The Sioux Spaceman was one of the very first Andre Norton novels I ever laid eyes on (other than The Last Planet and Daybreak — 2250). It was certainly one of the first Ace Doubles I ever encountered. It was first published in 1960, paired with Richard Wilson’s And Then the Town Took Off, with covers by Ed Valigursky (above).

The Norton volume was the first book in her Council/Confederation series, which eventually grew to encompass four novels:

The entire series was collected in an omnibus volume from Baen in 2009, The Game of Stars and Comets (2009; see below).

As usual, the Norton was eventually published as a standalone volume. It appeared in 1966 with a 40-cent price tag, and then again in 1969, at 60 cents. Below is the 1969 edition, with the Ace Double inside cover text re-purposed for the back cover  (although the 1969 edition had the good sense to drop the header Redskin Raiders On the Galactic Rim.)

The Sioux Spaceman is pretty short (133 pages); to pad it out a bit for standalone publication, Ace commissioned Lin Carter to write a 13-page essay, Andre Norton: A Profile, which first appeared in the 1966 edition, and in all future Ace editions (it was also used to pad out later editions of Secret of the Lost Race, as we mentioned last week.)

The Sioux Spaceman was re-published again in September 1974, this time with a brand new cover by Dean Ellis (below left); and then again in a slightly re-designed edition in 1984 (below middle).

Baen did a favor for Norton fans in 2009, with a handsome trade paperback omnibus collecting all four volumes in the Council/Confederation sequence, The Game of Stars and Comets. It appeared in June 2010 in a mass market edition (above right, cover by Bob Eggleton).

I think it must have been pretty hard to be paired with Andre Norton. Richard Wilson’s novel And Then the Town Took Off doubtless benefited from the longevity and popularity of The Sioux Spaceman, but after its original 1960 appearance, it disappeared without a trace. It’s mostly a curiosity today. Here’s the text from the inside cover.

The City That Ran Off the Map

The town of Superior, Ohio, certainly was living up to its name! In what was undoubtedly the most spectacular feat of the century, it simply picked itself up one night and rose two full miles above Earth!

Radio messages stated simply that Superior had seceded from Earth. But Don Cort, stranded on that rising town, was beginning to suspect that nothing was simple about Superior except its citizens. Calmly they accepted their rise in the world as being due to one of their local townspeople, a crackpot professor.

But after a couple of weeks of floating around, it began to be obvious that the professor had no idea how to get them down. So then it was up to Cort: either find a way to anchor Superior, or spend the rest of his days on the smallest — and the nuttiest — planet in the galaxy! 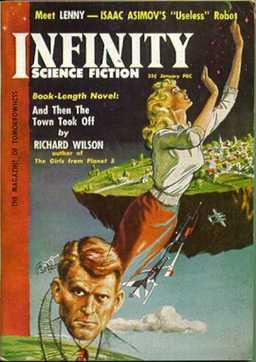 And Then the Town Took Off originally appeared as a two-part serial in the January and March 1958 issues of Infinity Science Fiction (right, cover by Emsh). Rich Horton reviewed the January issue for us here; here’s what he had to say about the first half of the novel:

And Then the Town Took Off has a goofy premise. A town in Ohio breaks loose from the Earth and starts to fly off. It’s told from the POV of Don Cort, a young man working for the Pentagon, who has something important handcuffed to his wrist when his train stops in Superior, OH. This becomes embarrassing when the town takes off.

It’s rather silly, so far, but I have to say I found it oddly engaging. Now I’ll have to read the rest. Perhaps I’ll track down its book publication — it became an Ace Double in 1960 (backed with Andre Norton’s The Sioux Spaceman).

It was thus Wilson’s second novel, of only three, though he kept publishing short fiction until 1989. He’s best known for his 1968 novelette, “Mother to the World”, which won a Nebula.

And Then the Town Took Off was reprinted as Armchair Fiction Double Novel #100 (this time paired with Wide-Open Planet by L. Sprague de Camp) 53 years after its appearance as an Ace Double, in May 2013.