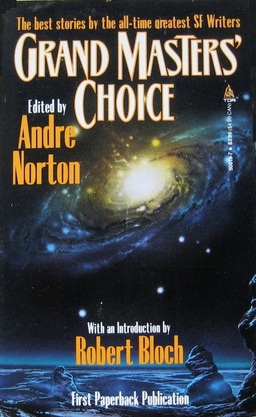 Back in 1988, there were only eight Grand Masters of Science Fiction. The Grand Master award is given by the Science Fiction Writers of America periodically to a writer with a lifetime of meritorious achievement. Robert A. Heinlein was the first, in 1975. (As of 2014, there are now 30; Samuel Delany received his award at the SFWA Nebula Awards banquet in May this year. See the complete list of winners here.)

For Noreascon III in 1988, NESFA Press invited Andre Norton to assemble a special collection of stories, one each from all eight Grand Masters — the story each author felt was their finest. The results were packaged with an introduction by Robert Bloch, plus comments on the individual stories by Andre Norton and her co-editor  Ingrid Zierhut, into Grand Masters’ Choice, a prestigious collection of SF and fantasy.

It’s interesting to see each author’s selection — and there are plenty of surprises. There’s a Fafhrd and the Gray Mouser novelette from Fritz Leiber, a Witch World novella by Andre Norton, a Reginald Rivers tale from L. Sprague de Camp, a Humanoids story by Jack Williamson, and four others.

Now, I probably have all of these stories in other collections. Somewhere. But I couldn’t resist this handsomely-packaged anthology, mostly because I’ve read almost none of the stories within and it was just too irresistible to have them all in one place.

The tales I’m most interested in reading are Andre Norton’s “Toads of Grimmerdale,”  which originally appeared in Lin Carter’s sword & sorcery anthology Flashing Swards! 2 — and which has been recommended to me several times in the past year — and “The Autumn Land,” a novelette by one of my favorite writers, Clifford D. Simak.

Here’s the blurb from the back of the 1991 paperback edition.

These eight great authors share a unique position in science fiction and fantasy. They are all Grand Masters of Science Fiction, as lauded by their peers, the members of the Science Fiction Writers of America.

Each Grand Master was asked to name that he or she felt was their finest short work produced during the career that earned this singular honor. The eight stories chosen by the eight Grand Masters comprise the main contents of this book. All the stories are memorable; many are reprinted for the first time in many years.

Also contained are essays about the authors, and an introduction by Robert Bloch. Altogether, Grand Masters’ Choice is a fitting tribute to eight of the greatest writers in the field, entertaining readers with the words they themselves are most proud to have written.

Grand Masters’ Choice was originally published in hardcover by NESFA Press in 1989 and reprinted by Tor Books in October 1991. The paperback version is 355 pages, priced at $3.99. The cover art is by Bob Eggleton. It is currently out of print and there is no digital edition. I bought a new copy online for $7.25 (including shipping).