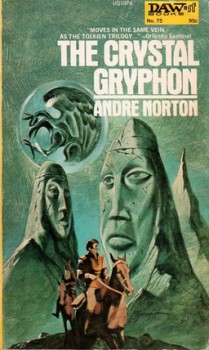 I started slowly working my way through Andre Norton’s splendid Witch World series three years ago. I’ve written several reviews for my site and Black Gate that you can read at the links.

In The Year of the Unicorn (reviewed here) we saw the end of the great war between High Hallack and Alizon. We go back in time to the war’s vicious start in The Crystal Gryphon (1972), the seventh published novel in the series.

The Crystal Gryphon is the first volume of a trilogy about Joisan and Kerovan, a young noblewoman and her husband, a prince tainted at birth by strange magics. Married in absentia when they were only six and eight respectively, the book is told in chapters narrated by one then the other. They hail from two distant parts of High Hallack, and are not to meet for ten years, when Kerovan comes of age. As the years pass, each must struggle to forge his and her way in a conservative land wracked by local power politics and a brutal invasion.

Kerovan of Ulmsdale was born in the ruins of a building erected by the Old Ones, the magically powerful race that lived in and vanished from High Hallack long before the arrival of men. The forces that still lingered in the place changed him, giving him slanted eyebrows over yellow eyes and cloven hooves instead of feet. His mother refuses to see him ever and his father, while declaring Kerovan his heir, gives him over to a crippled soldier to raise and train.

The orphaned Joisan lives with her childless uncle, Cyart, lord of Ithkrypt, and his widowed sister, Dame Math. Together, her aunt and uncle teach her to run an estate. When war with the raiders from the land of Alizon becomes imminent, basic sword and archery skills are added to her education.

Norton brings her two characters together slowly. Many chapters are dedicated to their respective fights to survive as their worlds crumble around them. About two-thirds of the way through The Crystal Gryphon, Joisan and Kerovan finally meet (though she doesn’t know his true identity), and we begin to see each through the other’s eyes. Dialogue and events from one chapter are repeated and reinterpreted in the next. It’s written skillfully, and the very different ways the two see events, and each other, is especially well done. 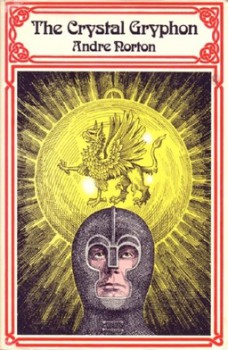 One of the great hallmarks of the Witch World books is Norton’s first-rate world building, and The Crystal Gryphon is no exception. While her conception of the invasion of High Hallack by Alizon was inspired by the real invasion of Yorkshire by the Danes in the 9th century, that historical event is only the basic framework for the book. Nearly every chapter has something to add to the constantly expanding back history of the Witch World

Through Joisan’s narration, we learn the culture of the dales of High Hallack, especially regarding the place of women. When she realizes her affections are being sought by those hoping to gain eventual control over her uncle’s domain, Joisan makes clear she understands how she’s seen by men:

I know that dalesmen look upon women as possessions, perhaps to be wooed and indulged for a season, and then, once won, to be part of the household like hawk, hound, or horse. We are bartered by our kin for our dowry rights, for alliances between dales. And in such matters we have no voice to oppose what we may fear or hate.

For a woman to set herself in opposition to any alliance made for her is to suggest she may have some commerce with a dark power. And if accused of that she can be in dire danger, even from those to whom she has the closest blood ties. But this does not make it an easy portion to swallow.

In many of the High Hallack stories Norton focuses on the powerlessness of women and how, if at all, they are able to overcome that state. It is usually only possible for the extremely lucky or uniquely gifted. 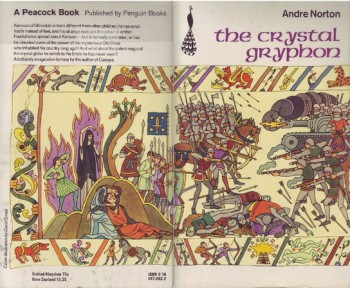 Kerovan, shaped by magic, is a student of the Old Ones and anything that remains of them. Increasingly large fragments of their culture and the extent of their powers are revealed in his chapters:

The road continued to weave through the foothills, and the carvings grew more complex. There were no more heads or faces. Now runes ran in complex patterns of lines and circles. Riwal reined in before one.

“The Great Star!” His awe was plain to see.

Surveying the complexity of that design, I could at last make out a basic five-point star. But the star was overlaid with a wealth of other curves and bits, so it took careful examination to make it out at all.

In this novel, as in most of the Witch World books, there’s a feeling of loss that permeates everything. Where great powers once walked only ruins remain. Only a fraction of the magic they wielded is known, let alone understood, by the people of High Hallack. 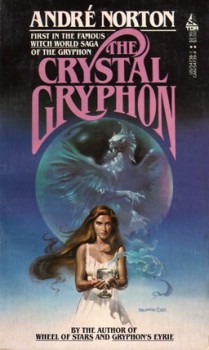 And there’s the violence. Norton writes about it tersely, never forgetting that it has a cost in bodies and souls. Even before the war the novel is littered with widows, widowers, and orphans, and by the end nearly everybody left is one of those things. When war does arrive, in the form of Alizon raiders armed with tanks and guns (presents from the main villains in Witch World and Web of the Witch World), Norton’s main interest is in how it affects its victims. High Hallack is transformed from a land of green pastures to one of smoldering villages and streams of refugees struggling through every step. Her descriptions of violence are never graphic, but implicit and wrenching. At one point Joisan refrains from describing what happens to a coffle of prisoners, but it’s clear that it is horrifying.

There are imperfections in The Crystal Gryphon. As in many of the Witch World stories, especially the ones like this, at the beginning of a cycle, potent magical talents barely hinted at suddenly manifest themselves and help save the day. No clues about life-changing secrets are dropped, ever, and then, BAM!, the secret’s revealed. Characters, only minor players through most of the book, prove to be important to the fate of Joisan and Kerovan. I suspect the use of sudden revelations is a remnant of pulpier days, and somewhat hard to avoid when the paperback is only 192 pages long.

Some readers, raised on the thousand-page tomes of today, may find the Witch World books too thin — in pages, and in endless detail. If, however, you want well-told stories in books that won’t demand untold hours to read, I can’t recommend these enough. All of the books are available at Amazon, brand new and used. Many are even available as e-books.

The other two books in this cycle are Gryphon in Glory and Gryphon’s Eyrie. The latter was co-written by A.C. Crispin.

I read this as a teenager and still remember the cover you show here – ie, the one stylistically based on the Bayeux Tapestry – almost better than I remember the story!

@Aonghus – It’s a new one to me (Thanks, isfdb!) It’s one of the most beautiful I’ve ever seen. It’s filled with perfect little details that seem to indicate the artist, David Smee, read the book.

I’m trying to remember if I ever actually read this one or not (and if I did it would’ve been a US edition), but yes, I love that Peacock cover!

@Joe H. – I grew up only seeing the DAW cover, which I really like. But, yeah, the Peacock one is great. I was very happy to find an image of the entire dust jacket.