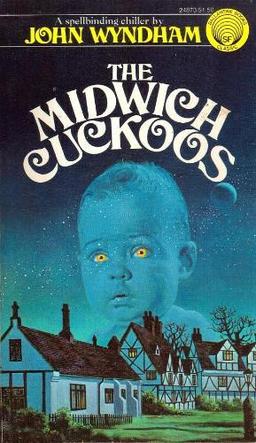 John Wyndham’s first SF story, “Worlds to Barter,” was published in the May 1931 issue of Wonder Stories, one of the very first pulp magazines I ever bought (which still brings back fond memories every time I see the cover). It appeared under his pulp pseudonym, John Beynon Harris, and alongside “Through the Purple Cloud” by Jack Williamson, and stories by Fletcher Pratt, Ed Earl Repp, and an editorial by Hugo Gernsback. Wyndham was just 27 years old.

The Midwich Cuckoos was first published in hardcover in the UK by Michael Joseph in 1957, and made into the classic SF film Village of the Damned in 1960 (and remade by John Carpenter in 1995).

A nightmare tale of a quiet English village where nothing ever happened until late one September night, when every woman in town became inexplicably pregnant…

Today The Midwich Cuckoos is something of a neglected classic. It has been out of print in the US since the Del Rey paperback edition shown at right was released in May 1980. It is 189 pages, priced at $1.50. The cover is by Dean Ellis. An ebook was published in July 2010 by RosettaBooks, and that’s probably your best bet if you’re trying to track down a copy.

This book has been out of print that long? Someone should fix that toute suite – it’s a really good one, much better (in my opinion) than the Day of the Triffids.

I suspect most John Wyndham is out of print these days… there aren’t a lot of SF novels from the 50s in print of ANY kind, not even Asimov and Clarke. Maybe Heinlein and Dick, but that’s about it.

Do American shops never stock all the more recent Penguin editions of his books?

Here’s the current ones stocked in the UK.

It looks like Penguin does not have the rights to distribute John Wyndham here in the US. Many of his novels (with the exception of The Midwich Cuckoos, The Kraken Wakes and Trouble With Lichen) are in print through NYRB Classics here in the US: