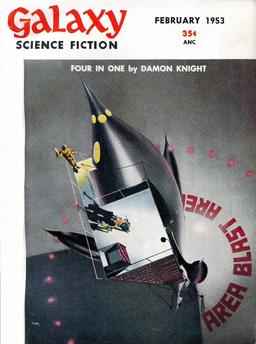 Galaxy Science Fiction continued its momentum into the February, 1953 issue. Boldy asserting it only published original stories (no reprints), it drew the finest science fiction authors of the time.

“Four in One” by Damon Knight — George Meister and his team establish a base on an alien planet and begin to explore the surroundings. The four of them fall down a ridge and are consumed by a strange, slug-like organism. The only thing remaining of the humans are their brains, eyes, and spinal columns. Amazingly, they can each influence the organism as though it’s part of their own body, which is essentially the only body any of them have. Though George, as a scientist, wants to spend time analyzing the creature, the others are divided as to the next step to take. And they begin to take more aggressive actions, such as forming appendages that might be able to kill any opposing brains.

This is such a unique story that it’s a good read just for that reason alone. But the characters and tension also work well together. There’s a bit of a gross factor involved, I suppose, but I hope that doesn’t dissuade readers.

“Protective Mimicry” by Algis Budrys — Someone is counterfeiting galactic money, but the bills are perfect duplicates, down to the serial number. The treasury’s chief inspector sends a man named Baumholtzer to investigate where they turned up – a humid, heavily-forested planet named Deneb XI. Baumholtzer heads to the only city on the planet and finds a bar that knows how to make his drink. Unfortunately for Baumholtzer, the person behind the duplicate money knows he’s coming.

It’s a nice detective story with great descriptions. I wish it had been longer, but it moves at a good pace, so maybe expanding it wouldn’t be a great idea. I just liked the feel of the narration so much that I wanted to keep going. 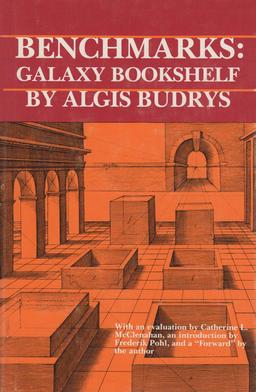 Budrys would become more involved with Galaxy in later years as its book critic. In 1985, a collection of all 54 of his Galaxy book reviews was published in a book titled Benchmarks: Galaxy Bookshelf.

A quote in the book (according to a synopsis I found online) explains Budrys’ stance as a critic:

Writers of imperfect, tousled books should be made aware that standards of breeding and grooming exist. I strive to fulfill that function.

“Saucer of Lonliness” by Theodore Sturgeon — A woman encounters a small alien spacecraft in front of a crowd. The aliens talked to her, but she won’t — or can’t — tell anyone what they said. Over time, she becomes ostracized by society and isolates herself. But then someone seeks her out — someone who might actually have compassion.

Sturgeon loves his characters, and he writes them with care and compassion. I felt that there was a deeper theme within this story that I just didn’t glom onto for some reason. This story was later adapted for radio (X-Minus One) and TV (The Twilight Zone).

“Watchbird” by Robert Sheckley — Robotic probes monitor the Earth, programmed to prevent murder and to learn. Over time, their definition of murder expands to the protection of animals, plants, and themselves.

This has a classic science fiction plot and dilemma. Humans created a device that works too well or works in an unpredicted way, but the quickest option to stop it causes a different problem. It’s not a bad story, but it’s a theme that felt too familiar to me. Perhaps that’s one of the problems of looking at past works — the limitations of being able to appreciate the novel ideas at the time they were novel. 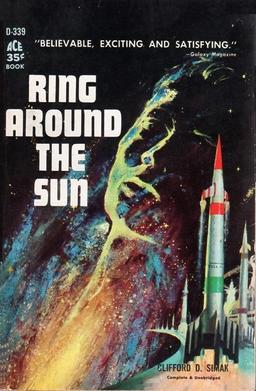 “Know Thy Neighbor” by Elisabeth R. Lewis — Ellen lives alone in her apartment building. It’s not the best side of town, but the building is safe. At least, it seemed safe until she discovers a monster in the incinerator chute.

I was surprised to find a bit of horror in the magazine. Some might argue it’s science fiction, and that’s fair. I would say the horror aspects, or even classifying it as horror, lends it more weight and accuracy. I like how the story opened (stating that there was a monster in the incinerator chute), then went back and built the plot in a suspenseful manner. I haven’t been able to find any other information on Lewis. Maybe someone can help out <ahem>Rich Horton<ahem>.

Ring Around the Sun (Part 3) by Clifford D. Simak — Vickers returns to the first Earth to help humanity and thwart the industry leaders who refuse to relinquish control. He’s also faced with the reality that his true self was placed in hibernation while his consciousness was split among three android bodies. Worse than that is the realization that one of those bodies is the woman he loves.

There’s much more happening in the third part of the novel. I realize that I’m spoiling it to some degree just in describing what happens within each section, so if you haven’t read the novel, forget what I’ve written and go read it. It’s a complex tale, exploring the evolution of mankind (somewhat similar to Stan Lee’s take in X-Men), parallel worlds, androids, and immortality.

Matthew Wuertz’s last retro review for us was the January 1953 issue of Galaxy Science Fiction.

I love “A Saucer of Loneliness”, it’s one of my two or three favorite Sturgeon stories.

“Four in One” is a great story too. Bob Silverberg wrote a good essay analyzing how Knight does what he does in that story.

I’ll have to try to find that essay. “Four in One” was really well done.

But Rich…. what’s the story with Elisabeth R. Lewis?

Yes! Thank you, John. I completely forgot I called Rich out on that. Don’t leave us hanging, Rich!

I know nothing more of Elisabeth Lewis … this truly seems to be the only thing she published.

Thanks again for including me in this discussion, Matthew. It is something I look forward to every month.

February 1953 was not as good as the last issue, but still has enough excellent stories to make it worth the time. I read it on my breaks during a two-day parent-teacher conference marathon while I sat in my portable yurt in our middle school gymnasium. I am not making this up. I have pictures.

Mr. Gold’s editorial about kids and toys was not interesting. Science Fiction readers ALWAYS want to play with the box, no matter how cool the toy is. We have imaginations. He missed that important point and instead writes a predictable essay about generational differences. Mr. Gold’s nickname is now Captain Obvious until he writes an editorial that makes us ponder and discuss.

“Four in One” presents one of the more uncomfortable predicaments that I have read in quite a while. Imagine having you and three friends (or enemies) consumed by an alien creature and having your brains and nervous systems live on inside said creature. Of course you can communicate, after some trial and error, grow limbs and, well, you really should read it. I did see the ending before I got there, but that does not take away from this amazing story. Kudos to Damon Knight.

I really enjoyed “Protective Mimicry” by Algis Budrys. It begins as a standard detective story and then seamlessly brings in the speculative elements. I did NOT see the resolution or the last-sentence twist coming. Only science fiction could make counterfeiting this interesting.

Theodore Sturgeon follows with the beautiful “Saucer of Loneliness.” Anyone who has ever felt lonely and misunderstood (show of hands? I thought so) will shed a tear when they read this one. I don’t know how to praise this story without giving too much away. Everything from the beach setting to the descriptions of our poor protaganist’s feelings made me feel like I was in this story with her, or at least wanted to be. The bittersweet ending is perfect.

Willy Ley then discusses global warming and the four dimension, both spatial and temporal. How much controversy did a discussion of global warming cause in the fifties? I suspect we were much more concerned with communists back then. Regardless, it is a good essay.

Next is “Watchbird” from Robert Sheckley (what an all-star line-up!) So we have robotic birds that can stop a murder before it happens. The birds can learn and improve (?) their sensibilities, and of course there are unintended consequences, to say the least. This is an ok story that I found too predictable. Maybe in 1953 the “technology may have unintended consequences if we are not careful” theme wasn’t too played out. It is now.

Elisabeth Lewis contributes the last short story in “Know thy Neighbor.” Our hero, Ellen, knows there is something amiss in her apartment building and handles it with as little sensibility as a person possibly could. When you find body parts in the trash chute, of COURSE you should reach in and pull it out. Dead cat on the window sill? That’s no reason to be alarmed. After all, Ellen is “27 years old and…not married. Any psychiatrist will tell you that’s enough cause for neurosis.” Of course she chooses the wrong person to give assistance at the end. If this was a movie, we would all be shouting “NO, STUPID! SHE IS THE ALIEN!” and the demand our money back. This was amusing but not up to Galaxy standards in my opinion.

Finally, we are treated to the last installment of “Ring Around the Sun,” from Clifford Simak. This gets complicated. Jay Vickers and Ann have a potential romance with some definite potential issues, not to mention the problem of everyone wanting him dead. There is no way I am going to try to summarize all of this (I am sure Matthew has done an excellent job of that :)). The interwoven storylines come together nicely at the end. Just imagine if your sworn enemy turns out to be your…well, again, you have to read it.

Thanks again, and see you next month.

Gus, thanks for your comments. I read most of the issue while camping in the woods. Alone. Look up my personal website and find my post: Writing and Camping. 🙂

I enjoyed your camping article. There is something about being in the wilderness that enhances everything you read or write. My wife and I take an annual trip across a mountain lake in our kayaks and camp where there are no plug-ins or bathrooms or, anything really, except trees and critters and spectacular views. I always load up with back issues of F&SF and Galaxy to read while we are gone. I am not a writer, but I can see how a camping experience can infect your work, rather than sitting at home on a couch or at a desk. Thanks for sharing that article.