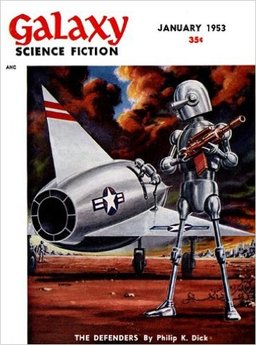 Galaxy rolled along into a new calendar year. Elsewhere in the United States, Dwight D. Eisenhower was about to begin his first term in office, succeeding Harry S. Truman. It’s amazing to sit back for a moment and realize how long ago all of this great fiction was published.

“The Defenders” by Philip K. Dick – Humanity has been underground for years while the United States and Russia fight a nuclear war. On the surface, robots called leadys fight for humans, detonating bombs that destroy and irradiate the earth. It’s a harsh life for humans, drudging out their years without sunlight, struggling to survive while producing weapons to win the war. Taylor gets called from his rest period to go with a team to the surface to investigate some inconsistent reports from the leadys. It’s a dangerous assignment, given the amount of destruction and radiation awaiting them, but it’s not one he can refuse.

I didn’t want to give more of a description in fear that I might spoil the story. It has a couple of surprising points – the first of which is somewhat easy to guess. It has a classic, Cold War feel to it, which adds to its charm. Philip K. Dick used the story as a basis for the novel The Penultimate Truth, published in 1964.

“Teething Ring” by James Causey – An alien visits Melinda at her home, though she doesn’t realize he isn’t human. The strange man asks to survey her in exchange for one of his devices. Although she selects something for herself, her toddler son takes interest in a neural distorter and won’t be dissuaded. Melinda offers the man a dollar for it and gives it to her son; after all, it keeps him quiet.

It’s a lighthearted tale, but I didn’t find it that interesting. It does, however, make for a good relief between “The Defenders” and “Life Sentence.” 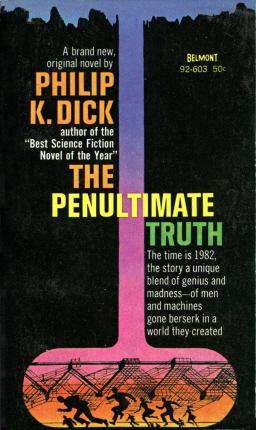 “Life Sentence” by James McConnell – Oliver Symmes murdered two people, something unheard of in present society. His sentence is an unnaturally extended life where he can be studied and experimented on in hopes that such a crime is never repeated.

This is a somber story, but it’s beautifully written. Allow me to share an excerpt:

Shadows. For so long there had been shadows. And for a time the fleeting passage of dreams and past memories had been a solace. But now the shadows were withered and old, debilitated and desiccated. They had been sucked dry of interest long ago.

But still they flitted through his mind on crippled wings, flapping about briefly in the now-narrowed shell of his consciousness, then fading back among the cobwebs. Every once in a while, once of them would return to exercise its wings.

“The Inhabited” by Richard Wilson – An invisible alien can enter the body of any animal or human it wishes, sharing the experiences of its host. Its mission is to determine if Earth is a place for its species to invade. The only issue is that the visitor can’t control its hosts, even with the simplest command.

I liked the premise of the story. And even though the main character was on a mission to take over the Earth, I felt bad for him, due to the nature of his species. Richard Wilson contributed science fiction over multiple decades and won a Nebula Award for his novelette, “Mother to the World,” in 1969.

“Prott” by Margaret St. Clair – The main character is in deep space to study the prott – a species which inhabits the vacuum of space. Little is known of them, but the main character hopes to use telepathy to communicate with them and understand more about them. 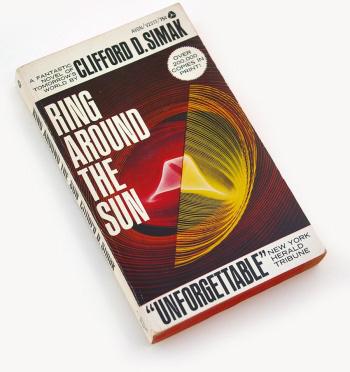 There’s something about fiction written as diary entries that I find appealing, so my enjoyment of the tale may be somewhat biased on that point alone. But I like the style along with the interaction with the aliens. The only thing I’m a bit uncertain of is the ending itself; I still can’t decide if I liked it or not.

Ring Around the Sun (Part 2) by Clifford D. Simak – Vickers drives his forever car into a town, stopping to eat and rest. While he’s in a diner, the townspeople upturn his car. Vickers learns that the media has reported that the new devices, like the forever car, were produced by mutants to overthrow the human race.

Fearing that someone may associate him with the car, Vickers tries to flee, only to end up trapped in a building while people search for him. His only escape is a painted top from his childhood, for when he stared at it as a child, he could transport himself to another Earth. So he uses the toy, as impossible as it seems to his adult mind, and after several tries, he succeeds.

He emerges on a new Earth, one identical in landscape to his Earth but without any signs of civilization. His goal is to reach the Preston house – a place he found as a child in his hometown. But he’s far from there and only able to travel on foot, hunting and foraging for food the entire journey.

When he reaches the house, he learns of his origin and the purpose the mutants intend for him. His interest, however, is finding the love of his youth, but both goals may align.

There is a lot to this story, and it’s well written. The scenes from the second Earth are beautiful and feel like the quieter parts of an adventure fantasy tale. I’m excited to find out how the novel ends.

Matthew Wuertz’s last retro review for us was the December 1952 issue of Galaxy Science Fiction.

January 1953 is an excellent issue. December was an average issue by Galaxy standards, but this one was amazing.

Mr. Gold begins the issue with a discussion of widely held beliefs that he means to dispel. These are not common discussion points in my social circles (inflation, war), but maybe they were relevant in 1953. Not very interesting to me.

I actually don’t have a social circle. More like a triangle.

Philip K. Dick starts the fiction with “The Defenders.” Machines and robots run the surface of the earth while humanity has hidden underground from the fires, nuclear fallout, etc. Mankind is not the ruler of the earth as he would like to believe. This is a compelling, though somewhat predictable story.

I am studying Mr. Dick’s stories closely as I come to them to see if I can understand why he built such a loyal, cult-like following. He does a nice job of unfolding the secrets of this story and working in some human elements (Taylor’s wife, Mary, is worries sick about him going to the surface).

“Teething Ring” is a cute short story. Once again, the 1950s mom is not afraid to let a stranger enter her house alone with herself and her infant child. That kind of naivety always amuses me and makes the story less believable to me. The story does succeed as a work of humor, and the ending is worth a chuckle.

“Life Sentence” is maybe the darkest story in Galaxy to date. Wow. It is always hard to say I enjoyed such a depressing story, but I certainly did. Imagine wanting nothing other than wanting to die but being denied the opportunity as your body falls apart. Heavy, emotional stuff.

“The Inhabited” gives us one more look at an alien that can travel from mind to mind (didn’t we just do this an issue or two ago?). This poor being is desperate for something to do and fails at every attempt at mind control he tries. I don’t know if this was a terribly thoughtful story but it is entertaining and even a bit amusing. The psychiatrist is a interesting character to follow and to guess at his true level of belief or disbelief.

Margaret St. Clair shows up a lot in issues of Fantasy and Science Fiction in this same era (also as Idris Seabright, of course). I always enjoy her work. “Prott” is written as a found journal narrative which builds compellingly around contact with an alien force that our poor hero never quite understands. His slow realization of his predicament and the inevitable dark ending are quite effective.

“Ring Around the Sun” has everything in this installment. I hate to spoil any of it, but our hero Vickers goes from joyriding in a forever car, to running from police and a mob, to a cross country wilderness adventure ending at a most unusual homecoming, and on and on to a rather profound moment of self-discovery. The character narrative ends with speculation about the ring of planets around the sun, lost knowledge due to human deaths, immortality, and other mind-spinning topics. This is a huge risk for any author to try to be this profound, and I think Mr. Simak nailed it. The topics flowed seamlessly from one to the next in a perfect crescendo to the ultimate epiphanies at the conclusion, setting up the final installment, which I can’t get to soon enough.

It is maybe a bit petty of me to point out some editorial problems here, but I can’t resist. The last four chapters are numbered 35, 36, 35, and 36 (in roman numerals). The end of chapter 34 (page 139) has an interesting sentence, which I think my high school English teacher would have called a dangling participle:

“The woman came to the door of the house, built of peeled logs.”

Not that anyone cares, but…

Other magazines read in the last month:

F&SF Nov.-Dec. 2015. Awesome issue with a lot of great stories. “Gypsy” was a real coup for F&SF. This amazing story would have been right at home in one of the Dell magazines but somehow Mr. Finlay stole it. Nice.

Beyond Fantasy Fiction Sept. 1953. Another excellent magazine from Mr. Gold. The evolution of fantasy is interesting. From horror and sleaze in the 1930s and 40s, to contemporary, mostly urban settings in the 1950s, to Howard and Tolkien influences in the 60s and beyond. This is a good magazine that only lasted ten issues, so I have decided to work my way through them.

On Spec, Spring 2015. Yeah, they are a bit behind on their publishing schedule and this magazine appears to be hanging on by a thread. I enjoy their quirky stories and I hope to see many more of them. This is their 100th issue.

F&SF January 1998. I have about 200 issues left before I have read the full run (I am not going in order but taking one random year at a time). The variety and quality in this magazine keep me going. PLEASE read “Reading the Bones” by Sheila Finch. Creepy and stunning.

Knights of the Dinner Table #225. Bob is stuck in a dead letter office in Tennessee because Brian decided to save money by sending him “freight” instead of “overnight.” Explaining the rest of the story would take several pages. Hilarious.

Thanks for sharing your thoughts. “Life Sentence” is just powerful. It’s dark (not sure I’d say depressing but I get where you’re coming from), but the writing is wonderful.