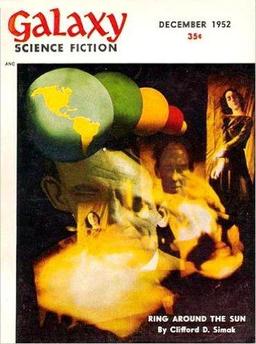 The cover of the December, 1952 issue of Galaxy Science Fiction was creating using a technique called “Camerage.” Editor H. L. Gold describes it as

A three-dimensional montage effect — but it’s not a montage… All the objects in the picture are assembled at one time, illuminated by projected colored lights… and are shot by a number of cameras placed on different planes.

To me, it looks a little odd — or at least this particular use of the technique looks a little odd. (Click the image at right for a bigger version.) Seeing an image online doesn’t quite match up with what you see on an actual copy of the magazine; I can’t quite explain the difference. But however you view it, the cover still doesn’t connect with me.

Ring Around the Sun (Part 1) by Clifford D. Simak — It started with a few inventions — a cigarette lighter, a razor blade, and a light bulb. These items would last forever, the manufacturers claimed. Additionally, another group supplied synthetic carbohydrates for consumption, helping humanity’s food supply. Each had its own effect on the economy, in both subtle and obvious ways.

Jay Vickers learns of the newest arrivals — the forever car and the forever house — with indifference. He doesn’t need a new car and doesn’t like the idea of a new house, no matter how reasonable the financing may be, even if it seems like they’re being given away.

A group of industry leaders, represented by a heavy man named Mr. Crawford, focuses on Vickers as someone to write a book about the new inventions. They’re concerned about each sector being closed down by these anonymous groups, which are more than likely part of the same organization. The industry leaders need the public to avoid the new products, but they can’t come right out and advise people to support their own substandard products simply to keep their businesses around. 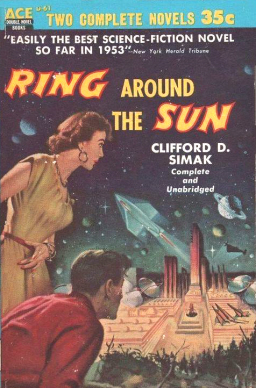 Vickers has little interest in the project, even with as much money as they’re willing to pay him. But Crawford reveals that it’s not just his skills as a writer they’re interested in. Crawford thinks the anonymous gadget-makers are advanced forms of human life, and he believes Vickers is one of them, though he may not yet realize it.

Ring Around the Sun was published in book form in 1953, and as an Ace Double in 1954 (see our survey of the various editions here). Part 1 reads well, but I’m not sure I care much about Vickers. He’s not a flat character; he’s just self-absorbed.

“Homesick” by Lyn Venable — A small crew of space travelers sit together with sullen moods. Their mission is long complete, yet they remain aboard their ship. Having spent so many years in space in an extremely sterile environment made them unable to live in Earth’s environment.

So they remain on Earth in their grounded ship, living the rest of their days in confinement, isolated and miserable. I’m not sure how plausible the story is, but it’s an interesting premise.

Lyn Venable is a pseudonym for Marilyn Venable. She didn’t write a lot of stories, but the one she’s known best for is “Time Enough at Last” (published in If: Worlds of Science Fiction in January, 1953, cover below right), which was used as the basis for the Twilight Zone episode of the same name. Burgess Meredith starred as bookworm Henry Bemis who just wants to find more time to read. And if you’re thinking, “I don’t remember any such episode,” then drop everything and find this episode somewhere, somehow. It’s one of the best TZ episodes ever. 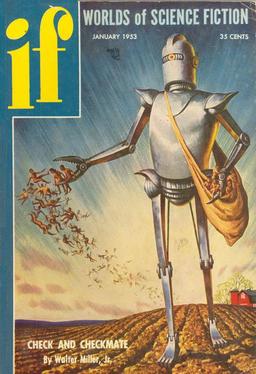 “The Reluctant Weapon” by Howard L. Myers — Earth has become a minor threat to the Hovans, who rule the universe. Rather than sending their own military to attack, their leader decides to consult the Weapon, an ancient artificial intelligence with the power to destroy entire worlds. The Weapon, however, wants to speak with a human first, in order to gain a hatred toward the entire race and fuel its attack. So the Hovans choose one of the worst ones in captivity — a man named Jake, who is a farmer from Tennessee. Jake wastes no time in irritating the Weapon, simply by being himself.

I liked this story; it had humor and interesting characters. Myers contributed a lot of science fiction in his career, mostly in short form. Unfortunately, he died in 1971 at age 41.

“The Leech” by Phillips Barbee — A speck of cosmic dust lands on Earth. The speck is actually the seed of an organism with a voracious appetite. It can devour anything it contacts, converting the matter to energy and then converting that energy into enlarging its body. As it grows, it draws the attention of scientists and the military, who attack with weapons that only serve to feed the creature, adding to its mass.

This was my favorite store of the issue. Had this been written a bit differently, it could have been classified as horror. The story has suspense, good pacing, and a surprising end. Barbee was actually a pseudonym for Robert Sheckley. This is another Galaxy issue with two stories from the same author (in this case back to back), but Gold obviously thought he should disguise that a bit. 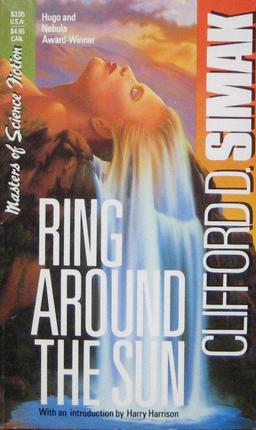 “Cost of Living” by Robert Sheckley — On Carrin’s day off, he meets with the Avignon Electric finance man. AE has offered many products — the shower, the Auto-towel, the Wall-reminder, and more. Life is so convenient, yet to continue in such luxury, Carrin needs to sign 30 years of debt to his son. It’s hardly anything, compared to what one of his neighbors is doing — pushing debt down to his grandchildren. Besides, Carrin inherited his father’s debt; it’s simply what people do.

There are some obvious remarks about consumerism in the story, told in a tongue-in-cheek manner. And though it’s an exaggeration of consumerism, it’s actually not off the mark at all when considering the national debt of the United States that literally is being passed from one generation to the next.

If I were Sheckley and had a pick which story to put my name to (between “The Leech” and “Cost of Living”), I would have picked “The Leech.” Or maybe just be smug and put my name on both.

“The Deep” by Isaac Asimov — A planet orbits a dying star, and the inhabitants have few choices. There’s no other planet in the system to flee to, and no other system close enough to travel to. They choose instead to burrow toward the planet’s core, drawing from its heat as long as it lasts. After thousands of years and accumulated knowledge and planning, the race decides to transport themselves to another world that’s now within reach. But to do so, one of them must make telepathic contact with someone on the remote world and activate a device they can use for transportation.

The plot and alien race worked well together, and I think this is one of the better Asimov stories I’ve read in Galaxy so far. He found a way to connect something alien to something deeply ingrained in humanity without overdoing it emotionally.

Matthew Wuertz’s last retro review for us was the November 1952 issue of Galaxy Science Fiction.

Thanks — the Vintage Treasures features are Black Gate favorites of mine.

Myers’ career is interesting (and a bit sad). “The Reluctant Weapon” was his first sale, and it was 15 years before he made another sale. He did much of his later work as by “Verge Foray”, one of the stranger names used by late-period Analog writers. As you note, he died very young, a bachelor (still living with his mother). I find his work fitfully interesting but not really as a whole terribly successful, and the sexual politics are, to put it mildly, disquieting.

As for the Sheckley pseudonym, I suspect he had no choice about using his name for both stories. I imagine Gold insisted on a pseudonym. I think “The Leech” is less characteristic of Sheckley’s most common satirical mode, and that’s probably why it got the pseudonym.

Rich – I’m pretty sure Gold insisted on Sheckley’s pseudonym usage as well and may have even picked the story to assign it to.

Thanks for sharing about Myers. 15 years is a long span between sales.

I am a bit late again this month. Busy school year underway. Wow, I have read the first three calendar years of Galaxy. I enjoy each one of them, but this issue is not high on my list.

The camerage cover did nothing for me. He sounded so excited, but I don’t see it. Kind of a mess.

Ring Around the Sun reminded me of a story I read in F&SF a few years back about a machine that gives you anything you want. The ultimate result is, of course, destruction of the global economy. It does make you wonder if poor efficiency results in more jobs and a better overall economy. Anyhoo, I am enjoying the story and I am sure Mr. Simak will find a new wrinkle to keep me reading. Jay Vickers is an unremarkable hero (?), and his involvement with these new products is peripheral and a bit puzzling.

There isn’t much to Homesick other than some unhappy characters in an unenviable situation. Yes, an interesting premise, but the story doesn’t really develop it much.

That episode of The Twilight Zone is delightfully evil. “I’ve got all the time in the world…” Yes, I remember that one.

The Reluctant Weapon is a story that I am not sure why I enjoyed. I was expecting action and got mostly dialogue. I suppose the success is in the meeting of two minds that could only be this different in a science fiction setting.

I saw Xanadu for the first time this month and I enjoyed that also, though I am not sure why. Please don’t tell anyone that I admitted to liking that movie.

Once again we agree on the favorite. The Leech presented an seemingly insurmountable problem and another deliciously evil ending after the solution (…) was finally found. I really enjoyed watching this one unfold and musing over what they might do.

Cost of Living uses economics as a base for speculation, which is always interesting. Just how much debt are we willing to incur for our conveniences? This story seems outrageous, yet, I would guess that a lot of people would enslave their descendants for any kind of convenience. That is cynical, but, think about all of the short-sighted people you know. I would love to dismiss this story as ridiculous, but it isn’t.

Asimov takes us on quite a ride in The Deep. Following the alien mind around the airplane was fun, and the ending was a nice way to wrap up a story that seemed to have no good resolution. The subplot of human contact and parental relationships was nice.

See you again next month!

Gus, thanks for sharing your thoughts. We seem to line up quite a bit this month. I’m looking forward to Simak’s serialization. I’ve already started next month’s issue… hopefully it will be more to your liking. 🙂