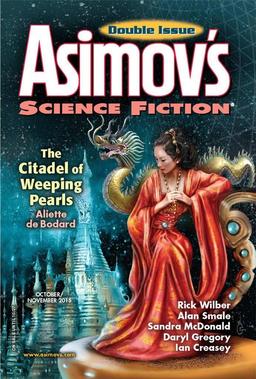 Asimov’s Science Fiction October/November issue — the traditionally “slightly spooky” issue — contains a huge new 34,000-word novella from the brilliant Aliette de Bodard, the sequel to her Hugo and Nebula Award nominee, On a Red Station, Drifting, plus stories from Alan Smale, Ian Creasey, Rick Wilber, Ian McDowell, and many others. Here’s the description from the website:

Aliette de Bodard’s October/November 2015 cover story is an enormous new novella that plunges us into a far future where various factions struggle to find the lost “Citadel of Weeping Pearls.” Success will require travel through time and space. The journey could result in death, or it could give the empire the weapon it needs in a war against archenemies.

Our traditionally “slightly spooky” issue is full of outré stories of the macabre. A trio of tales makes use of English and Irish locales and lore. Alan Smale entices us to the West Midlands for a chilling look at “English Wildlife”; Ian Creasey draws us further north to York, and, then through hyperspace, to listen while a young girl spins a sinister yarn about “My Time on Earth”; and Rick Wilber takes us from the beaches of West Ireland to the coast of Massachusetts for one character’s just rewards in “Walking to Boston.” We remain in the U.S. for Sandra McDonald’s ghostly account of “The Adjunct Professor’s Guide to Life After Death”; venture to the old west for Ian McDowell’s uncanny legend of “The Hard Woman”; and voyage through time with Timons Esaias to find out what happened in “Hollywood After 10.” Daryl Gregory escorts us to another realm for a surprising twist on a familiar tale of witchcraft in “Begone”; and new author Brooks Peck lures us to a space station in Earth’s Orbit to view the consequences of living “With Folded RAM.”

The striking cover art this issue is by Maurizio Manzieri, for “Citadel of Weeping Pearls.”

Non-fiction this month includes Robert Silverberg’s Reflections column, which praises Star (Psi Cassiopeia), a forgotten nineteenth-century interstellar space opera; Norman Spinrad’s On Books, which examines today’s hard SF in “The Real Deal”; and James Patrick Kelly’s On the Net, which informs us that “We Have the Technology” to create the posthuman era.

There’s also an array of seasonally spooky poetry and other features. Here’s the complete Table of Contents, with links to story excerpts.

The October/November issue was available on newsstands on September 15. It will be on sale until October 27.

Asimov’s Science Fiction is edited by Sheila Williams and published by Dell Magazines. The cover price is $7.99 for 192 pages; a one-year subscription is $34.97 (US) or $49.97 (International). It is also available in a variety of digital formats. The cover this issue is by Maurizio Manzieri, for “Citadel of Weeping Pearls.” Check out the complete TOC, story excerpts, and additional free content at the website.

We last covered Asimov’s SF here with the September 2015 issue.

The cover art is gorgeous. It has a pulpy feel that I like. With so much bland cover art these days it is refreshing to see something like this.

Agreed! I haven’t read the story yet, but that art makes me want to. 🙂

I really need to read Aliette de Bodard’s SF — what I’ve read of her fantasy (the Obsidian & Blood trilogy and House of Shattered Wings) has been excellent.

I haven’t read HOUSE OF SHATTERED WINGS yet, but I’m really looking forward to it. I met Aliette here in Chicago at the Nebula Awards in June, and she’s as fascinating and charming in person as she is on the page.