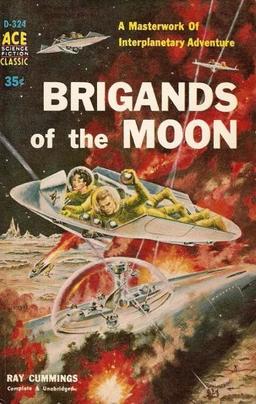 Rich Horton’s personal blog, Strange at Ecbatan, is a great place to hang out if (like us) you love vintage paperbacks and magazines. In addition to his reviews here at Black Gate (not to mention his editing duties for The Year’s Best Science Fiction & Fantasy, the 2015 Volume of which just arrived last month), Rich also reviews forgotten bestsellers, neglected classics, and obscure books by writers who later became highly regarded. This week he takes a look at an Ace Double from 1961.

This week’s Old Bestseller post is on a book that was by no means a bestseller — it’s another Ace Double review, this time a new one (for me) — the 1961 pairing of a rather dreadful 1932 pulp serial by Ray Cummings (Wandl the Invader) with one of John Brunner’s better early short novels (I Speak For Earth), written as by “Keith Woodcott.”

Wandl the Invader was serialized in Astounding in 1932. It was a sequel to Brigands of the Moon, which began its serialization in the third issue of Astounding, in 1930. It is set in a future in which space travel is well-established within the Solar System, and essentially human civilizations have been discovered on both Venus and Mars. (Interbreeding is possible, for instance.) A small planet called Wandl has appeared in the Solar System, and Gregg Haljan (hero of Brigands of the Moon) is recruited to captain a spaceship to resist the evil intentions of the planet’s inhabitants.

The opening sections have some interesting ideas an images, such as a roofed New York. Haljan and his buddy Snap, along with their girlfriends, Anita and the Venusian Venza, first investigate the appearance of a Martian pirate and his sister, Molo and Meka. It turns out the Martians are in league with the invaders from Wandl, who turn out to comprise controlling all-brain creatures… You can see that Cummings had talent… [but] I’d say the stories really deserve to be forgotten, by and large.

I Speak for Earth revolves in one way around a very familiar idea: the alien Federation of Worlds has discovered Earth. They are quite perturbed by humanity’s history of violence, but improvements are being made. Still, before they allow the first human starship to be completed, they want to evaluate humanity’s worthiness to join the Federation. To that end, they have asked us to choose one representative to travel to a Federation world and spend a month there — after which that person’s behavior will serve as a benchmark for the decision on whether humans can travel to the stars…

The neat wiggle Brunner introduces is this: humanity’s leadership (the UN) decides that it is ridiculous to send just one human as a representative. So they choose six people, very accomplished people from a variety of cultures, who represent a variety of high achievement, and use a newly developed technology to allow one man’s mind to host five additional minds… The bulk of the story covers the time the six people spend together, learning about each other, then (by surprise) being integrated into one mind.

The Sioux Spaceman / And Then the Town Took Off by Andre Norton and Richard Wilson
Secret of the Lost Race/ One Against Herculum by Andre Norton and Jerry Sohl
Clockwork’s Pirates/Ghost Breaker by Ron Goulart
ATTA/ The Brain-Stealers by Francis Rufus Bellamy and Murray Leinster
The Ship from Atlantis/ The Stolen Sun by H. Warner Munn and Emil Petaja
Vulcan’s Hammer / The Skynappers by Philip K. Dick and John Brunner
The Ship That Sailed the Time Stream by G.C. Edmondson
Bow Down to Nul / The Dark Destroyers by Brian W. Aldiss and Manly Wade Wellman
Gateway to Elsewhere / The Weapon Shops of Isher by Murray Leinster and A. E. van Vogt
The Cosmic Puppets / Sargasso of Space by Philip K. Dick and Andre Norton
The Beast Master / Star Hunter by Andre Norton
Big Planet by Jack Vance
City Under the Sea by Kenneth Bulmer
The Forgotten Planet (Planets of Adventure) by Murray Leinster
Six Worlds Yonder / The Space Willies by Eric Frank Russell
Sentinels of Space / The Ultimate Invader by Eric Frank Russell and Donald Wollheim
Ring Around the Sun/ Cosmic Manhunt by Clifford D. Simak and L. Sprague de Camp
The Trouble With Tycho/ Bring Back Yesterday by Clifford D. Simak and A. Bertram Chandler
The Last Planet (Star Rangers) by Andre Norton
A Touch of Infinity/ The Man With Nine Lives by Harlan Ellison
Kirkus Looks at Donald A. Wollheim and the Ace Double
Tales of Outer Space/ Adventures in the Far Future edited by Donald A. Wollheim
The Pirates of Zan by Murray Leinster

The first Ace Double I ever saw was Brunner’s “Secret Agent of Terra,” sitting on a bookshelf in my uncle’s bedroom. I think I was 9, and had only just been awakened to science fiction through some of my uncle’s Big Little books, like “Tailspin Tommy and the Island in the Sky.” Years later, when I had a paper route and some disposable income, I started buying my own books, concentrating on the terrific collection of Ace paperbacks at a Readmore in the downtown area I frequented after school. It took me many years to track down the Brunner book, backed with A. Bertram Chandler’s “The Rim of Space,” but I recall that I found the book well worth the wait. Brunner and Chandler became favorites of mine, and I’ve tried to find as much as I could by both. I know I’ve read “I Speak for Earth,” but when I checked my list (I’ve been writing down every book I’ve read since 1968, when I was a senior in high school), I find I’d done so in 1976 – and 22 more books by Brunner have been added to my list since then, so the particulars were hazy until I’d read your summary. All 4 of the Cummings books I’ve read were Ace paperbacks; “Wandl the Invader” is one I haven’t read yet, and your review here leaves me a bit reluctant to take it on, although I did enjoy those other 4 – when I was much younger. What I particularly enjoy, and value, in reading these older titles (and I’d guess I have 75-80% of the D, F, G, H, and M Ace books) is the opportunity to see growth and development (more often than not) as their writers mature. I appreciate Robert Silverberg’s work beginning in the late 1960s, for example, much more after having experienced so much of the stuff he published at Ace. The same goes, to a greater or lesser extent, for Philip K. Dick, Harlan Ellison, Ursula K. Le Guin, Marion Zimmer Bradley, and many others. And of course, so many were graced by the fine cover work of Ed Emshwiller. Perhaps the literary quality of some of those old Ace paperbacks left much to be desired, but I love digging them out and sorting through them every so often. Your reviews of these ‘gems’ have been great fun, John; I’m already looking forward to the next.

I love these early Brunners. I read I Speak for Earth a few years ago and liked it quite a bit, but I think the best of all of them is The Atlantic Abomination. That one is a home run; it’s like a great 50’s SF monster movie, in convenient print form.

> What I particularly enjoy, and value, in reading these older titles (and I’d guess I have 75-80% of the D, F, G, H, and M Ace
> books) is the opportunity to see growth and development (more often than not) as their writers mature.

Thanks for the great recollection, Smitty! And if you’ve read 75-80% of the D, F, G, H, and M Ace Doubles, that makes you just about the most widely read Ace Double fan I’ve ever come across. Bravo!

Oh — and just to be clear, the review above was by Rick Horton, not me this time. Credit given where due!

> I think the best of all of them is The Atlantic Abomination. That one is a home run;
> it’s like a great 50′s SF monster movie, in convenient print form.

Thanks quite an endorsement, Thomas. I haven’t read THE ATLANTIC ABOMINATION yet, but after a rec like that, it’s vaulted very close to the top of my reading list.

My review of THE ATLANTIC ABOMINATION is here: http://www.sff.net/people/richard.horton/aced65.htm

I enjoyed it but not as much as Thomas. If you look at my Ace Double reviews (http://www.sff.net/people/richard.horton/acedpage.htm) you’ll see LOTS of Brunner … my favorite is almost certainly TIMES WITHOUT NUMBER, but I also like ECHO IN THE SKULL, THE SPACE-TIME JUGGLER, the Zarathustra stories like CASTAWAYS’ WORLD … and more!

Believe it or not, I had totally forgot that “Keith Woodcott” was John Brunner. Thanks for the reminder!

I went over to Rick’s site and read the original, John, on your recommendation, so I knew it was his article and not yours. But this is YOUR site, and I truly appreciate it when you give us a chance to read stuff from other blog writers; I’ve added tons of new places to my “Favorites” tab. I just wish I had time to comment on all the great material I read here, but then I wouldn’t have time for reading my books.

[…] fantasy classics on his own blog, Strange at Ecbatan, to great effect for the past few years. We recently highlighted one of his more intriguing choices, the 1961 Ace Double Wandl the Invader/I Speak For […]