What do Dream Houses by Genevieve Valentine, Yesterday’s Kin by Nancy Kress, and The Churn by James S.A. Corey all have in common?

They were all published individually, at prices ranging from $14.95 to $25 for the print editions (excepting The Churn, which isn’t even available in a print edition.) And they’re all included in Paula Guran’s delightful new anthology, The Year’s Best Science Fiction & Fantasy Novellas: 2015 Edition, available now from Prime for just $19.95 in trade paperback.

The Year’s Best Science Fiction & Fantasy Novellas includes nine of the best short novels of the year, from Patrick Rothfuss, K. J. Parker, Mary Rickert, Pasi Ilmari Jääskeläinen, and others. Collected from anthologies, magazines, online sources, limited edition trade releases, and more obscure sources, the book is a terrific way to get introduced to some of the most exciting writing of the year in a single economical volume.

It’s no exaggeration to say that this is the single most anticipated book of the year for me, and I ordered a copy as soon as it was available. 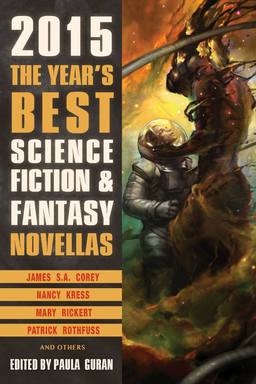 If the name Paula Guran seems familiar, it’s because she’s been extremely busy recently. Some of her recent anthologies we’ve covered include:

Prime Books is one of the finest sources for short fiction in the field, and their books set the standard for high quality SF and fantasy anthologies. Check out our recent survey of their catalog.

The Recent Best: The Fantasy Catalog of Prime Books

The Year’s Best Science Fiction & Fantasy Novellas: 2015 is edited by Paula Guran, and was published by Prime Books on August 7. It is 576 pages, priced at $19.95 in trade paperback, and $6.99 for the digital edition. The cover is by Julie Dillon. See more details at the Prime Books website.