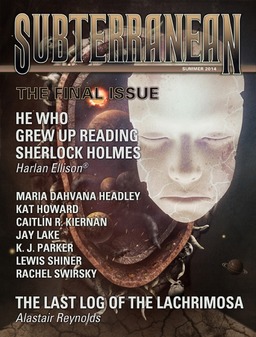 I’ve always been amazed at how publisher William Schafer could produce a top-notch online magazine like Subterranean every quarter, and also run one of the most dynamic and productive small presses in the genre: Subterranean Press. I’ve published a fiction magazine and I know just how much work it is. I’ve never run a small press, much less a mini-publishing empire like Subterranean, but I imagine it must require a lot more work than a mere magazine.

That amazement compounded every quarter as the magazines appeared like clockwork — 31 issues over the last eight years. How does he do it?

Since the magazine was completely free, and yet still paid top rates, it was evidence of something more than just an admirable work ethic: a clear love of publishing, an understanding of the importance of magazines to the genre, and an enduring commitment to short fiction — all in the face of an increasingly indifferent marketplace.

So it is with considerable sadness, but no real surprise, that I note that Schafer has, with no prior fanfare, placed the words THE FINAL ISSUE on the Summer 2014 issue of Subterranean Magazine. I’m deeply disappointed that this is the last edition of one of the finest online publications the field has ever seen. But in my heart, I knew this had to come eventually and it doesn’t at all diminish what the magazine accomplished. Mr. Schafer, I salute your dedication and your amazing accomplishment.

“Pushing the Sky Away (Death of a Blasphemer)” by Caitlín R. Kiernan
“The Last Log of the Lachrimosa” by Alastair Reynolds
“The Very Fabric” by Kat Howard
“The Things We Do For Love” by K. J. Parker
“West to East” by Jay Lake
“What There Was to See” by Maria Dahvana Headley
“Grand Jeté (The Great Leap)” by Rachel Swirsky
“The Black Sun ” by Lewis Shiner
“He Who Grew Up Reading Sherlock Holmes” by Harlan Ellison

Subterranean is edited by William Schafer and published quarterly. The Summer 2014 issue is completely free and available here; see their complete back issue catalog here. We last covered Subterranean magazine with their previous issue, Spring 2014, and a Vintage Treasures piece on their second print issue here.

Hey John: Off topic, but if you haven’t seen it, Amazon has a ton of L.E. Modesitt, Jr. fantasy novels on sale for $2.99 each for the Kindle version, today only. It’s their Gold Box Bonus Deal of the Day (the regular Gold Box Deal is for back-to-school stuff).

And on topic: Sad to hear about the end of Subterranean, though I rarely had the time to read it (I don’t even really keep up with the dead tree mags I subscribe to; as we’ve discussed before, reading will be my retirement project 😉 ).

Very sad news. My grief could be somewhat assuaged if all of the issues were made available in some standard eBook format …

[…] list doesn’t include defunct magazines, like the much-missed Subterranean and Electric Velocipede, or John Joseph Adams’s excellent Fantasy, which was absorbed into […]