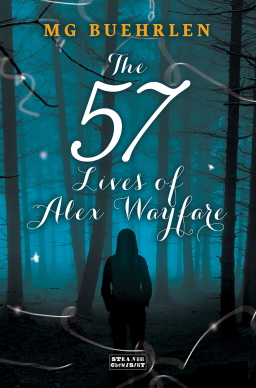 High-school junior Alex Wayfare has had visions of the past — usually triggered by a moment of déjà-vu — ever since she was a little girl. These visions feel real to Alex and they cover real historical events (such as Jamestown or the World’s Fair). When she gets hurt during these visions, the wounds (for example, a cat scratch) appear on her body. She wonders if she might be schizophrenic.

After yet another vision — this one of 1920’s Chicago — Alex finds a note from a man named Porter. When Alex meets with him, Porter tells her the visions are real and that Alex is a Descender — a person who can travel back in time through a portal to the afterlife called Limbo.

Not only that, she’s a special sort of Descender called a Transcender. This means that when she travels back in time, she doesn’t become a different person, she drops into one of her own past lives. Porter also tells her that the man who created this technology is after her, and so she is in mortal danger.

This book blends time-travel and reincarnation to give readers a unique twist on each trope. Based on the premise alone, I had high hopes for this book. I wanted to like it. But… well, the novel has good points and bad, and unfortunately the bad outweighed the good for me.

It’s clear MG Buehrlen can write well. The prose flows, and I didn’t stumble over a single sentence or wonder what the author meant to say. The premise is inventive and unique, and the plot is intricate. Wayfare is not-quite-science-fiction, not-quite-fantasy, and not-quite-thriller, and the author does a good job of blending these genres into a coherent narrative.

However, this intricacy is part of the problem. Buehrlen spends a lot of time on the mechanics of Alex’s powers, the rules of Descending, and the evil lurking behind the curtain. The author needs to convey a lot of information to the reader, and she does so through long swaths of info-dumping exposition.

Info-dumps in and of themselves aren’t necessarily bad, but they can — and in Wayfare’s case, do — slow down the plot and take away all of the tension. By the middle of the novel, I had a decent understanding of how the world worked, but didn’t have a reason to care. I didn’t feel afraid for Alex, even though The Big Bad Evil Guy is after her. And while she does encounter violence in the past, she’s never in too much danger.

While I love the genre-blending aspects of this novel, it wasn’t enough of any one of them for me. The science of the time travel isn’t explained (as much as time travel can ever be “explained”), Alex doesn’t experience real consequences from her ability (like most magical people do in fantasy), and the pacing is too slow to really be called a thriller.

Perhaps if I had liked Alex a bit more, I would be more forgiving of the novel as a whole. However, I had a hard time sympathizing with Alex in the beginning. She’s a social pariah and basically flunking out of school because of her visions, which I had a hard time believing. Would a life filled with unexplained visions have an effect on a person? Absolutely. But to me it felt like Alex blamed everything that was wrong with her life to this one aspect of her life she can’t control. Instead of taking action sooner or somehow making the visions work to her advantage, she is content to play the victim, which I couldn’t get behind.

In spite of my somewhat negative view of this novel, I think MG Buehrlen has a lot of talent. I’ll be interested to see how she evolves as a storyteller.