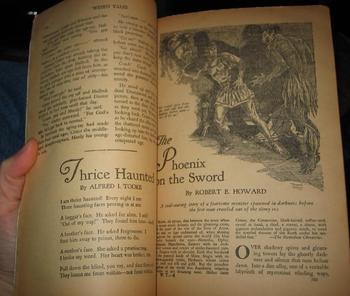 Over at Howard Andrew Jones’ blog, Bill Ward and Howard Andrew Jones continue their re-read of the first Del Rey Conan volume, The Coming of Conan, with the very first Conan story, “The Phoenix on the Sword,” originally published in the December 1932 issue of Weird Tales magazine. Here’s Howard:

Look at the story’s opening quote. That’s practically the gold standard of quotes from imaginary historical sources. That fabulous “Know, O Prince” and all that follows has been imitated but rarely, if ever, equalled. This, fellow fantasy fans, is the way it’s done. Admittedly, there are a few phrases in the middle of the paragraph that are less inspired. I’m looking at “Zingara with its chivalry, Koth that bordered on the pastoral lands of Shem.” Most of the rest of the quote paints lovely word pictures, but those phrases don’t remotely approach the poetic majesty of the rest — what does Zingara look like? What does Koth look like? But the rest is lovely, and the quality picks right back up with “dreaming west” and powers on to that fantastic finish, “Hither came Conan…”

Look at the opening line of the story: “Over shadowy spires and gleaming towers lay the ghostly darkness and silence that runs before dawn.” Damn. Why doesn’t anyone write like that any more? Howard sets the scene with sharp, sensory laden description. He’s a film director guiding the camera with a fantastic establishing shot.

Their first post on this topic discussed Howard’s “The Hyborian Age.” Read the complete exchange here.

Shared a comment regarding a post I did in 2007 discussing this story because Jones’ points seemed similar.

Here’s the link to ‘The Frost Giant’s Daughter’ post.

And here is The God in the Bowl.

And the best one so far, for ‘The Tower of the Elephant.’

[…] previous posts on this topic have included discussions of Howard’s “The Hyborian Age,” “The Phoenix on the Sword,” and “The Tower of the […]