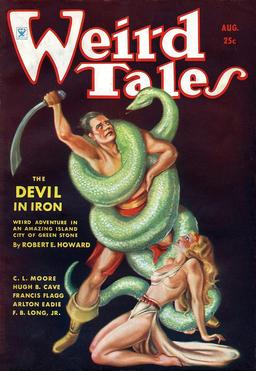 Howard Andrew Jones and Bill Ward wrap up their re-read of The Coming of Conan by Robert E. Howard, the first of the three Del Rey volumes, with “The Devil in Iron,” the last story in the collection, first published in the August 1934 issue of Weird Tales. Here’s Bill:

After an opening in which the supernatural juggernaut of the title is teased, we are treated to an outline of the plot to catch Conan on the very same island where we’ve just seen an ancient evil reborn. “The Devil in Iron” is heavily reminiscent of “Iron Shadows in the Moon” and “Xuthal of the Dusk,” but most especially the former… The story is a fitting capstone to this collection of the first Conan tales, being one more of the ‘formula’ stories, but also one of the best of those…

Overall “The Devil In Iron” feels in some ways like the remix of a favorite song, it’s old familiar territory that’s well worth traipsing through again, and a welcome return to form after last week’s “The Vale of Lost Women.” From this point on the stories get much longer, the plots more involved, and REH’s inspirations shift in new directions. It’s a fitting place to end the first of Del Rey’s Conan collections, The Coming of Conan.

Next up, Bill and Howard dive into the second Del Rey Robert E. Howard collection, The Bloody Crown of Conan, starting with the classic “The People of the Black Circle.” Stay tuned.