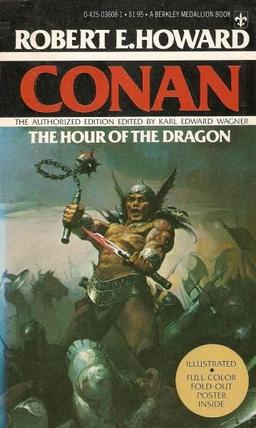 Howard Andrew Jones and Bill Ward continue their re-read of The Bloody Crown of Conan by Robert E. Howard, the second of three omnibus volumes collecting the complete tales of Conan, with the full-fledged novel The Hour of the Dragon. It was originally published in five parts in Weird Tales, from December 1935 to April 1936.

Howard: Robert E. Howard was at the top of his game when he wrote it. For decades there was nothing with which to compare this novel on an apple to apple basis because it was so far ahead of what anyone else had done…

Bill: The novel… was the result of a solicitation from a British publisher for a full-length pulp adventure from REH… After an abortive stab at the planetary romance novel Almuric, left unfinished by REH and possibly later completed by his agent, Otis Aldebert Kline, REH turned again to the Cimmerian and his Hyborian landscapes. And it is to King Conan, whom we have not seen since “The Scarlet Citadel,” that REH returns to for his epic… King Conan is betrayed and captured by conspirators aided by a powerful wizard, and his throne usurped by an Aquilonian nobleman… the quick set-up of Conan’s betrayal and capture on the battlefield in “Citadel” becomes the far more memorable and exciting chapter in Dragon that sees Conan, about to lead his forces in battle, paralyzed by sorcery and his place on the field taken by another…

Next up, Bill and Howard dive into the third Rel Rey Conan collection, The Conquering Sword of Conan. Stay tuned.

Bill and Howard tackle the novel in two parts: Part One is here, and Part Two is here.

Hour of the Dragon was the first Conan story I read. Had heard of Conan and I suppose picked up snippets in popular culture but actually reading this story blew me away.

The blurb is so true, this novel really upped the game. Decades later when I read it, it upped my game as well, opening my eyes to just how powerful a good sword & sorcery could be.

There aren’t many books that can lay claim to having shaped an entire genre. The first Conan novel is definitely one of them.