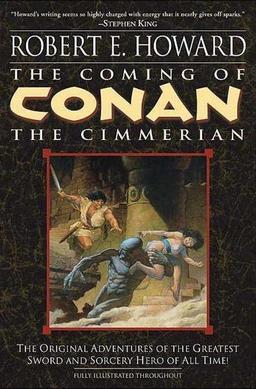 Bill Ward and Howard Andrew Jones have wrapped up their detailed and highly entertaining look at Fritz Leiber’s famous Lankhmar stories over at Howard Andrew Jones’ website. But without pausing for breath, they’ve leaped into a re-read of Robert E. Howard’s classic tales of Conan, starting with the Del Rey edition of The Coming of Conan the Cimmerian, and Howard’s essay on the world Conan adventured in, “The Hyborian Age.” Here’s Bill:

“The Hyborian Age” isn’t the place to start if you are new to Conan, in fact I’d say it’s really only interesting if you are already familiar with Conan’s world, as well as the enthusiasms of Conan’s creator. REH himself didn’t start with “The Hyborian Age,” either, he started with the character of Conan, only settling down to iron out his “world bible” once he had three Conan stories under his belt and realized he wanted to write many more… It’s the history of a lost age before the rise of the civilizations we are familiar with, but it’s also a way of getting around history. REH wrote fast and he wrote for publication and, though he loved history and writing historical fiction, he felt it took too much time to get the research just right. Enter the secondary world of his own slice of pre-history, a way of not only having a world he didn’t have to exhaustively research, but also a vehicle for bringing together the character and flavor of many different cultures and eras that would allow Conan to adventure in the equivalent of everything from the Ancient Near East to Medieval France. That may not be completely clear just from reading “The Hyborian Age,” but it is clear from the stories themselves, as well as by glancing at the two maps REH used when planning his world — his Hyborian Kingdoms superimposed over a map of Europe, North Africa, and the Near East is probably even more eloquent than his essay…

I think one thing REH should be credited with is how he expanded the concept of “Sword and Sorcery”. Something we take for granted was done by literary necessity. But in its own way it’s as profound as Gene Roddenbury’s “Transporter” on Star Trek and the “Lightsaber / Space Opera” mass acceptance Star Wars brought.

REH liked “Historical Fiction” and spent much of his fantasy life in it – but guess what, it was a period where little was really known and more being uncovered almost daily. In addition REH – literally – had read “Every book in the library” albeit a small one – and no internet had not 1/1000th the amount of info we take for granted with the internet.

So he made up a quasi-historical era that was in an unknown time – after the deluge but before modern history – so he could include enough believable historical elements and not make up something 100% and try to ‘sell’ it but nto worry about being countered… Again SW&SC / Scifi is held to a higher standard, look at all the “Piracy in the Age of Scurvy” (Simpsons joke ref) with Fabio hugging some lady in women’s romance – surprised the “Captured Countess” doesn’t update her Facebook page about her Pirate lover…

His use of “An age undreamed of” made it easier for writers in both genres to sell “Secondary Worlds” to readers. Just one man’s opinion.

I got to go to the REH museum this summer and saw the actual room where REH wrote all those Conan stories. I walked the grounds that he walked on.

I also got to see his book collection. It was sparse and filled with books from the time period. I also saw one of Howard’s high school senior essays with the English teacher’s red pen comments. It was so cool.

I think I’ll jump over to the other Howard’s blog and jump in on the reading. I wonder if smitty59 is there.

I’ll be reading along for this one. I should have started the fafhrd and the grey mouser stories when they read through those.

Are they just doing this book or are they going through all of the series?

My understanding is they’re doing the entire Del Rey series.

[…] previous posts on this topic have included discussions of Howard’s “The Hyborian Age,” “The Phoenix on the Sword,” and “The Tower of the Elephant.” Read the […]