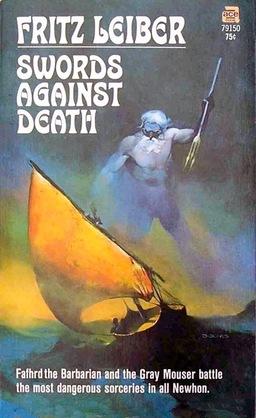 I’ve been enjoying the re-read of Fritz Leiber’s famous Lankhmar stories over at Howard Andrew Jones’ website. Howard and Bill Ward have taken a break from their entertaining examination of Lord Dunsany, and have turned their keen eye towards one of the most famous sword and sorcery series of all time, Fritz Leiber’s Fafhrd and the Gray Mouser books. They open the series with an overview of the second volume, Swords Against Death, a collection of short stories. Here’s Howard.

Once I got past the short, storyless opening (“The Circle Curse”) I was engrossed. Every short story was approximately the same length, and a few were tangentially connected. It was a little like episodic television.

More importantly, it was exciting, fast-paced, brimming with magic and sword-play and horror and mystery — and beautiful women, a subject that was becoming increasingly interesting to teenaged Howard. I loved Swords Against Death so much that I read it at least six times in the next few years (oh, to have so much spare time and energy).

Swords Against Death was not only one of the first fantasy books I read, it was my introduction to true sword-and-sorcery. These days the line between sword-and-sorcery is a lot more blurred than it was in the mid ’70s. Back then you pretty much had high fantasy, or sword-and-sorcery, and I definitely preferred the latter for the grit and the kind of protagonists, not to mention the pacing.

Swords Against Death was published in July 1970 by Ace Books. It is 251 pages, originally priced at $0.75. The gorgeous cover is by the one-and-only Jeff Jones.

Read the complete overview here, and part one (a look at “The Circle Curse”) here.

I bought tho very paperback back when it first came out, and was enthralled with Fafhrd and Gray Mouser. These are some of my very favorite fantasy stories. I wish they still wrote them this way.

You’re not alone, R.K. These tales first appeared in magazines over five decades ago, and they are still the gold standard for adventure fantasy for many modern readers.

R.K. – This is as close to Fafhrd & the Mouser as anybody has yet come. Or so I think..

Thanks Bob! I bought Kemp’s A Discourse in Steel, another tale of Egil and Nix, a few years back, because I heard something similar. I haven’t had the chance to check it out yet, but I think I shall.