Last week I talked about two of my favorite anthologies by one of the most acclaimed editors in the field: The Good Old Stuff (1998) and The Good New Stuff (1999) (collected into one massive 982-page volume as The Good Stuff by the Science Fiction Book Club in 1999), both edited by Gardner Dozois. Those books collected some of the best adventure SF from the last century, alongside Dozois’ detailed and affectionate commentary on each author. The result was the equivalent of a Master’s level course in Adventure SF of the 20th Century, and its most proficient writers.

A year later, Dozois did the same thing with another pair of anthologies, this time focused on two similarly fascinating branches of science fiction: tales of deep space exploration, and tales of the far future. Like the first two volumes, they were both released in trade paperback from St. Martin’s/Griffin, and they are both excellent:

Both had covers by famous SF artist Chesley Bonestell. Like the first volumes, they include Dozois’ lengthy and highly informative intros to each story. These volumes perfectly compliment the first two, forming the basis for a solid library of modern science fiction.

Also like the other volumes, they collect a delightful mix of both criminally overlooked and classic short fiction, including Arthur C. Clarke’s famous “Sentinel,” the story that inspired 2001, and multiple Hugo Award-winners, such as Robert Silverberg’s famed novella “Nightwings” and Poul Anderson’s “The Longest Voyage,” and Clarke’s Nebula Award-winning “A Meeting With Medusa.”

In May 2000 the Science Fiction Book Club released a single-volume, 916-page hardcover omnibus collection of both books with a striking cover by John Berkey, titled Exploring the Horizons. 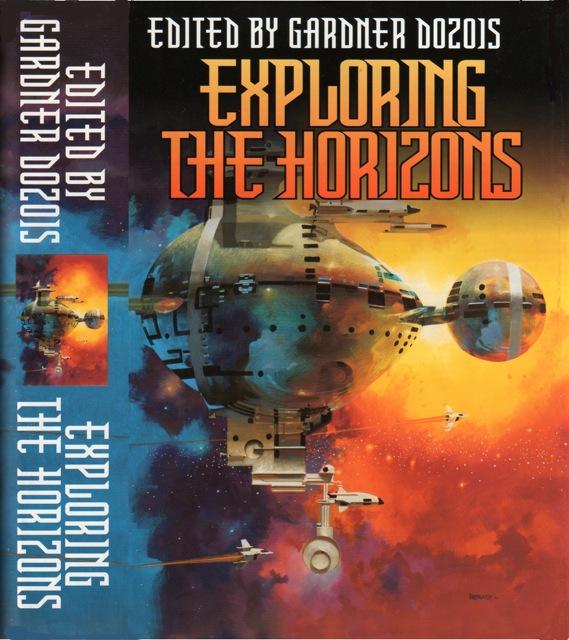 The hardcover edition is still available through places like Amazon.com, and is a real bargain.

Here’s the TOC for Explorers:

And for The Furthest Horizon:

Both volumes are hugely enjoyable reads.

Perhaps the most disappointing aspect of both books is that they weren’t more commercially successful. When I dropped a Facebook note to Gardner on the first entry in the series, on The Good Stuff volumes, his response was:

Few people saw any of those books, as far as I can tell.

Well, their loss is your gain. Both volumes are readily available online, both new and used, at very reasonable prices. And digital versions are available from the publisher for $7.99 each.

If you enjoyed these books, check out Dozois’ other anthologies in the same loose series:

And our previous coverage of some of the other fine anthologies edited by Gardner Dozois:

Next up: the last two anthologies in this series, Worldmakers: SF Adventures in Terraforming (2001) and Supermen (2002).

I ordered EXPLORING THE HORIZONS on AMAZON. I love the John Berkey cover! Thanks for the recommendation!

Glad to point you towards some fine reading, Kelly. I hope you’ll drop by again when you’ve received the book, and let us know what you think!