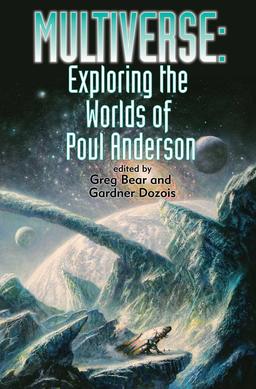 Poul Anderson was one of the greats of 20th Century science fiction and fantasy. He was astoundingly prolific, writing over 70 novels and numerous short stories before his death in 2001. He won virtually every award the field has to offer, including seven Hugos and three Nebulas, and the ambitious project to collect his short fiction, The Collected Short Works of Poul Anderson from NESFA Press, stands at six thick volumes and counting.

For Poul Anderson fans, and for those being introduced to him for the first time, this is a truly invaluable anthology featuring some of the brightest names in the field. Here’s the complete table of contents.

Introduction: My Friend Poul, by Greg Bear
“Outmoded Things” by Nancy Kress
“The Man Who Came Late” by Harry Turtledove
“A Slip in Time” by S. M. Stirling
Living and Working with Poul Anderson, by Karen Anderson

“Dancing on the Edge of the Dark” by C. J. Cherryh
“The Lingering Joy” by Stephen Baxter
“Operation Xibalba” by Eric Flint
“Tales Told” by Astrid Anderson Bear
“The Fey of Cloudmoor” by Terry Brooks
“Christmas in Gondwanaland” by Robert Silverberg
“Latecomers” by David Brin
An Appreciation of Poul Anderson, by Jerry Pournelle
“A Candle” by Raymond E. Feist
“The Far End” by Larry Niven
“Bloodpride” by Gregory Benford
“Three Lilies and Three Leopards (And a Participation Ribbon in Science)” by Tad Williams

Poul Anderson was one of the seminal figures of 20th century science fiction. Named a Grand Master by the SFWA in 1997, he produced an enormous body of stand-alone novels (Brain Wave, Tau Zero) and series fiction (Time Patrol, the Dominic Flandry books) and was equally at home in the fields of heroic fantasy and hard SF. He was a meticulous craftsman and a gifted storyteller, and the impact of his finest work continues, undiminished, to this day.

Here is a rousing, all-original anthology that stands both as a significant achievement in its own right and a heartfelt tribute to a remarkable writerand equally remarkable man. A nicely balanced mixture of fiction and reminiscence, this volume contains thirteen stories and novellas by some of today’s finest writers, along with moving reflections by, among others, Anderson’s wife, Karen, his daughter, Astrid Anderson Bear, and his son-in-law, novelist and co-editor Greg Bear. (Bear’s introduction, “My Friend Poul,” is particularly illuminating and insightful.)

The fictional contributions comprise a kaleidoscopic array of imaginative responses to Anderson’s many and varied fictional worlds. A few of the highlights include Nancy Kress’s “Outmoded Things” and Terry Brooks’ “The Fey of Cloudmoor,” stories inspired by the Hugo Award-winning “The Queen of Air and Darkness”; a pair of truly wonderful Time Patrol stories (“A Slip in Time” by S. M. Stirling and “Christmas in Gondwanaland” by Robert Silverberg); Raymond E. Feist’s Dominic Flandry adventure, “A Candle”; and a pair of very different homages to the classic fantasy novel, Three Hearts and Three Lions: “The Man Who Came Late” by Harry Turtledove and “Three Lilies and Three Leopards (And a Participation Ribbon in Science)” by Tad Williams. These stories, together with singular contributions by such significant figures as Larry Niven, Gregory Benford, and Eric Flint, add up to a memorable, highly personal anthology that lives up to the standards set by the late — and indisputably great — Poul Anderson.

Multiverse: Exploring the Worlds of Poul Anderson was published by Baen on June 2, 2015. It is 400 pages, priced at $15 in trade paperback. The cover is by Bob Eggleton (see the gorgeous wrap-around original here).