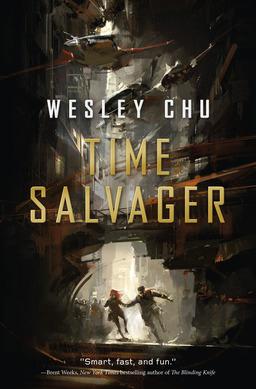 I first met Wesley Chu at the 2013 launch party for Mary Robinette Kowal’s Without a Summer here in Chicago. His first novel, The Lives of Tao, was about to be released by Angry Robot, and it was a thrill to meet another local author just beginning to get his career underway.

Well, that didn’t last long. Fast forward two years, and Wesley Chu is one of the hottest writers in the business. His second novel, The Deaths of Tao, appeared in October 2013, and in April he received a nomination for the John W. Campbell Award for Best New Writer. Before most of us could even say “Congratulations!” however, Wesley announced that his third and fourth novels, The Rebirths of Tao and Time Salvager, would both be released this year. And on June 3, Wesley posted a brief announcement on Facebook pointing to this post at Tor.com, which began:

Ahead of its publication in July, Wesley Chu’s Time Salvager has already been optioned for a movie! According to Publishers Weekly, Paramount Pictures acquired the rights for a feature film franchise, with Michael Bay attached to direct and Chu set to executive produce.

Four novels, a major award nomination, a movie deal, and more. If you haven’t already heard of Wesley Chu, I suggest that now is the time to sit up and take notice.

Time Salvager is a great place to start. It’s a fast-paced time travel adventure featuring what Wesley describes as “an energy stealing time traveler with addiction issues.” After the announcement, Tor quickly shipped a small number of advance copies to the Nebula weekend here in Chicago in early June, and I was lucky enough to grab one. It opens with a tense scene on the bridge of a starship on the verge of destruction, and things accelerate quickly from there.

Convicted criminal James Griffin-Mars is no one’s hero. In his time, Earth is a toxic, abandoned world and humans have fled into the outer solar system to survive, eking out a fragile, doomed existence among the other planets and their moons. Those responsible for delaying humanity’s demise believe time travel holds the key, and they have identified James, troubled though he is, as one of a select and expendable few ideally suited for the most dangerous job in history.

James is a chronman, undertaking missions into Earth’s past to recover resources and treasure without altering the timeline. The laws governing use of time travel are absolute; break any one of them and, one way or another, your life is over. Most chronmen never reach old age; the stress of each jump through time, compounded by the risk to themselves and to the future, means that many chronmen rapidly reach their breaking point, and James Griffin-Mars is nearing his.

On a final mission that is to secure his retirement, James meets Elise Kim, an intriguing scientist from a previous century, who is fated to die during the destruction of an oceanic rig. Against his training and his common sense, and in violation of the chronmen’s highest law, James brings Elise back to the future with him, saving her life, but turning them both into fugitives. Remaining free means losing themselves in the wild and poisonous wastes of Earth, somehow finding allies, and perhaps discovering what hope may yet remain for humanity’s home world.

See all of our featured coverage on the best in upcoming fantasy here.