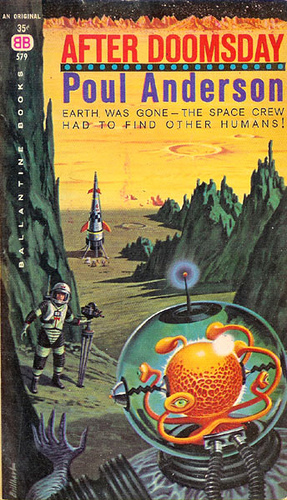 I’m putting away all the paperbacks that arrived with my two Philip K. Dick lots, and I stumbled across the fabulous artifact at right.

After Doomsday was published by Ballantine Books in 1962, two years before I was born. It was originally serialized in Galaxy magazine (as The Day after Doomsday) between December 1961 and February 1962.

What truly makes it fabulous isn’t just the great cover art by Ralph Brillhart, with a bug-eyed alien stumbling on some guy surveying a road during his evening constitutional. No no no. It’s this wonderful description on the back cover:

CARL DONNAN was a space engineer — a man of action who did his job well and didn’t think much beyond that — but now his home planet was destroyed and he found himself with two burning ambitions:

– FIND the beings who blew up the Earth.

– SEARCH the galaxies until they located another Starship with female humans aboard.

BOTH PROJECTS were vital to the survival of the human race — and both were monumental tasks.

THIS was the time when the galaxies discovered how grim and purposeful a handful of homo sapiens could be.

A starship with “female humans” aboard. I think the first task for this guy Carl should be to look up “female humans,” find out they’re called “women,” and then put an ad on Craig’s List. The survival of the species is on your shoulders, dude. Time to put down that survey equipment and pick up a clean shirt. And maybe some mouthwash.

There’s a lengthy plot synopsis of After Doomsday here. Don’t expect it to be as entertaining as that back cover copy, though.

I recently re-read this one. The story’s actually quite good.

Is it as good as that awesome cover?

What if female humans were the aliens that blew up the Earth? I asked my wife, a female human, about it and she laughed. LAUGHED.

I’m older than you, John, and have spent untold hours crawling through used bookstores pouring over old paperbacks.
I have never seen that book before.

The cover is sublime. Doesn’t look like any Ballantine I’ve ever seen.
How do you find this stuff? Did you ever wonder if your unholy passion for pulp sf was somehow causing fresh examples of it to spontaneously generate?
Just asking.

> What if female humans were the aliens that blew up the Earth? I asked my wife, a female human,
> about it and she laughed. LAUGHED.

Wow. I hadn’t thought of that.

Female humans are mysterious. What if this guy finally finds a spaceship filled with female humans, and they said “Get lost, loser.”

Happens to me all the time. My teenage daughter says it to me constantly, and she is also a female human.

> The cover is sublime. Doesn’t look like any Ballantine I’ve ever seen.

Isn’t it? I picture that alien getting home after his walk and saying to his female alien, “Honey, I saw the weirdest thing by your rose bushes.”

And the back cover text fits it perfectly:

I mean, look at him. That guy just wants to be building roads. The heck with female humans.

> How do you find this stuff? Did you ever wonder if your unholy passion for
> pulp sf was somehow causing fresh examples of it to spontaneously generate? Just asking.

If it did, I’m sure in-depth knowledge of it would spontaneously generate in the brain of John C. Hocking.

“I recently re-read this one. The story’s actually quite good.”

I can’t offhandedly recall much that Poul Anderson wrote that wasn’t at least quite good.

How could any mere story match that cover?

(I reviewed it here.)