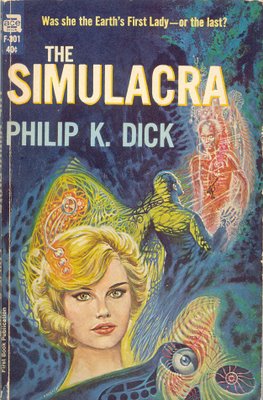 Almost exactly a year ago this weekend I was in downtown Chicago, selling books and Black Gate magazines at the Printer’s Row book fair. It was hot and I got sunstroke, and I had to cancel dinner plans with the charming and beautiful Patty Templeton. Stupid, stupid sunstroke.

But I learned something fascinating. Well, two fascinating things. The second was that no one wants print fiction magazines anymore. I can’t tell you how many people picked up copies of Black Gate 15, dazzled by the look and heft of the thing, asking “What is this?” The moment they learned it was a magazine, they put it down and wandered over to the booth selling travel books.

But the first fascinating thing I learned is that vintage Philip K. Dick paperbacks sell at almost any price.

I learned this mostly by accident. I had a few hundred recently-acquired vintage paperbacks bagged up, but didn’t have time to price them. The night before the show they were spread out in stacks on our bed, all with cheerful blank price stickers, and Alice was threatening to sleep on the couch.

So I just priced them at random. Most I listed at 2 – 3 bucks, occasionally as high as 10. When I got to the more valuable stuff, like the Philip K. Dick , I wrote “$35” on most of ’em, even the stuff I’d only paid a buck or two for. I figured I’d do my homework and re-price everything that didn’t sell later.

Instead, I sold all the Philip K. Dick in less than two days.

Obviously, this was an unusual test case. For one thing, this wasn’t an SF convention and my buyers generally weren’t science fiction readers. They were book collectors who knew just enough about Philip K. Dick to know he’s in demand. There was a lot of impulse buying, and hardened rare book collectors are maybe less reluctant to fork over $30 – $40 on impulse than a typical SF reader.

Still, it was very educational. Dick was one of the only authors browsing customers frequently asked about (the others were Samuel R. Delaney and Ursula K. LeGuin), and if I could put a book in their hands, it was a short step to a sale. It didn’t hurt that many of his paperbacks look terrific, like the Emsh cover on the 1964 Ace edition of The Simulacra, above.

I don’t sell much anymore, but I do have two tables reserved for Chicon 7, the World Science Fiction convention coming up this Labor Day here in Chicago. In preparation, I’ve been accumulating as many Philip K. Dick titles — and other vintage SF paperbacks — as I can find. eBay is one fertile hunting ground, especially if you’re willing to buy larger lots. Last week I purchased lots containing The Simulacra and Dr. Bloodmoney (plus 10 other mixed SF paperbacks) for $6.05 each. I’m pretty sure I can re-sell the Dick titles alone for a lot more than that.

Just how much more remains to be seen. I’ll let you know after Chicon.

[…] putting away all the paperbacks that arrived with my two Philip K. Dick lots, and I stumbled across the fabulous artifact at […]

I’m studying Phillip K. Dick because I think he is the template of the sucessful writers of the future. He is a prolific writer who has had success in multiple genres. I think that is significant because it broadens your reader base. Maybe the thriller mystery readers will take a chance on his sci-fi stuff etc. I also think that several of the books that made it to the big screen were ones that were both good stories and could be cheaply done. I am saddened to see John Carter of Mars tank at the box office. How many readers will that bring? I’m a teacher and I discovered that Phillip K. Dick has several of his books made into educational lessons. Think about how many readers THAT will harvest. Phillip K. Dick, I’ve discovered, or those that handle his work, are the work of business genius.

I hate to see magazines fall flat. They are often the launching pads for many authors. Still, I think the market is in fluctuation and magazines still have a lot to offer. One thing that is missing from magazines is a rabid fanbase. One thing that is weird is that Maxim and Men’s Health are booming and I see men read them all the time. Sure the Maxim cover girls might help sell them but the circulation of the heaviweights of old are still trying to appeal to the audience of old. I think a lot of your potential readers are playing WoW, Starcraft, etc. I hope I don’t come off as an insulting know it all. Honestly, I’m glad you guys are in business and I hope you are wildly successful. I hope y’all are like me asking how Phillip K. Dick is doing it.

I suspect it was your ‘are you a fan of Dick?’ line that brought in the sales.

But I’ve noticed the same thing on ebay — I’ve given up even trying to get the old paperbacks any more.

> He is a prolific writer who has had success in multiple genres.

Um, what? I wasn’t aware Dick wrote anything other than science fiction.

> One thing that is missing from magazines is a rabid fanbase.

Very true. Pulps magazines used to have a rapid fanbase. They’d win fans as teenagers, and keep them for life. I wish we’d been able to reach more younger fans with Black Gate. I tried hard — by keeping the content family friendly, and suitable for ages 12 and up — but that wasn’t nearly enough.

> I suspect it was your ‘are you a fan of Dick?’ line that brought in the sales.

Ha!! You know, I totally forgot about that.

For those who weren’t working the Black Gate booth at Dragon*Con, Bill is referring to an infamous incident in 2010 when an attractive young woman innocently picked up a Philip K. Dick novel at the Black Gate booth. Moving in with my razor-sharp sales skills, I casually asked, “Are you a fan of Dick?”

She dropped the book and left the booth as quickly as she could, leaving my co-workers howling. For the rest of the convention, “Are you a fan of dick?” was repeated back to me about 20 times an hour.

Apparently, it is neither an effective sales opener nor a good pick-up line.

> But I’ve noticed the same thing on ebay — I’ve given up even trying to get the old paperbacks any more.

I’m still able to buy lots of Dick paperbacks in good shape, provided I’m willing to pay about 5 bucks a book. But assuming I can sell them for closer to 20, that’s still still a good deal.

We’ll see if that assumption holds true at Worldcon.

Okay, genre isn’t the right word. What I meant is that he writes across the spectrum of science fiction..ie..thriller, hard sci fi, cyberpunk, mystery, ect. He tends to walk the line between two genres in my view where other sci fi writers tend to specialize.

Are you a fan of Dick? Wahahaha!

I remember watching Gene Simmons appear before Congress as a music industry expert. Congress was going to make it a law to label records (a long long time ago they had records and not CDs) to warn the public of questionable content. Some Congressman asked Simmons what he thought of that in a kind of sneery voice to intimidate Simmons. Simmons smiled back at him and said, “I wish you would put a label on the record. In fact, I might just do that on my next album anyway. Warning sexually explicit material—I’ll sell millions.” Just slap one of those stickers on the cover and who knows what will happen. Just kiddin’.

> Okay, genre isn’t the right word. What I meant is that he writes across the spectrum
> of science fiction..ie..thriller, hard sci fi, cyberpunk, mystery, ect.

PKD as a model for the author of the future started me thinking about his creative process and personal life first, and output only later. Oh, so that’s what I’m doing wrong, I told myself. I’m falling down on so many parts of the job–the substance abuse, the borrowing money from friends and business associates and never paying them back, the uninvited couch surfing, the five marriages. No wonder I’m still an unknown.

Sarah, I’m not sure what to make of that comment but I want to clarify what I meant of author of the future. Whoever is marketing PKD’s estate has it on the ball. They have several movies, educational books, and PKD’s name is still growing in popularity. I wouldn’t be surprised if they open a PKD world and allow other authors to write in his playground. All of these are brilliant marketing strategies and moneymakers. Now if you thought I meant to model PKD’s life, I cannot be responsible for that. Your comment was an excellent flaming. I’m glad to see that you are willing to open your mind to other career enhancing strategies but I can’t be held responsible for that.

Wild Ape, I apologize. On rereading, I can see how the tone I intended did not come across and the tone you heard would fit with the words.

PKD’s work is brilliant, and it is being brilliantly cared for and developed by his estate. An examination of why and how those brilliances work would be extremely useful.

[…] Philip K. Dick taught me a lot about book collecting — and not just how to phrase my questions more delicately. His earliest paperbacks — especially his Ace Doubles — command extraordinary prices in the collector’s market, as I wrote about after my experience selling Dick paperbacks at the Printer’s Row book fair in 2011. (You can read about it in my article Selling Philp K. Dick.) […]

[…] my days as a bookseller at places like the Chicago Printer’s Row book fair (in my article “Selling Philip K. Dick“), Delaney is one of a handful of classic SF authors for whom there is still a constant […]