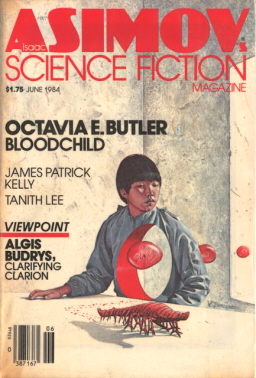 I’m still putting away boxes of stuff that’s piled up in my library. Today it’s a collection of science fiction magazines I purchased from Craig Sandford, a guy I met on eBay, a few months ago. Craig kept his magazines in great condition. I had most of them already (don’t tell Alice), but Craig offered me a sweet deal. And realistically, I won’t be content until my basement is so stuffed with games and magazines it’s impossible to move. So this is progress.

As I slid each magazine into a protective plastic bag, daydreaming of the future age when SF digests from the 1980s are near-priceless cultural artifacts (not far off now), I came across the June 1984 issue of Isaac Asimov’s Science Fiction Magazine, with Wayne Barlowe’s brilliant and chilling cover for Octavia E. Butler’s story “Bloodchild.”

“Bloodchild” is a stunning work of short fiction. It won both the Hugo and Nebula awards for best novelette, and was the title story of her slim 1995 collection, Bloodchild and Other Stories. Although I had magazines and boxes scattered all over the floor, I curled up in my big green chair to re-read it.

Butler has described “Bloodchild” as a tale of male pregnancy, which is apt even if it isn’t very descriptive. The young Gan lives with his family on a Preserve on an alien world, where humans are protected from the dominant species — the huge, powerful and intelligent insect-like Tlic, who lay their eggs in humans and nearly wiped them out when the first human settlers arrived. Gan’s father gave birth to three alien broods before he died, including the noble T’Gatoi, a female Tlic who’s become one of humanity’s strongest protectors. But now it’s time for T’Gatoi to lay her own eggs, and she has chosen Gan as her mate. When Gan witnesses the violent and bloody birth of a clutch of grubs, he realizes for the first time exactly what he’s being groomed for. He’s unsure he can go through with it, but to refuse now will have dangerous ramifications for his family. “I knew birth was bloody and painful, no matter what,” he reasons. And how does T’Gatoi see her mate? Is he just a pet? Or is it possible she feels… something like love?

Barlowe captures the innocence and horror of “Bloochild” perfectly in his cover, which depicts a new-born alien grub leaving a trail of blood as it emerges from the adolescent boy Gan, who watches with a calculating look. Click on the image above for a bigger version.

This is why I love science fiction and fantasy magazines. They’re not just slender collections of stories. They are a refined meeting of fact, art, and fiction, and when that meeting turns into a wild night of necking in the back seat, as it does here, it’s worth telling your friends about. You’re my friends, so I’m telling you. (And as we’ve discussed, kindly don’t mention this to Alice).

I don’t know any place where you can read “Bloodchild” online, but you can get a copy of the June 84 issue of Asimov’s online for only a couple of bucks. Just buy it soon, before the inevitable day 80s SF magazines become priceless. Why not hoard them in your basement, like me? You’ll thank me later.

I’m going to hunt this one down. Like most African American science fiction writers I’m an Octavia Butler fan, although unlike many I’d been reading science fiction long before she was published. I’ll have to tell my friends about this one. Thanks for the heads up!

You’re most welcome. I wish it were more readily available, but it was reprinted in Dozois’ Year’s Best Science Fiction.

[…] which I talked about here. The same thing happened with Octavia E. Butler’s “Bloodchild” (in the June 1984 issue of Isaac Asimov’s Science Fiction Magazine), and then George R.R. […]

[…] last covered Asimov’s Science Fiction, believe it or not, with the June 1984 issue. That’s a little out of sequence, even for us. We’ll do better, we […]

I don’t know how long it has been up, or if it will remain, but there is a copy up on the Washington Post as part of a review for the collection.