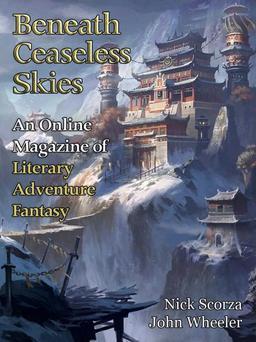 The December 10th issue of Beneath Ceaseless Skies, issue #188, arrives with a brand new cover, “Huashan Temple” by Xiao Ran, a concept artist from Shanghai, China. Click on the image at right to see a bigger version.

Issue #188 has short fiction from Nick Scorza and John Wheeler, and a reprint (from issue #120) by Laura E. Price.

“Eyes Beyond the Fire” by Nick Scorza
When no eyes were on her, Lys frayed a rope with her knife — choosing one which would not harm the sails but would send an iron pulley tumbling into the sea. When Tamlen angrily ordered a replacement brought from the cargo hold, Lys was first to volunteer and on her way before anyone could deny her.

“The Rest Will Blur Together” by John Wheeler
I am Melika. And that is all, now. My grandfather — I believe he was my grandfather — said that our memories make us who we are. I hope that he was wrong, for if he spoke the truth, then I am no one.

From the Archives:
“The Drowned Man” by Laura E. Price
The drowned man brushed past Corwyn in his hurry to get away from her sister.

Nick Scorza has been published in magazines such as Something Wicked, Hobart, and Dogwood. John Wheeler is a graduate of the Alpha Science Fiction and Fantasy Workshop for Young Writers; this looks like his first sale.

We last covered Beneath Ceaseless Skies with issue #187.