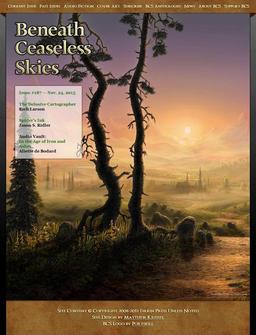 Issue #187 of BCS has short fiction from Rich Larson and Jason S. Ridler, and an Audio Vault podcast (from issue #33) by Aliette de Bodard. It is cover-dated November 24.

“The Delusive Cartographer” by Rich Larson
Crane needed no further invitation. The pain in his back was forgotten now that he was finally here, finally close. He charted a foot over from the cell’s sliver window and down to the floor. He’d doubted, in the darkest hours of the night. He’d doubted the whole thing. But the groove was exactly where the cartographer had described it.

“Spider’s Ink” by Jason S. Ridler
To catch a bug, you must burn him out. That had been our experience with Macti spies and rebels. Under the authority of the Wayfaring House we came with black fire and warned all that if the Spider known as Heriz was not returned, we would decree the island corrupted and purify by shot and flame. It had worked in Jani, Uurun, and it would work here.

Audio Vault Podcast:
“In the Age of Iron and Ashes” by Aliette de Bodard

Rich Larson has been nominated for the Sturgeon Award, and his work has appeared in Asimov’s, Analog, Clarkesworld, F&SF, and many other places. Jason S. Ridler has published over sixty stories in such magazines as The Big Click, Beneath Ceaseless Skies, and Out of the Gutter.

We last covered Beneath Ceaseless Skies with issue #186.