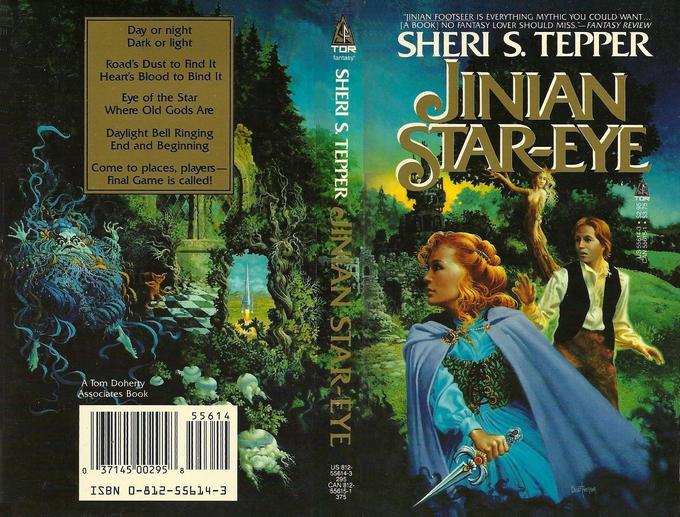 Jinian Star-Eye was the last volume of Sheri S. Tepper’s monumental nine-volume fantasy opus, The True Game. On course, in keeping with 1980s-era fantasy marketing, no mention was made of this anywhere on the book. However, if you were an attentive buyer, you might have noticed the poem on the back, a sure tip that this was part of the series. Poetry as a marketing device, to the best of my knowledge, was an idea that was born and died with this series.

We’ve covered several of the previous installments over the years, but not the entire series. It began with King’s Blood Four in 1983, Tepper’s first novel. Subsequent volumes were divided into a trio of trilogies, starting with the True Game trilogy:

Followed by the tales of Mavin Manyshaped:

And finally the Jinian books.

I bought The Song of Mavin Manyshaped as part of a handsome collection of four Sheri S. Tepper paperbacks on eBay. No, I haven’t read them all yet. Have a little patience.

Jinian Star-Eye was published by Tor Books in August 1986. It is 252 pages, originally priced at $2.95. The wraparound cover art is by James C. Christensen. It was reprinted in the US as part of The End of the Game, an omnibus volume from the Science Fiction Book Club, in January 1987. There is no digital edition.

I believe there are digital editions in the UK from the SF gateway (curses that we cannot access it from the states!)

I’ve read them all and quite liked them, although I had the “excellent storyteller, terrible prose” problem when reading them.

Sorry you didn’t think Tepper’s prose was up to scratch. Do you think she’s gotten better?

I don’t know, as I never read anything further past the 9 books of the True Game.