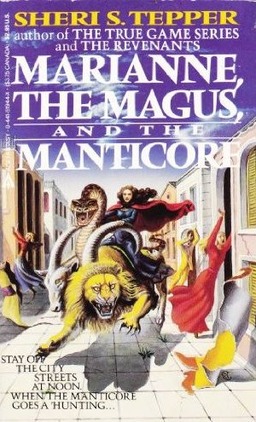 I’ve written a lot of Vintage Treasures articles (over 400 now, believe it or not.) Most of them feature collectible paperbacks and virtually all of them — even the old Ace Doubles from the 1950s — are inexpensive to acquire for the patient collector. It’s very, very rare that I discuss one that costs as much as a new paperback, for example.

Sheri S. Tepper’s Marianne, The Magus, and the Manticore is an exception. Used copies start at $10 – 15 on both Amazon and eBay and copies in good shape will run you closer to $40. It’s not particularly old — published in 1985 — and it’s not even all that rare. So why is it so expensive? Because it was published just before her groundbreaking novel The Gate to Women’s Country (1988) and the Hugo-nominated Grass (1989). In other words, before Tepper became a Big Name in the industry. The book was reprinted once, in 1988, but has now been out of print for nearly 30 years. Tepper has a great many fans, and the law of supply and demand dictates that the volumes in this trilogy are likely to be hot properties for some time.

Marianne was born to luxury in the tiny nation of Alphenlicht, nestled in the mountains between Turkey and Iraq. The her parents died, leaving control of their fortune to the older brother she fears. Struggling to make her way as a student in America, Alphenlicht seems as unreal as a fairy tale, her childhood there as distant as a dream…

… Until the Magus comes to claim her, and the Black Madame to destroy her, and the Manticore to hunt her down through the streets of another world. For there is magic in the land of Alphenlicht. Magic in Marianne’s blood, and magic in her soul…

Marianne, The Magus, and the Manticore was followed by two sequels in what’s now known as the Marianne series: Marianne, The Madame, and the Momentary Gods (1988), and Marianne, the Matchbox, and the Malachite Mouse (1989). A 592-page omnibus volume, The Marianne Trilogy, was offered briefly in paperback by Corgi in 1990 — it’s a great value, if you can find it.

Marianne, the Magus, and the Manticore was published December 1985 by Ace Books. It is 185 pages, originally priced at $2.95. The cover is by Kinuko Y. Craft. It it out of print and there is no digital edition.

The Gate to Women’s Country was a frightening book and a great read. Tepper is an excellent writer but her mysandrist views were too much for me to finish reading Grass. Was that tempered down a bit in this book? If so I’d read it.

Have you read them yet John? I know I’ve mentioned the Marianne trilogy to you before, one of my favorite fantasy trilogies ever, falling behind only His Dark Materials and Lord of the Rings (natch!). The prices have actually come down a lot from when I first became a Tepper fan (which wasn’t that long ago, actually): I had to pay $70 for the final volume in used condition, and that was one of the lesser priced copies in relatively good condition.

Unlike Wild Ape, I didn’t find “Grass” mysandrist at all. It’s actually one of my favorite sci-fi novels. I was astounded by the creativity (also one of the reasons I love the Marianne trilogy).

It’s her later books where her politics, which I actually agree with most of the time, became a little heavy handed. I loved “The Family Tree”, but the protagonist speechifies at one point as if we’d been dropped into an Ayn Rand novel.

I don’t mind politics in a novel, even politics I disagree with, but it needs to be subtle.

@Allen I might give The Family Tree a try. She is a good writer. I agree that politics should be subtle otherwise it takes you out of that world and puts you into this one. I like Heinlein but he got a little preachy now and then. Maybe I’ll find that old copy of Grass and give it a try again. When I first read Elric I didn’t like it. Years later I gave it a go and liked it.

No, I haven’t tried these yet. Believe it or not, this is the only one in the series I own. I’m trying to accumulate them all gradually… so far it’s been a challenge. 🙂