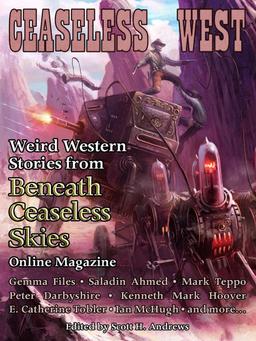 While I was pulling together my Wednesday post on Beneath Ceaseless Skies 171, I noticed that editor Scott H. Andrews had just released his latest BCS Anthology, Ceaseless West, a terrific-looking collection of weird western tales — which includes a short story by Black Gate‘s own Matthew David Surridge. I’m a big fan of weird westerns, and this one looks very promising indeed.

A fallen-angel gunslinger must defend a dusty town against hellspawn….

An eternal warrior marshal is drawn through time to face that which must be faced….

Previous anthologies from BCS include five volumes of Best of Beneath Ceaseless Skies, and the steampunk collection Ceaseless Steam.

“A Feast for Dust,” by Gemma Files
“The Angel Azrael Rode into the Town of Burnt Church on a Dead Horse,” by Peter Darbyshire
“Mister Hadj’s Sunset Ride,” by Saladin Ahmed
“Hangman,” by Erin Cashier
“Bandit and the Seventy Raccoon War,” by Don Allmon
“The Good Deaths, Part II,” by Angela Ambroz
“Between Two Treasons,” by Michael J. DeLuca
“Splitskin,” by E. Catherine Tobler
“The Sixth Day,” by Sylvia Anna Hivén
“Enginesong,” by Nathaniel Lee
“The Crooked Mile,” by Dan Rabarts
“Walking Still,” by C.T. Hutt
“The Heart of the Rail,” by Mark Teppo
“The Judge’s Right Hand,” by J.S. Bangs
“Not the Worst of Sins,” by Alan Baxter
“Songdogs,” by Ian McHugh
“Haxan,” by Kenneth Mark Hoover
“Pale,” by Kathryn Alle

Ceaseless West was published on April 28 by Firkin Press. It is available at Weightless Books, and for Kindle, iBooks, B&N, and Kobo. Get more details at the BCS website.