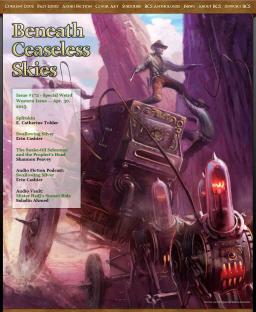 I love a good weird western. So you can imagine how intrigued I was by the latest issue of Beneath Ceaseless Skies, Scott H. Andrews’ magazine of literary adventure fantasy. It’s a special weird western issue, celebrating the release of their new themed anthology Ceaseless West. Issue 172 contains three new stories, a reprint, a podcast, and more.

“Splitskin” by E. Catherine Tobler
My love reveled in winter’s sunbroken days, when the light spills to the fresh-fallen snow to stab a person in the eyes. Gugán flit from path to stone, a trickster comfortable with his Raven heritage. I, as Eagle, startled at every shift of snow, caught always unawares in the bright sun as he pelted me with clumps of melting cold.

“Swallowing Silver” by Erin Cashier
John Halpern knew it should be a heavy weight on his conscience, to wake up and know that he was going to kill a thing that used to be a man. Whether it was or wasn’t was a topic of much internal contemplation for him as he walked up the long path to his brother-in-law’s house to ask for help. The fact that his brother-in-law was himself a devil-man did not escape him.

“The Snake-Oil Salesman and the Prophet’s Head” by Shannon Peavey
Leaving Leo alone, with his brother’s head. Leo stepped closer to the jar. Cary’s white-blond hair floated up from his skull, the tips waving slightly. It looked like strands of spiderweb, or exposed nerves. “You still telling people things they don’t want to hear?” He tapped on the glass. As if he might rouse it to speech.

The magazine supports itself though subscriptions, and also by selling anthologies, including the annual Best of BCS volumes and occasional themed books such as the steampunk anthology Ceaseless West. The anthologies each contain 15-18 stories and cost only $2.99-$3.99. Learn more at the magazine’s website.

The cover art this issue is “Bandits Assault a Stagecoach” by Ignacio Bazan Lazcano.

We last covered Beneath Ceaseless Skies with issue #171.

See our Late April Fantasy Magazine Rack here, and all of our recent magazine coverage here.

[…] I just saying that I love weird westerns? (Yes, I was.) And now comes the debut novel of British Fantasy Award nominee Molly Tanzer from Word Horde, […]