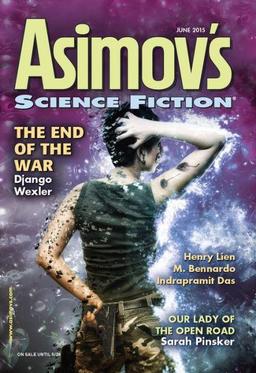 The June issue of Asimov’s SF has arrived in stores. It usually goes on sale simultaneously with its sister Dell Magazines publication, Analog, but I didn’t see it on the stands. I was especially interested in Analog this month, as it’s the commemorative 1000th issue, a pretty big milestone. (If you’re having trouble doing the math, it takes a monthly publication 83.3 years to produce 1,000 issues. Analog published its first issue, under the name Astounding Stories, in January 1930, and has been publishing more-or-less continuously ever since.) I guess I’ll have to make another trip to the bookstore this month.

Foreseeing the end of the world has been the business of SF writers ever since there was such a thing as science fiction, and back before it. What sort of end-of-the-world stories our primordial preliterate ancestors told we will never know, but the oldest such tale that has come down to us, the five-thousand-year-old Sumerian epic of Gilgamesh, describes a deluge that drowns the whole Earth, save only a certain Ziusudra… The Norse myths give us a terrible frost, the Fimbulwinter, in which all things die except a man and a woman who survive by hiding in a tree; they follow the usual redemptionist course and repeople the world, but then comes an even greater cataclysm, Ragnarok, the doom of the gods themselves, in which the stars fall, the earth sinks into the sea, and fire consumes everything….

As always, there’s lot of great fiction too. This month’s authors include Django Wexler, Henry Lien, and Sarah Pinsker.

Asimov’s Science Fiction is edited by Sheila Williams and published by Dell Magazines. The cover price is $4.99 for 112 pages; a one-year subscription is $34.97 (US) or $49.97 (International). It is also available in a variety of digital formats. The cover this issue is by Mathias Rosenthat. Check out the complete TOC, story excerpts, and additional free content at the website.