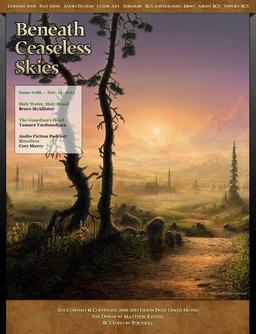 According to several reliable sources (and even some photographs), BCS editor Scott H. Andrews was at the World Fantasy Convention two weeks ago. I know most of the editors in the field, but I’ve never met Scott, and that’s an oversight I’d like to correct some day. Unfortunately, I wasn’t able to make the con this year. Ah well! Next year for sure.

Issue #186 has short fiction from Bruce McAllister and Tamara Vardomskaya, and a podcast by Cory Skerry. It is cover-dated November 12.

“Holy Water, Holy Blood” by Bruce McAllister
He was comparing me, a peasant boy, to himself, a pope, but this did not feel strange. He wanted us to be friends — that I could tell — so why not make of us equals?

“The Guardian’s Head “by Tamara Vardomskaya
This bridge, I knew, was itself a sign of the empress’s faith in us. A permanent bridge expected the water to yield and hold back.

Audio Fiction Podcast:
“Bloodless” by Cory Skerry
But she wouldn’t let him make it through the gate; the inside guards were there to deal with travelers. Kamalija was here to deal with monsters.

Bruce McAllister has been nominated for the Hugo, Nebula, and Shirley Jackson Awards. Tamara Vardomskaya is a Canadian writer who has previously appeared at Tor.com. Cory Skerry’s last story for Beneath Ceaseless Skies was “Sinking Among Lilies” (Issue #92).

The elusive Scott H. Andrews at the “Epic Fantasies”
panel at WFC (photo by Erin Komins)

We last covered Beneath Ceaseless Skies with issue #185.