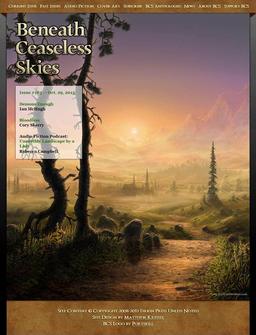 I’m getting behind on BCS again (already??), so it’s time to play catch-up.

Issue #185 is the special Halloween issue, and contains new fiction from Ian McHugh and Cory Skerry, a podcast by Rebecca Campbell, and a reprint by Christopher Green. It is cover-dated October 29.

“Demons Enough,” by Ian McHugh
The leech crouched in the broken hole where the window had been. Its glamour made it hard to discern details. Thorfinn had seen leeches in daylight, knew the ragged, filthy reality. His gaze flickered involuntarily up to the dark hollows of its eyes. It was an effort to tear away again from the hypnotic stare.

“Bloodless,” by Cory Skerry
The strange moment broke, and suddenly the stranger in her circle was an enemy again, and Kamalija struck out with her knife. He had already ducked back, and the blade dragged then stopped at the line where they’d poured her blood, as if the air was made of clay. She couldn’t force it any further, and she watched his back as he bounded into the forest.

Audio Fiction Podcast:
“Unearthly Landscape by a Lady” by Rebecca Campbell (Duration: 28:02 — 19.26MB)
I could not imagine that my charge could conceive something so strange, so unpleasant.

We last covered Beneath Ceaseless Skies with issue #183 and 184.