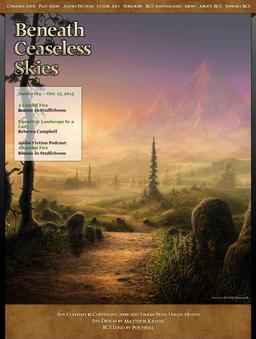 As I’ve noted before, if you neglect Scott H. Andrews and his magazine Beneath Ceaseless Skies for more than 15 days or so, he’ll publish two issues, making you look out of touch and behind the times. So here I am playing catch-up, because Scott publishes magazines faster than I can write about them. In this post I’m going to cover the latest issue, #184, as well as their big Seventh Anniversary Double-Issue, #183. The cover art for both issues is “Sundown” by Feliks Grzesiczek.

Let’s start with issue #184. The issue is cover-dated October 15, and contains two short stories, and a podcast.

“A Careful Fire” by Bonnie Jo Stufflebeam
They turned their backs to Mabella. Her stomach twisted as it did when she pilfered too many sweets from the kitchens. She wanted to say something and nothing. She wanted to run, but her feet throbbed. Instead she turned and walked from the winged women’s cackling silence.

“Unearthly Landscape by a Lady” by Rebecca Campbell
I found myself examining the impeccable rooms and gardens in these photographs, fearing that they, too, betrayed another world. I am ashamed to say that I was happy to have shut the door on such rooms, on Flora herself. But I could not erase the memory of the man with the Gatling gun, and the five-armed green creatures lying on the ground below him.

Audio Fiction Podcast:
A Careful Fire by Bonnie Jo Stufflebeam (Duration: 30:21 — 20.85MB)
She bursts each night when he leaves her. She does not wash the juice from her skin but hides the blue stains beneath her clothes.

Bonnie Jo Stufflebeam has published short stories in Clarkesworld, Lightspeed, Interzone, and previously in Beneath Ceaseless Skies. Rebecca Campbell is a Canadian writer and academic; her first novel, The Paradise Engine, appeared in 2013. 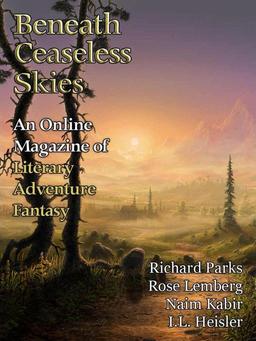 Issue #183 is their Seventh Anniversary Double-Issue, and contains short stories by Richard Parks, Rose Lemberg, Naim Kabir, and I.L. Heisler, a podcast by I.L. Heisler, and a reprint by Grace Seybold. It is cover dated October 1.

“The Bride Doll” by Richard Parks
The demon’s power would diminish in the light of day. All we had to do was survive the night, but as the cold settled in, I began to wonder if it might not be better to take my sword and my chances with the creature. If we weren’t killed immediately, at least maybe we could find some firewood.

“Geometries of Belonging” by Rose Lemberg
I do not speak again. In Little Hold, we eat a simple meal, the two of us alone. He does not care to select the wine. He drinks my choice without expression and ignores my clumsy pouring of it. Later, he asks if he can hurt me. I consent.

“The Four Schools” by Naim Kabir
“Once you remember them in your next life,” he lied, “you can travel to them to say sorry. Many make this kind of pilgrimage, I’ve seen it.” The poison sloshed as she absently shook the flask about.

“The Sons of Vincente” by I.L. Heisler
On its surface, the sculpture was masterful. But looking deeper, I perceived shapes forced into the marble, curves and planes that did not rise from within. This was not the image of a man, only of his skin, a polished surface without organs, skeleton, or a brain behind the handsome, murdering face.

Audio Fiction Podcast:
“The Sons of Vincente” by I.L. Heisler (Duration: 22:39 — 15.56MB)
The other hand held aloft his trophy—the severed head of my mother.

From the Archives:
“A Place to Stand” by Grace Seybold
She had dreamed of being a weaver, and a fisher, and a soldier, and many different wives, but the life of a seeker of knowledge had never come to her yet.

Richard Parks’ short story “Golden Bell, Seven, & the Marquis of Zeng” was published in Black Gate 1. Rose Lemberg co-edits (with Shweta Narayan) Stone Telling, a magazine of boundary-crossing poetry; on her own she’s edited Here, We Cross, The Moment of Change, and the upcoming An Alphabet of Embers. Naim Kabir has been published in Clarkesworld and The Journal of Unlikely Stories, and I.L. Heisler is a graduate of the Odyssey Writing Workshop. Matthew David Surridge reviewed Grace Seybold’s anthology Redwing for us earlier this year.

We last covered Beneath Ceaseless Skies with issue #182.