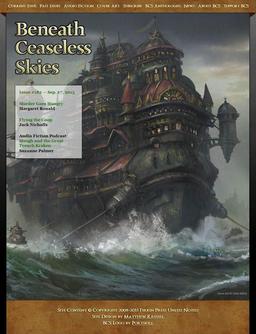 Beneath Ceaseless Skies #182 has new stories by Margaret Ronald and Jack Nicholls, a podcast by Suzanne Palmer, and a reprint by Wendy N. Wagner.

“Murder Goes Hungry” by Margaret Ronald
“It’s not—” I sighed as we reached the doors of the veterans’ wing. “It was a cruel thing for him to do. She has her vows, and too many of us veterans are too scarred to be any sort of decent companion.”

“Flying the Coop” by Jack Nicholls
They were in sight of the churchyard gates when the witch’s hut hopped out from between two buildings, thirty paces behind them.

Audio Fiction Podcast: “Moogh and the Great Trench Kraken” by Suzanne Palmer
It was more water than ever should be in one place, something so vast he scarcely could find the words. “Oh,” he said. “This is a very large river indeed.”

From the Archives: “Cold Iron and Green Vines” by Wendy N. Wagner (from BCS #69, May 19, 2011)
Most people didn’t bother replacing teeth; they all went wicker-and-cogwork as young as they could.

The cover art this issue is “Kodran Migrant Fleet” by Tyler Edlin. We last covered Beneath Ceaseless Skies with issue 181.