Gardner Dozois is one of the most accomplished and prolific editors in our field. He’s produced scores of anthologies, including 31 volumes of The Year’s Best Science Fiction, and won the Hugo Award for Best Professional Editor 15 times in 17 years from 1988 to 2004, as editor of Asimov’s Science Fiction.

In addition to championing countless new writers (as well as older and more neglected writers), he’s shown a lot of love for adventure SF and space opera over the years, which he calls “center-core SF.” In 1998 and 1999 he released two anthologies with the subtitle Adventure SF in the Grand Tradition, both with St. Martin’s/Griffin. They are probably my favorite of his numerous books:

The first volume collects fiction from 1948-1971, and the second from 1977-1998. Together they constitute the finest survey of adventure SF our field has seen.

Each story is given a lengthy and thoughtful introduction by Dozois, which neatly sums up the influence each author had on the field, their most important and vital works, and the impact the story had on the genre. The introductions alone, taken together, form a fascinating and highly readable history of this peculiar sub-genre at the core of science fiction.

In January 1999 the Science Fiction Book Club released a single-volume, 982-page hardcover omnibus collection of both books with a gorgeous wraparound cover by Vincent diFate. 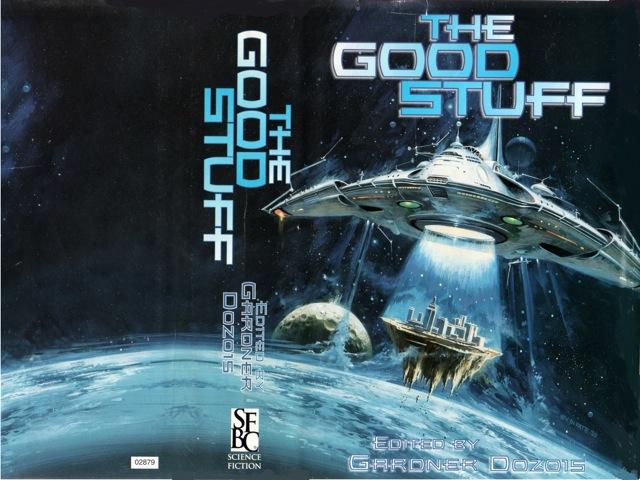 The hardcover edition is a little harder to track down, but it’s a fantastic bargain if you can find it.

A glance at the contents page, and a flip through Dozois’ lengthy intro, was all that was necessary to conjure up images of purposeful men in cast iron spaceships, shouting orders to each other across a steamy engine room as mighty stellar drives propelled them into the dark void… Well there aren’t any steamy engine rooms in The Good Old Stuff. But in the ships contained herein, the cold echo of footsteps could well come from iron walls, and the void of space is often very dark indeed. The wonderful and vigourous tales in this book feature everything that made early SF as rich as it was: decadent alien civilizations, ancient and mysterious artifacts, alien invasions, timeless mysteries hidden on the surface of uncharted worlds — and the resourceful men and women (yes, women — more than a few of the protagonists are female) of Earth, facing each challenge with style. In short, this is one of the best collections I’ve read in some time, and my choice for one of the best books of 1998…

Old Stuff” refers here to the spirit of early SF — the grand Space Opera, the planetary romance, what Dozois calls “the lush sword-and-planet” tale. Collected here are a fine assortment of short stories and novellas which celebrated that tradition, and in some cases took it in significant new directions.

There are tales of far exploration into the vastness of the galaxy in the face of hostile opposition (A.E. van Vogt’s “The Rull”), unknowable ancient alien civilizations (“The Last Days of Shandaker,” by Leigh Brackett), mysterious and deadly inter-dimensional invaders (James H. Schmitz’s superb, and oddly pastoral, “The Second Night of Summer”), rites of succession for a Galactic Empire (Jack Vance’s “The New Prime”), and brave men and women faced with terrible peril (just about any of them, really, but most especially Poul Anderson’s swashbuckling novella of intrepid explorers on a post-apocalyptic Earth coming face-to-face with strangely advanced barbarians from the far continent of Nor-Merika, “The Sky People.”)

Here’s the TOC for The Good Old Stuff:

And here’s the TOC for The Good New Stuff:

There are plenty of anthologies out there that will give you a decent overview of Adventure SF. But The Good Stuff is in a class by itself. It’s the equivalent of a Master’s degree class. By the time you’re done with both volumes, you’ll have a profound appreciation for the rich history of the genre, and the writers and editors who made it great.

More than that, however, these two books are enormously entertaining. They include a fine cross section of some of the very best Adventure SF ever written — including Tony Daniel’s brilliant far-future western “A Dry, Quiet War,” James H. Schmitz’s tale of sinister interdimensional invaders “The Second Night of Summer,” and one of the finest tales by the Queen of Space Opera herself, Leigh Brackett’s “The Last Days of Shandakor.”

The only thing I can think of that compares are the four follow-up volumes from Dozois, all in the same trade paperback format from St. Martins Press. We covered those here:

Explorers and The Furthest Horizon
Worldmakers and Supermen

Both volumes are readily available online, both new and used, at very reasonable prices. Digital versions are available from the publisher for $7.99 each.

Fond memories. Fwiw, here’s my review of THE GOOD OLD STUFF and THE GOOD NEW STUFF.

These really are first rate – I only wish Dozois had done a dozen more just like them. The only other series I can think of that pushes the same buttons (for me, anyway) is the group that Brian Aldiss edited – Galactic Empires (one and two), Perilous Planets, Evil Earths, and Space Odysseys. Those could all do with a reissue.

> Fwiw, here’s my review of THE GOOD OLD STUFF and THE GOOD NEW STUFF.

Those are great reviews! I am (as usual) astounded by your thoroughness. How you found time to do complete story-by-story reviews of both books is beyond me. I barely managed one-sentence reviews of a handful of stories in 1999, and I’d never manage something so time consuming these days.

For everyone else, check out John’s detailed reviews of the books at the links above.

> The only other series I can think of that pushes the same buttons (for me, anyway) is the group that Brian Aldiss edited –
> Galactic Empires (one and two), Perilous Planets, Evil Earths, and Space Odysseys. Those could all do with a reissue.

Ah! I love the Avon Aldiss volumes. You are absolutely right… they are marvelous, and they deserve an entry of their own.

The Avon wraparound covers were first rate, as well.

@John: Well, to be fair, I wrote those 9 years ago. Busy blog means I read less these days. 🙂