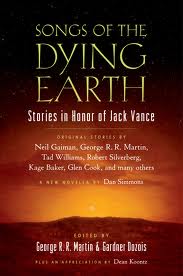 We get a lot of review copies here at the rooftop headquarters of Black Gate magazine, and it’s always a treat when the mail truck arrives. Getting free books never gets old, and we usually drop everything to tear open packages and pass around the most intriguing titles.

What is unusual is for a single book to bring all toil to a complete standstill for half an hour  (except for the tireless Howard Andrew Jones, who’s been missing in the restricted section of our pulp library for the last 48 hours). That’s exactly what happened when Songs of the Dying Earth (SotDE), edited by George R.R. Martin and Gardner Dozois, arrived today.

SotDE is a tribute collection; its subtitle is Stories in Honor of Jack Vance, and it contains nearly 700 pages of original fiction set in Vance’s Dying Earth — one of the great settings in all of fantasy, and home to Turjan the wizard, Rhialto the Marvellous, Cugel the Clever, and other fabulous characters. The Dying Earth is a far-future Terra, where the sun is on the verge of extinction, magic is potent and terrible, monsters roam the land, and the ruins of countless civilizations rest uneasily beneath layers of thin dust and vegetation. 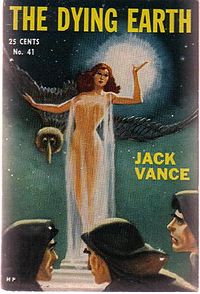 The table of contents is one of the most impressive I’ve ever seen — it read like a Who’s Who of the most influential fantasy authors of the decade, including Robert Silverberg, George R.R. Martin, Walter Jon Williams, Jeff VanderMeer, Tad Williams, Glen Cook, Tanith Lee, Howard Waldrop, Elizabeth Hand, Lucius Shepard, Neil Gaiman, Phyllis Eisenstein, Liz Williams, Matthew Hughes, Terry Dowling, Mike Resnick, Paula Volsky, Kage Baker, John C. Wright, and others. It also includes a big new novella from Dan Simmons, an appreciation by Dean Koontz, and a preface by Jack Vance himself.

SotDE was first published in a limited edition by Subterranean Press last July; since then the book — and many of the stories — have received considerable attention. Jeff VanderMeer’s H.P. Lovecraft-inspired tale “The Final Quest of the Wizard Sarnod” has been turned into a novel, and SotDE was nominated for Best Anthology in the 2010 Locus Awards. Neil Gaiman’s story “An Invocation of Incuriosity” took home the Best Short Story prize at the same Awards.

Songs of the Dying Earth: Stories in Honor of Jack Vance goes on sale Dec. 7th. It is published by Tor books, in hardcover for $27.99, and gets our highest recommendation.

Yes! I’ve been waiting for the (affordably priced) softcover…

This book sounds grand save for the absence of Michael Shea. Shea’s first novel, A Quest for Simbilis (Daw,1974), was a full-on Dying Earth pastiche authorized by Vance himself. As heretical as it may sound, I enjoyed Shea’s novel, especially its wonder-laden finale, as much as any Vance I’ve read.

I have the Subterranean Press edition, and let me tell you, this anthology is awesome. I barreled through half of it until I had to stop myself, taking my time enjoying the stories. I’ve never read Michael Shea’s Cugel sequel, but I have read his story “Hew The Tintmaster” in Swords & Dark Magic. I found it to be pretty entertaining but nowhere near the caliber of the stories found in this one. Quite possibly my favorite anthology of all time. 😀

This actually isn’t a softcover (although that’s doubtless coming at some point). It’s a very thick hardcover, still reasonably priced at $27.99. Amazon has it for just $16.66 if you pre-order it.

I agree — I scratched my head at the omission of Shea myself. He was the first to write authorized work in Vance’s world, and arguably he showed the way for everyone else.

On the other hand, as TheMoose65 points out, Shea just published a new Cugel story in SWORDS & DARK MAGIC, so perhaps he chose that anthology over SotDE to reach a new audience?

At least SotDE includes Matthew Hughes, who’s been writing stories and novels (the Archonate stories) set just before the era of the Dying Earth, “the penultimate age of Old Earth.” I’ve really been enjoying those.

The other author I miss is Gene Wolfe, whose Book of the New Sun was clearly influenced by Vance. I would have loved to see what he would have done in Vance’s playground.

Thanks for the great review! Sounds like the anthology lives us to expectations. 🙂

I loved this anthology. Highly recommended to those who liked the original. Especially because many of the stories live up to the spirit of the Dying Earth so beautifully.

This is a wonderful anthology. Probebly the best I’ve read in years. I too am suprised that michael Shea wasn’t included.
The “Quest for Simbilis” is a very enjoyable book. It’s very much a “vancian” style and story. I didn’t get into Jack Vance until 2 years ago. I has read some of his stuff back in the middle 70s and as a Jr. Highscholler couldn’t realy get into his stories. Now at 49 I can’t get enough and have been making up for lost time by reading one book after the other. I lucked out by finding an on-line shop over here (I’m an ex-pat Buckeye living in Germany.) and bought over 20 books of his at only €1 a pop. I stil haven’t figured out why I didn’t like him as a kid. These are to the most part the best stories I’ve read in years. I’m so hapy that I have quite a few to read still.
take care.
Doug