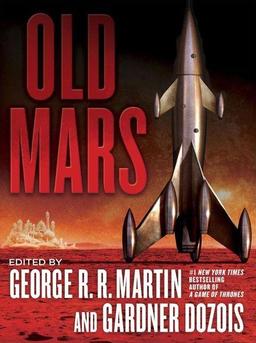 I heard George R.R. Martin and Gardner Dozois were doing a new science fiction anthology about Mars and I thought, “Eh, Mars. It’s just no fun anymore. Too bad they don’t write stories about Mars the way they used to — like Clark Ashton Smith’s brilliant “The Vaults of Yoh-Vombis,” or Leigh Brackett and C.L. Moore’s fabulous tales of decadent civilizations and inscrutable alien mysteries. No one has that much imagination any more. Bah! I think I’ll go yell at the kids to get off the lawn.”

Then Old Mars finally arrived and it thawed my mean old heart. Martin and Dozois have rallied some of the finest writers in the industry — like Michael Moorcock, Joe R. Lansdale, Ian Mcdonald, Howard Waldrop, Matthew Hughes, Phyllis Eisenstein, and many others — to write brand new tales of Mars in the classic pulp tradition. Here’s the marvelous book description:

Burroughs’s A Princess of Mars. Bradbury’s The Martian Chronicles. Heinlein’s Red Planet. These and so many more inspired generations of readers with a sense that science fiction’s greatest wonders did not necessarily lie far in the future or light-years across the galaxy but were to be found right now on a nearby world tantalizingly similar to our own — a red planet that burned like an ember in our night sky… and in our imaginations.

This new anthology of fifteen all-original science fiction stories, edited by George R. R. Martin and Gardner Dozois, celebrates the Golden Age of Science Fiction, an era filled with tales of interplanetary colonization and derring-do. Before the advent of powerful telescopes and space probes, our solar system could be imagined as teeming with strange life-forms and ancient civilizations — by no means always friendly to the dominant species of Earth. And of all the planets orbiting that G-class star we call the Sun, none was so steeped in an aura of romantic decadence, thrilling mystery, and gung-ho adventure as Mars.

Join such seminal contributors as Michael Moorcock, Mike Resnick, Joe R. Lansdale, S. M. Stirling, Mary Rosenblum, Ian McDonald, Liz Williams, James S. A. Corey, and others in this brilliant retro anthology that turns its back on the cold, all-but-airless Mars of the Mariner probes and instead embraces an older, more welcoming, more exotic Mars: a planet of ancient canals cutting through red deserts studded with the ruined cities of dying races.

Martin and Dozois may well have produced my dream anthology. You don’t know how thrilled I am to see this kind of open-hearted embrace of the genre’s pulp roots from a major publisher.

No doubt it’s a business risk, though. Do readers at large know — or care — enough about classic pulp SF to be interested in a book like this?

Bantam is also the publisher of George R.R. Martin’s internationally bestselling A Song of Ice and Fire, which probably helped, too.

Nonetheless, this is exactly the kind of book the old guard have been demanding for decades. If only publishers had the brains to produce exciting pulp science fiction again, I hear constantly, people would buy it by the truckload! And pass my cane, I’m gonna smack that kid buying a Star Wars book.

Well, here it is — a big budget release celebrating the classic pulp SF we trumpet here at Black Gate every day. I don’t know if it can generate the kind of buzz it needs to become a real success and spawn a new generation of retro-pulp SF… but I know that the buzz starts with us and I know it deserves our support.

I bought my copy last month. And if you’ve ever wondered what this industry could accomplish if writers dared to write stories the way they used to, I hope you’ll do the same.

Old Mars includes fifteen original stories, a 10-page introduction by George R. R. Martin, and is dedicated to six writers who made Mars loom large in our imaginations long before the Mariner and Curiosity probes put treads down on the Red Planet:

For Edgar Rice Burroughs,
Leigh Brackett, Catherine Moore,
Ray Bradbury, and Roger Zelazny,
who inspired this book,
and Robert Silverbeg,
who should have been in it.

Introduction: Red Planet Blues, by George R.R. Martin
“Martian Blood” by Allen M. Steele
“The Ugly Duckling” by Matthew Hughes
“The Wreck Of The Mars Adventure” by David D. Levine
“Swords Of Zar-tu-kan” by S.M. Stirling
“Shoals” by Mary Rosenblum
“In The Tombs Of The Martian Kings” by Mike Resnick
“Out Of Scarlight” by Liz Williams
“The Dead Sea-bottom Scrolls” by Howard Waldrop
“A Man Without Honor” by James S.A. Corey
“Written In Dust” by Melinda Snodgrass
“The Lost Canal” by Michael Moorcock
“The Sunstone” by Phyllis Eisenstein
“King Of The Cheap Romance” by Joe R. Lansdale
“Mariner” by Chris Roberson
“The Queen Of Night’s Aria” by Ian Mcdonald

“Glad you enjoyed it. It seems to be doing modestly well so far, although I doubt it’s going to make it on to the New York Times Bestseller list.

If you liked this one, keep an eye out for OLD VENUS from the same publisher; same kind of thing, although I think it’s even stronger than OLD MARS. Pub date is sometime in 2015.”

The Mars Rover ruined Mars fiction. I miss the old Mars stories too.

I picked this one up within a week of seeing it. I’ve only read a little, but I like what I’ve read so far. And I’m looking forward to Old Venus.

As you implied, John, I think the success of ASOIAF means Martin has considerable muscle to flex with regards to getting these anthologies published. And that’s a good thing. I know these types of projects drive his hardcore fanbase crazy because they perceive them as taking time away from Martin’s work on the rest of the series, but I honestly think the books would come out just as slow even if he didn’t work on anything else in between. That’s just his process.

Let me also give a shout-out to Joe R. Lansadle- very few writers have such a wide range. He’s written everything from splatterpunk to noir to straight-up pulp to Conan comics.

[…] also draws stories from the biggest anthologies of the year, like Old Mars, Dangerous Women, Rags and Bones, Once Upon a Time: New Fairy Tales, and An Aura of […]

[…] of my favorite anthologies of last year was Old Mars, a pulp-inspired tribute to “the Golden Age of Science Fiction, an era filled with tales of […]

[…] planet with strange creatures lurking amidst the dripping vegetation. Old Venus is a follow-up to Old Mars, a tribute to “the Golden Age of Science Fiction, an era filled with tales of interplanetary […]