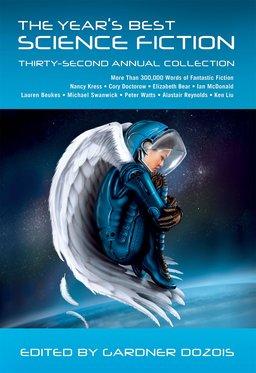 Gardner is usually a pretty fair predictor of the Hugo Awards, and I when the Hugo ballot arrived every year I could usually just open up his volume and read most of the nominees. Not this year. As most folks know, this year the Hugo ballot was hijacked by the Rabid Puppies campaign (and, to a much lesser extent, the much smaller Sad Puppy campaign).

None of the stories on the Hugo ballot this year was selected by Gardner for his Year’s Best (or for any other Best of the Year anthology that I’m aware of).

But fret not. Here’s your chance to see what magnificent tales could have been on the Hugo ballot this year — all assembled for you in one handsome package.

Our previous coverage of this volume is here.

The Year’s Best Science Fiction: Thirty-Second Annual Collection was edited by Gardner Dozois and published by St. Martin’s Griffin on July 7, 2015. It is 704 pages, priced at $40 in hardcover, $22.99 in trade paperback, and $10.99 for the digital edition. The cover is by Maurizio Manzieri.

I’m about halfway through this (reading longest stories first) and it’s wonderful. More enjoyable stories (for me) than usual this year, so far.

And how do you get time to read with all those posts you do, John?