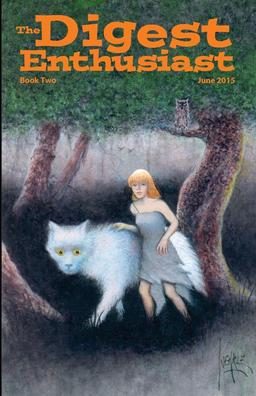 I love a lot of aspects of the fantasy and science fiction genres — books, movies, TV shows, comics, conventions, board games, video games. But it was digest magazines like Analog, Asimov’s, and F&SF that first brought me into the field, and which formed the heart of the genre for me. It was in the pages of those magazines that I first discovered my favorite authors, and was exposed to the news, reviews, interviews, art and gossip that gradually taught me just how rich the field was — and taught me to love it.

I share this experience with a lot of older fans, and that’s why you see so many reviews of old digest magazines like Galaxy, Venture, Amazing and Fantastic here at Black Gate. It’s not just that they contain great old fiction, but because the magazines are so vital to the history of the field. (And, let’s face it, because of the great cover art.) SF, fantasy and mystery digests are inexpensive and easy to collect, and at every decent-sized convention or trade show, there’s sure to be a few fans selling, buying, and swapping digest magazines.

So I was delighted to see the first issue of The Digest Enthusiast in January of this year. The debut issue was 116 pages and packed with articles on Galaxy, protective sleeves, Walter Gibson’s The Big Story, and much more, including interviews with F&SF editor Gordon Van Gelder, Phyllis Galde, editor and publisher of Fate magazine, and more.

But before I could get around to ordering it, the second issue arrived — and this one’s even bigger. Weighing it at a whopping 151 pages, it contains articles on Borderline, the Astounding Trading Cards, The Mysterious Traveler Magazine, H.L Gold’s Beyond Fantasy Fiction, Archie Comics Digests, and much more. There’s also reviews of current magazines, including Monster! #15, Asimov’s July 2015, and the July issue of Analog. There’s even four pieces of original short fiction!

Needless to say, I ordered a copy of the second issue as soon as it was available. It arrived yesterday, and I’m thoroughly enjoying it. I especially appreciated the reviews of current digests, which I found well written and enthusiastic. Here’s Rudolph Schmidt on Black Gate blogger Derek Kunsken’s novella “Pollen From a Future Harvest,” in the July issue of Asimov’s.

Derek Kunsken’s novella “Pollen From a Future Harvest” is both the issue’s final story and my favorite. One of Kunsken’s lines actually describes it quite nicely, “It was astonishing and humbling, like looking at a work of art possessed of dizzying complexity.” Although highly engaging, it’s not a light read, a tale with a little of everything — murder mystery, espionage, romance, politics and enough thought-provoking concepts to keep most any SF reader happy.

For example communication with the vegetable intelligences: “The intelligences themselves had a series of stomata on their chests that opened and closed, releasing chemical signals that traveled in nearly straight lines through the rarefied atmosphere, to smell receptors on their companions. Some thousand scents made up their vocabulary.

“Passenger for the Night Train” by Joe Wehrle, Jr.
“Sweet and Sour” by D.D. Ploog
“Painesville” by Richard Krauss
“In the Fight for His Life” by John Kuharik

The magazine is clearly produced by people who share my love of digests old and new, and they clearly aim for a wide audience. It’s even introduced me to a few new digests! Editor Arkay Olgar says in his introduction:

We’ve expanded our page count to ~150 pages and intend to settle there in future editions. Our goal is to provide a mix of crime, fantasy, science fiction, supernatural and comics content each outing. Things may skew a little in one direction or another, but the intent is to touch on every category, every time.

But you don’t need to be a grizzled old fan to enjoy The Digest Enthusiast. Many of the articles are geared towards those new to the hobby. Whether you’re a long time collector or just someone curious about what’s new in digests today, you’ll find it fascinating and entertaining. My verdict: Highly recommended.

The Digest Enthusiast is edited by Arkay Olgar and published, I dunno, roughly every six months? by Larrque Press. Issue #2 was published in June 21, 2015. It is 151 pages, priced at $8.99. There is no digital edition. The cover is by Joe Wehrle, Jr.

This gets a high recommendation from me, as well. Great stuff.

Actually there IS a digital edition, and I know because I just bought it from Amazon for about 2 euro and 60 cents – together with the first issue, which goes for 1.99. 🙂

Glad to hear it, Bill!

Davide – Do you have a link for the digital version? I certainly believe you, but I can’t find a US source.

This is the link for the first issue, on the Amazon
http://www.amazon.com/Digest-Enthusiast-book-one-magazines-ebook/dp/B00T1UE8GW

And this is the link for the second issue…

Many thanks, David! I wonder why it’s listed completely separately from the physical edition….