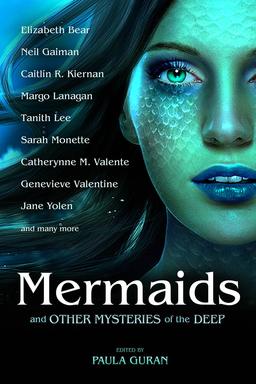 Paula Guran edits The Year’s Best Dark Fantasy & Horror every year, and her most recent anthology was Blood Sisters, packed full of vampire stories by women. So it’s good to see her deliver something outside the horror genre… or, perhaps, it’s good to see her keen eye for dark fantasy brought to bear on a subgenre that’s usually associated with The Little Mermaid.

In Mermaids and Other Mysteries of the Deep, Paula has assembled a wide range of fiction by Tanith Lee, Peter S. Beagle, Samuel R. Delany, Neil Gaiman, Delia Sherman, Gene Wolfe, and others. Here’s a brief snippet from her introduction:

Powerful and incomprehensible, the oceans were thought to be the home of many monstrous creatures — sea serpents and dragons; the Norse Kraken, Greek Charybdis, Japanese Isonade, Biblical Leviathan. Rivers have monsters, too, like the Yacumama of the Amazon River or the malevolent zin, who live in the Niger River. As for lakes, even if you’ve never heard of the Welsh afanc, you know the Scottish Loch Ness monster.

The waters of the world were also believed to contain mythological creatures whose behaviors were as inconstant as our feelings about the mysteries of the deep. As Jane Yolen has said, “It is the allure of the beautiful, unattainable, mysterious Other. In every culture in every clime, there are stories of such creatures in the oceans, rivers, ponds, wells. Water is such a mutable, magical substance itself, the human imagination simply cannot believe it’s not peopled as the earth is. We want there to be such underwater civilizations and — not finding them — we invent them and then turn around and believe in our own invention.”

And here’s the text from the back of the book:

The Sea is Full of Mysteries

…and rivers shelter the unknown. Dating back to ancient Assyria, folkloric tales of mermaids, sirens, rusalka, nymphs, selkes, and other seafolk are found in many cultures, including those of Europe, Africa, the Near East and Asia. Dangerous or benevolent, seductive or sinister – modern masters of fantasy continue to create new legends of these creatures that enchant and entertain us more than ever. Gathered here are some of the finest of these stories. Immerse yourself in this wonderful – and sometimes wicked – watery world!

Paula Guran has been extremely busy over the past few years. Our coverage of her recent anthologies includes:

Mermaids and Other Mysteries of the Deep was published by Prime Books on April 14, 2015. It is 384 pages, priced at $15.95 in trade paperback, and $6.99 for the digital edition. The cover is by Renu Sharma. See more details at the Prime website.