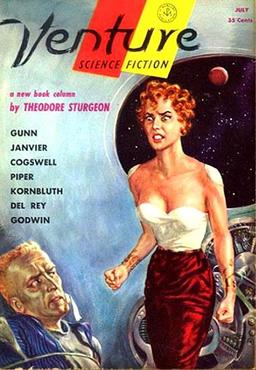 I’ve written about Venture before, a short-lived companion to F&SF, first in the late ’50s, then again in the late ’60s to early ’70s. It tried to be a bit more adventure-oriented, and also (at least in its first incarnation) seemed to try to have a sexier image.

The feature list is pretty thin – most significant is the first book review column by Theodore Sturgeon, whom the editor proudly introduces as “the discoverer and distinguished proponent of that basic maxim known as “Sturgeon’s Law.” He reviews only one book, Martin Greenberg’s collection of non-fiction of SF interest, Coming Attractions. The inside back cover has a feature called “Venturing,” short bio-ish pieces about a few of the issue’s authors (Sturgeon, James Gunn, and “Paul Janvier”). The cover is by Ed Emshwiller (in my opinion, not one of his better efforts), and the interior art is by John Giunta and by Cindy Smith. 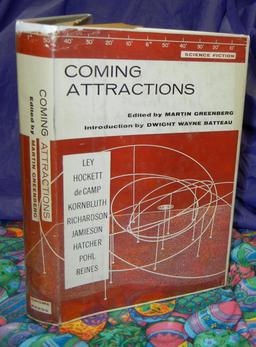 No little known writers in this bunch, so let’s go from the top. Among the first stories by Grand Master James E. Gunn to make a lasting impact were those eventually fixed up into the novel/collection The Immortals (1962). “Not So Great An Enemy” is the second of these. Its primary focus is on Ben Grayle, a seventh-year medic in a future in which medical service is only given to those who can afford a contract, and in which only those trained in the medical system can give care.

>On a trip to a dangerous part of the city (a city which seems to be Kansas City, by the way – Gunn was born there and has long been a Professor at Kansas University, not far from KC), Grayle encounters a blind woman and an old man who turns out to be a legendary doctor who disappeared years previously. Their message for Grayle is that the system is corrupt, and that he needs to learn to be a true healer. The rest of the plot concerns the desire of a city boss for treatment… the story fairly clearly is part of an ongoing series. It’s pretty decent work.

“Paul Janvier” may be a little known name to some, but that’s because it’s a pseudonym, one of Algis Budrys’ most used pseudonyms. Todd Deerbush is a sad sack of a man, and we meet him in a small town that is undergoing an unexplainable rash of thefts. He realizes that the explanation has to be someone with a talent he has himself… the ability to make others do what they want. He’s part of a group that recruits those people, for their own safety and for the good of the world. But when they find the person – a rather sad young woman – her powers turn out to be much more dangerous than anyone they’ve yet encountered… leaving sad sack Deerbush to make a wrenching decision. Another pretty solid story, very much in the emotionally heightened mode of Budrys’ best work.

Cogswell’s “Aces Loaded” is a pretty straightforward story about a man sent to a planet controlled by a mob boss of sorts with the assignment of getting him away from the planet, where he can be arrested. There’s a “silent partner” ready to help… and a pretty little redhead… decent entertainment, nothing much special. 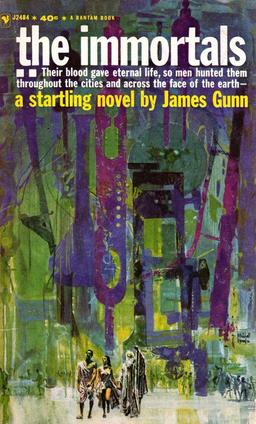 H. Beam Piper’s “The Keeper” is pure adventure set on a planet in the grip of an Ice Age, where old Raud the Keeper lives in a cold Northern village. He is custodian of a long held treasure, a Crown. One day strangers from the stars come to visit, and admire the Crown. The next day, the Crown is stolen, so Raud sets out on a trek to recover it. This is enjoyable work, with a bit of a mystery (not terribly involving) at its heart.

“The Education of Tigress McCardle” is C. M. Kornbluth in satirical mode, though a bit more light-hearted than he could be. A young couple in a future (1998) with strict limits on population growth decides to have a baby. But first, they must prove their fitness, by successfully raising an artificial baby… naturally, chaos ensues. Another pretty good story.

Lester Del Rey was quite fond of dealing with religion in his stories. In “Seat of Judgment,” an Earthman returns to a planet he last visited 30 years before. There is a prophet in the desert, stirring up trouble… he has miraculous powers, it is said, just like the virgin goddess he had encountered all those years ago.  Del Rey explicitly invokes a little-remembered book – Isaiah – in getting to the surprise ending, which wasn’t much of a surprise. Professional enough, but not a particularly special story.

Finally, “The Harvest” is a rather trivial short-short from Tom Godwin, again with a religious theme, as the Sky People harvest “fralings” from the people below… leading to a rather silly twist ending.

On the whole this is a pretty good old SF magazine issue, between a strong late Kornbluth story, and solid work from Gunn, Budrys, and Piper.

Rich Horton’s last piece for us was A Modest Proposal to Improve the Hugos. See all of Rich’s retro-reviews here.