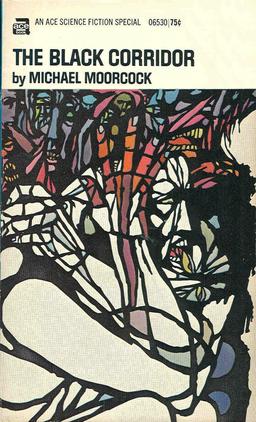 Last week I purchased a small collection of vintage paperbacks (something I do a lot). I bought it chiefly because it was inexpensive, all the books were in terrific shape… and it had a Michael Moorcock paperback I’d never seen before.

The Moorcock was The Black Corridor, an Ace Science Fiction Special, written in collaboration with Moorcock’s then-wife, Hilary Bailey (author of Frankenstein’s Bride and Fifty-First State.) The Ace Science Fiction Specials are highly prized by readers and collectors alike. They were edited by Terry Carr, and included first editions of Ursula K. Le Guin’s The Left Hand of Darkness, Alexei Panshin’s Rite of Passage, John Brunner’s The Jagged Orbit and The Traveler in Black, and William Gibson’s Neuromancer, among many others.

The Black Corridor is something of an odd bird. It wasn’t as successful or acclaimed as many of the other Ace Specials, and in fact it has never been reprinted in paperback in the US. But it does have its admirers. It was cited by Karl Edward Wagner as one of the thirteen best science-fiction horror novels, and Harlan Ellison said “Saying I enjoyed this book would be damning with faint praise… I was surprised by this book, at least eleven times.” Although it was never reprinted in paperback in the US, it was included as part of the omnibus collection Sailing to Utopia, The Tale of the Eternal Champion #5, published by Millennium (UK) and White Wolf (US), alongside The Ice Schooner, The Distant Suns, and the novelette “Flux.”

The Black Corridor is based on an incomplete fragment of a thriller written by Bailey, which Moorcock called “a straight future disaster story – collapse of society stuff.” Moorcock substantially re-drafted it, setting the bulk of the book in interstellar space, to tell a tale of an Earth collapsing into anarchy and war, and the starship and crew that flee into space. The book is fairly experimental, even for Moorcock. It contains sequences of typographical art where, as Moorcock put it, “words create a pattern of other letters forming other words,” and the narrative is enhanced with entries for the spaceship’s log, dream sequences, and computer printouts straight out of the 1960s.

The Black Corridor was published by Ace Books in 1969. It is 187 pages, priced at 75 cents. The cover is by Leo Dillon and Diane Dillon. There is no digital edition.

I remember this book for being one of Moorcock’s few forays into ‘proper’ sf – ie, the bulk of it took place on board a spaceship, as far as I remember. It was pretty untypical.

There seems to be a lot that’s untypical for this book.

I’ve seen this book on ebay a few times and have never heard anything about it.

In fact, I recently read Colin Greenwood’s collection of 1992 interviews with Moorcock called Michael Moorcock: Death is No Obstacle, which mentions or discusses some rather obscure works of Moorcock’s such as The Ice Schooner. But I don’t remember The Black Corridor even being mentioned in that book.

I think I remember seeing a hardcover version in the library back in the day? I only read this one in the Eternal Champion omnibus; I wasn’t too impressed.

> I recently read Colin Greenwood’s collection of 1992 interviews with Moorcock called Michael Moorcock: Death is No
> Obstacle, which mentions or discusses some rather obscure works of Moorcock’s such as The Ice Schooner. But I don’t
> remember The Black Corridor even being mentioned in that book.

Here at Black Gate, we cover the titles no one else dares touch.

I have to admit I’m not familiar with Michael Moorcock: Death is No Obstacle. Is it worth reading?

> I only read this one in the Eternal Champion omnibus; I wasn’t too impressed.

I should probably include the Eternal Champion omnibus collections in my ongoing omnibus articles. They’re long out of print, though.

The reading makes it all worthwhile, though.

I thought I’d purchased all the White Wolf omnibuses, but missed this one somehow. A quick look at Amazon reveals that White Wolf apparently only put it out in hardcover, and I’d been buying the trade paperback versions so that’s probably what happened.

At any rate, just ordered a “like new” HC version of the White Wolf omnibus from Amazon.

“Michael Moorcock: Death is No Obstacle. Is it worth reading?”

I really enjoyed the first chapter where Moorcock discussed his fantasy works such as Elric and Hawkmoon. But the rest of the book I found rather boring.