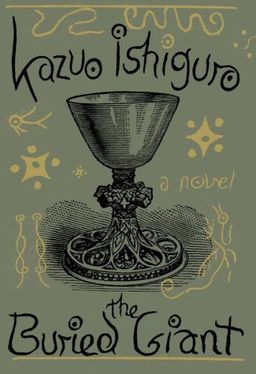 Kazuo Ishiguro (The Remains of the Day, The Unconsoled), is one of the most acclaimed novelists in the English language. His newest novel, The Buried Giant, is already generating intense interest — and debate — among fantasy fans. Witness two very different reactions… the first, from Neil Gaiman, writing in The New York Times:

This is a novel about an elderly couple going from one village to the next, set in a semi-historical England of the sixth or perhaps seventh century… Saxons and Britons live side by side in a post-Arthurian twilight, in a mythical time of ogres, sprites and dragons — most of all the dragon Querig, who dominates the second half of the book…

The narrative tone is dreamlike and measured. There are adventures, sword fights, betrayals, armies, cunning stratagems and monsters killed, but these things are told distantly, without the book’s pulse ever beating faster… Enemies are slain, but the deaths are never triumphant. A culmination of a planned trap for a troop of soldiers, worthy of a whodunit, is described in retrospect, once we already know what must have happened… this is, at its heart, a book about two people who are now past all adventure.

Gaiman’s review of the novel is largely positive, although he admits his “inability to fall in love with it.”

Ursula K. Le Guin, in contrast, has harshly criticized the book — and especially the author’s clear disdain for fantasy.

Le Guin quotes from a recent interview with Ishiguro on her blog:

Mr Ishiguro said to the interviewer, “Will readers follow me into this? Will they understand what I’m trying to do, or will they be prejudiced against the surface elements? Are they going to say this is fantasy?”

Well, yes, they probably will. Why not?

It appears that the author takes the word for an insult.

To me that is so insulting, it reflects such thoughtless prejudice, that I had to write this piece in response…

‘Surface elements,’ by which I take it he means ogres, dragons, Arthurian knights, mysterious boatmen, etc., which occur in certain works of great literary merit such as Beowulf, the Morte d’Arthur, and The Lord of the Rings, are also much imitated in contemporary commercial hackwork. Their presence or absence is not what constitutes a fantasy. Literary fantasy is the result of a vivid, powerful, coherent imagination drawing plausible impossibilities together into a vivid, powerful and coherent story, such as those mentioned, or The Odyssey, or Alice in Wonderland…

I respect what I think he was trying to do, but for me it didn’t work. It couldn’t work. No writer can successfully use the ‘surface elements’ of a literary genre — far less its profound capacities — for a serious purpose, while despising it to the point of fearing identification with it. I found reading the book painful. It was like watching a man falling from a high wire while he shouts to the audience, “Are they going say I’m a tight-rope walker?”

And see our complete survey of the best new books in March here.

For good or ill, it sounds as if Le Guin’s reaction to Ishiguro’s interview overshadowed her reading, and any potential appreciation, of his work. I’m not saying she’s wrong, for I’ve not read the book in question myself, but perhaps this was a point in which it was better to know less going in.

You’re almost certainly correct. But for readers who like to know a lot about a book before deciding what to read, Ishiguro’s comments may be helpful.

Le Guin leveled the same argument in response to a similar dismissive remark made by Margaret Atwood against being associated with science fiction.

First, I 100% agree with Le Guin’s criticism of the statements of both Atwood and Ishiguro (verily, I could not agree with it even 1% more than I do). Le Guin’s point also sets up a nice framework for her to give a brilliant defense of the speculative genres and their potential literary merits (I have quoted often from her earlier piece, and I’ll likely find myself quoting from the passage John posted above).

All that said, I admire the actual books in question about which Atwood was concerned (her Maddaddam Trilogy — at least the first two; I’ve not yet read the third). They’re good books, regardless the author’s own hang-ups about the — to her — repellant notion that they might be labeled science fiction.

I have also read the short stories of Ishiguro and admire them, too. Again, I feel as adamantly as Le Guin about this apparent prejudice he reveals against a “genre” even while he consciously writes a work clearly in that genre. His short stories, incidentally, have been described by some critics as magical realism (another term the literati use to get around what they see as the pejorative of “fantasy”).

Anyway, these off-the-cuff, disdainful comments by authors nervous about being labeled with a genre, and the impassioned ripostes from sharp critics like Le Guin and Michael Chabon, make for good discussion about genre and cultural perceptions. What they don’t necessarily do is indicate the merits of the works themselves, which may be flawed or brilliant (or both) quite apart from the writers’ own personal biases.

Just today I caught a snippet of NPR — I think it was the intro for Kurt Anderson’s Studio 360 — in which the show’s host asked, “Is Kazuo Ishiguro’s new novel The Buried Giant like Game of Thrones with a conscience? And should I read it?”

I wish I’d had a chance to hear the whole segment about that. The implication the Game of Thrones is a work without a conscience seems to me to be simply wrong-headed: some of the characters are without a conscience, and some of those who have consciences see them sorely tried, but the series itself is intensely concerned with issues of conscience. The reason the events presented to the reader (or viewer) have the impact they do is that Martin (and those adapting his work for the screen) are thinking about issues of conscience all the time. A work that presented the same incidents, without moral consideration on the part of the characters or painstakingly elicited from the reader, would never have succeeded on such a scale.

And should that NPR guy, who may or may not be Kurt Anderson, read Ishiguro’s novel? If his implication is that he’d only read it if it did turn out to be GOT with a conscience, then it sounds like the answer is no. If he meant to imply that he’d only read it if it were less part of the fantasy tradition than GOT, then probably it’s just what he wants. If he wanted to grow as a reader and a human being, and to experience a story of profound moral depth and technical accomplishment, a book worthy of a place in the canon forever…he should be reading Le Guin.

> Anyway, these off-the-cuff, disdainful comments by authors nervous about being labeled with a genre, and the impassioned
> ripostes from sharp critics like Le Guin and Michael Chabon, make for good discussion about genre and cultural
> perceptions. What they don’t necessarily do is indicate the merits of the works themselves

That’s well said, Nick. You’re entirely right that we can’t judge the works by the author’s biases regarding genre.

On the other hand, I have limited money to spend (and even more limited time to read), and unfortunately I have to be selective about which writers I support with a purchase these days. I prefer to support those writers who are working hard withing the genre — and also, working hard to acknowledge, support and encourage their fellow writers in the genre.

So these kinds of debates help me decide where to spend my money. Just to be clear, the money I had earmarked to buy THE BURIED GIANT will now go to another genre work.

> If he wanted to grow as a reader and a human being, and to experience a story of profound moral depth and technical
> accomplishment, a book worthy of a place in the canon forever…he should be reading Le Guin.

I don’t have anything to add to that… I just wanted to quote it here to make sure everyone saw it. 🙂 Well said, indeed.

“All that said, I admire the actual books in question about which Atwood was concerned (her Maddaddam Trilogy — at least the first two; I’ve not yet read the third). They’re good books, regardless the author’s own hang-ups about the — to her — repellant notion that they might be labeled science fiction.”

IIRC, while Le Guin objected to Atwood dismissiveness toward science fiction, she respected Atwood’s works, since they are worthy of respect from the point of view of science fiction as well as literature as a whole, regardless of what Atwood chose to call them. However, in her critique of the Buried Giant, Le Guin cited (as a critic should) her reasons why The Buried Giant don’t work for her – flat and dull dialogue and aimless action deprives the characters of life, and vague writing does the same for the world the novel is set in. Her offense at Ishiguro’s dismissive attitude toward fantasy led her to conclude that perhaps that dismissiveness led to the flaws she perceives. This conclusion may be incorrect, but that doesn’t mean her evaluation of the novel’s flaws are.

WHAT ABOUT GENRE? | The Manila Reader

[…] interesting discussion at TheBlackGate.com about Kazuo Ishiguro and Ursula Le Guin’s exchange is worth […]