Game Masters are getting a lot of appreciation these days. According to Wizards of the Coast, all of February was Dungeon Master Appreciation Month, a fact that they celebrated with a hilarious series of videos of a “Dungeon Master Support Group.” These are clearly intended to promote the recent 5th edition Dungeon Master’s Guide, but I’m a sucker for a brilliant viral promotional campaign. If you you’ve ever played a tabletop RPG, definitely check them out.

That being said, I’m not sure that the work we do as as Dungeon Masters (or Game Masters) quite warrants a full month. Turns out that we also have a day, which seems a bit more proportional!

March 4 was the “official” GM day, to celebrate Gamemasters everywhere. Some digging shows that this sacred gaming holiday dates back to 2002, when it was proposed on the EN World forums.

Paizo LLC, the makers of the Pathfinder Roleplaying Game, are celebrating the event by having a massive GM’s Day sale that runs through March 10. It’s a great time to buy the Core Rulebook, Bestiaries, GameMastery Guide, and other books to begin playing Pathfinder, but for those who already play Pathfinder RPG, here’s my tip of the top 5 books may not yet have but definitely want.

I fell in love with Pathfinder through this book. The world of Golarion that the folks at Paizo have created is absolutely one of the most vibrant gaming worlds I’ve ever encountered, diverse enough to contain virtually any kind of characters and fantasy story that you’d want to tell. From nations that mimic historical periods like ancient Egypt to the French and American revolutions to the jungles of Africa (all with fantasy flair added), as well as more traditional fantasy settings like Elven and Dwarven kingdoms, a nation of undead, magically-suppressed Mana Wastes, and so on, the Gamemaster has a wealth of options for setting up a great adventure. In addition to fairly lengthy descriptions of all of the nations of Golarion, it also includes information on the other planes, various key adversaries and factions, Golarion-specific feats, and so on. 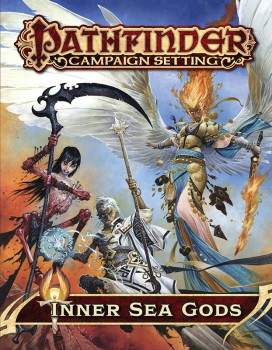 If your adventure is set in Golarion, the other key supplement that you need is this comprehensive look at the central deities of the Inner Sea region. This contains material that is otherwise distributed through a wide variety of Pathfinder Adventure Path supplements, with details of the goals and religious orders of the various faiths. There are also new rules related to particularly devout practitioners of the faith, including a feat that grants new deity-specific powers based on daily devotionals (a mechanic originally introduces in Chronicles of the Righteous), and then three prestige classes that are tied into those who want to practice this level of piety. Only one of the three prestige classes is designed with Clerics in mind; the other two are specifically aimed at non-clerical characters that feel called to serve a higher power in their adventures.

I reviewed this book in some detail when it was released back in October, but I recently gained a renewed appreciation for it. For those who don’t know, the Monster Codex focuses on 20 different classic monster races (kobolds, goblins, orcs, etc.) with a variety of class and ability variants, such as Goblin vulture riders or Ghoul assassins. I was running the Dragon’s Demand module (Paizo, Amazon) for my group, because it sets the stage well for some upcoming plot threads I am running on my original storyline. The problem is that the adventure module was created for adventurers of levels 1-7, and my group was level 5 going into the adventure. One of the main enemies in the first half of the adventure is a group of Kobolds, but the group would have wiped the floor with standard kobolds. So instead I pulled some Kobold Snipers, Kobold Blades, and Kobold Master Trappers out of the Monster Codex and used those in place of the run-of-the-mill kobolds, then boosted the bigger named kobolds from Dragon’s Demand with some advanced templates. The end result was a group of kobolds that was at least a reasonable challenge for my players.

Again, this is one that I’ve reviewed before, but with I have to admit that this supplement isn’t for everyone’s gaming style. The Ultimate Campaign book focuses on the parts of the adventure that take place away from the dungeon and battlefield. It provides systems related to running long-term campaigns, and not all of them will prove useful for all groups, such as alternate magical item creation rules, family relationships, honor codes, fame systems, and downtime rules that include aspects such as founding businesses and organizations, as well as founding a kingdom or having positions within an existing kingdom. Some of the systems offered, in fact, may even be actively detrimental, in the hands of someone who is obsessively rulebound. I can easily picture a strident rules lawyer in the group taking all of the fun out of the downtime system. But if you have a good group, this can really help flesh out the non-adventure aspects of the storytelling, rooting the characters in an existence that is more than merely killing monsters and taking their loot.

This book includes NPC templates for variants of characters from level 1 through 20 for all of the core classes, 4 templates for each of the prestige classes in the Core Rulebook, 10 levels of templates for NPC class characters, statistics for the Pathfinder iconic characters, and then appendices with sample animal companions and encounter groups. If you’re looking for a quick ally or adversary with a specific skillset, this is a fabulous go-to reference.