R.A. Lafferty is one of the finest short story writers our genre has seen, and “Nine Hundred Grandmothers,” a compact masterpiece originally published in the February 1966 issue of IF magazine, is one of the best short stories ever written. The tale of an asteroid miner who can’t stop himself from asking the deep questions, and what happens when he comes across a strange and ancient race of aliens who remember how life began, it’s funny, thought provoking, and totally, totally unique. A description you could apply to much of Lafferty’s output, now that I think about it.

Nine Hundred Grandmothers, Lafferty’s first collection, was published as an original paperback in Terry Carr’s legendary Ace Science Fiction Special line in 1970, and it contained much of his finest work, including “Slow Tuesday Night,” “Snuffles,” and “Thus We Frustrate Charlemagne.” The front cover (above left) was by Leo Dillon and Diane Dillon; the back cover is above center. It was reprinted in paperback by Ace in January 1982 with a new cover by Charles Mikolaycak (above right). While the Ace Special edition was first, the 1982 paperback is actually the more rare of the two, and highly sought by collectors.

Here’s the blurb from the inside front cover of the 1970 edition, with brief but tantalizing descriptions of some of the stories within.

In all of science fiction, there has never been a writer like R.A. Lafferty, the highly acclaimed author of Past Master and Fourth Mansions. His people are heroic, foolish, demonic, or mischievous, but always unpredictable, and his stories soar with imagination even while they chuckle at themselves.

Here at last are the finest of Lafferty’s shorter works, stories about:

…in all, twenty-one immensely enjoyable stories that will continue to delight you long after you’ve finished reading them. 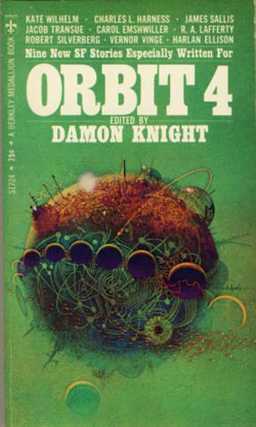 Nine Hundred Grandmothers contained twenty stories reprinted from magazines like Galaxy, If, World of Tomorrow, and F&SF, and one original story, “Frog on the Mountain.” Here’s the complete Table of Contents.

Nine Hundred Grandmothers was reprinted in hardcover by Dennis Dobson in 1975, and in paperback by Ace in 1982. It has been reprinted several times since, most recently in the UK by Gateway Orion in January, 2016.

While Lafferty produced over 200 short stories and some 20 collections in his lifetime, most of his fiction has not shared the same fate. The bulk of his short fiction has never been reprinted, and most of his collections were small print-run editions from small press publishers, virtually all of which were out of print before the start of the 21st Century.

All that has changed in the last few years as a result of Centipede Press, who are gathering Lafferty’s complete short fiction output in a dozen volumes. Three have appeared so far, all with covers by Jacob McMurray.

The three volumes are:

The third volume has an introduction by the late Bud Webster, Black Gate‘s poetry editor. Nine more volumes are due in the next few years.

Nine Hundred Grandmothers was published by Ace Books in 1970, as part of the Ace Science Fiction Special line. It is 318 pages, priced at 95 cents. The cover is by Leo Dillon and Diane Dillon.

Lafferty wrote a lot of “lighter” stories, with humor or irony, as well as the more serious stuff, which makes for a nice variety in any collection. Highly recommended.

Thanks for the rec, RK!

The Centipede volumes are lovely and everyone should own them.

Recently, Gollancz picked up ebook rights to many of Lafferty’s out-of-print works. An ebook edition of 900 Grandmothers (and other collections and some of the novels) is available everywhere but the US: https://www.amazon.co.uk/Nine-Hundred-Grandmothers-R-Lafferty-ebook/dp/B01A5TIIMM/

We’re all anxiously awaiting ebook availability in the US. Even more so, we also desperately want these books back IN PRINT, in both beautiful collector’s editions like the Centipede volumes and also in affordable trade or mass market editions.

In the past few years, there has been a resurgent interest in Lafferty.

There is a wonderful “bookzine” published twice a year which is always looking for intelligent new essays on Lafferty: http://www.feastoflaughter.org/

And two weeks ago, there was held the first ever R.A. Lafferty conference, LaffCon1: http://www.laffcon.org/

Wow! I had no idea. Thanks for the head’s up — especially about feastoflaughter.org!