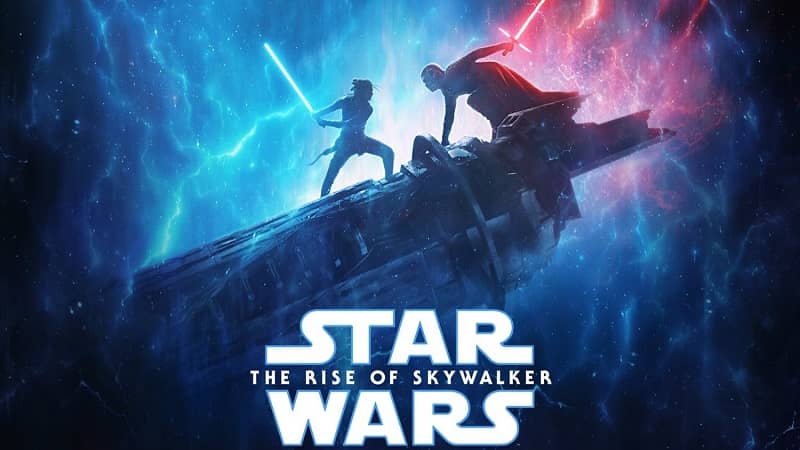 I was chatting with one of my best friends after seeing The Rise of Skywalker, and as writers do inevitably, we critiqued it. She said something partway through the conversation that I think was meant half as a joke: “perfection is a myth created by the man to keep us line, Brandon.”

It’s rare to come across a story that’s close to perfect, and no Star Wars movie ever has been. I was reluctant to talk TROS here since online discussions of major fandoms are sometimes as vitriolic as anything else, especially when you want to resoundingly say, “That was awesome!” about a film while acknowledging the faults. But if the Resistance can face the First Order, I can face you, Internet. Because by Lucas, I agree with fellow columnist Bob Byrne that TROS was “an excellent ending to the epic cycle” that is Star Wars.

SPOILERS from here on out, folks. You’ve been warned.

Let’s talk character first. The new heroes are the centerpiece here, regardless of how attached people are to our original trilogy characters – as it should be, since these movies are more for the new generation than the old (including me). Most of them reaches a satisfying character arc and finds the thing they’re looking for, I think. Rey discovers her true family, then turns it down for the family she wants. Ben Solo finds himself, and his arc is the best developed, not in least because of Adam Driver’s acting. Poe recaptures his faith in other people, after losing it in The Last Jedi. And Finn finds… his faith? I guess? 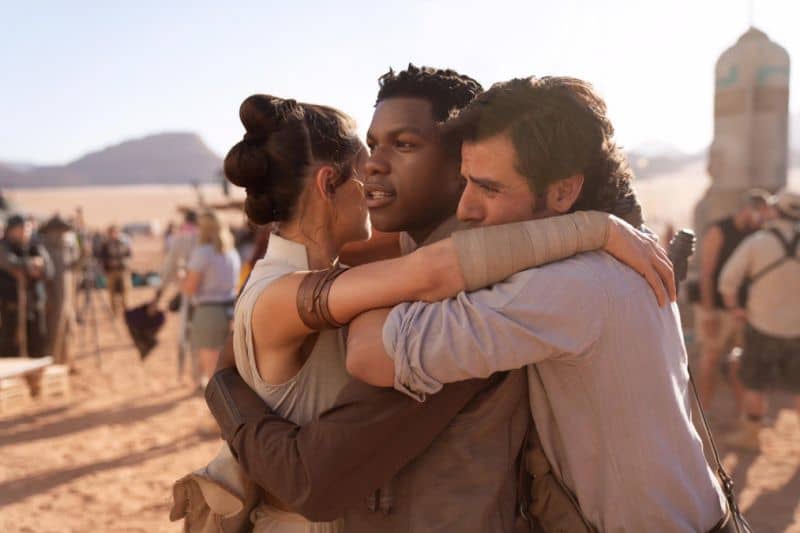 Of our new trilogy heroes, the one handled most poorly is Finn. I couldn’t figure out why I felt like he’d been short-changed until my friend pointed out that he’s the Samwise Gamgee of this party. He’s the one convinced that everything will work out. His faith in Rey is unwavering, because for some reason he imprinted on her in The Force Awakens even after seeing Poe first (I’m with you, Poe/Finn shippers. I really am.). Even when she Force pushes him away, he’s determined to stay with her, convinced that her slipping to the dark side needs a minor course correction. My issue is that his faith is never challenged, so his character development is pretty stilted. Which is a shame, since from The Force Awakens you could take his development in a bunch of directions, depending on what you throw at him. But in a movie as packed as TROS, you can’t have it all. 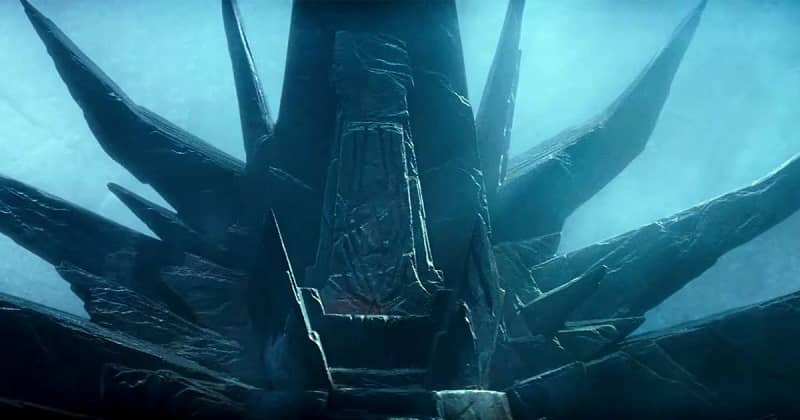 And this film is packed, which the Internet has talked about at length. My writer brain’s major issue with that has to do with Act One. Abrams offers up a mystery, and then solves it as quickly as a Chip Driver novel. The opening crawl describes a “mysterious broadcast” in Palpatine’s voice that’s freaking people out, and my immediate thought was, Awesome! Maybe Palpatine isn’t alive and someone’s using his likeness? I’m intrigued. Two seconds later, Kylo Ren tracks down Palpatine and meets him face-to-face. Maybe fifteen minutes after that, the Resistance gets intel from somewhere(?) confirming Palpatine is alive. Mystery solved.

If it were me, I’d have given Act One to tracking down this broadcast, with Palpatine as a looming, unseen specter. If the Emperor is actually back, that’s pretty bad – let’s live with that fear a bit. The Resistance and First Order could be hunting in tandem, with both teams crossing paths and witnessing Palpatine’s reveal at the same time. Then we could roll into tracking down information about Exogol, Rey and Kylo Ren facing off on Endor, and the final battle between good and evil.

We’d probably have needed a novel to handle all of that, though. Trying to wrap up a trilogy (in many ways, a nine-movie arc) isn’t something I’d want to be responsible for, and I give Abrams credit for concluding as many things as he did. Most of it felt earned and satisfying, including Leia’s role in the story (which wasn’t perfect, but remember what we said above). You can see the parts she would’ve filled if Carrie Fisher hadn’t passed away, or this were a novel where you don’t have to worry about actor availability. I’m pretty sure that’s why we got a Han Solo cameo, though the scene between him and Ben was fantastic as a replacement. 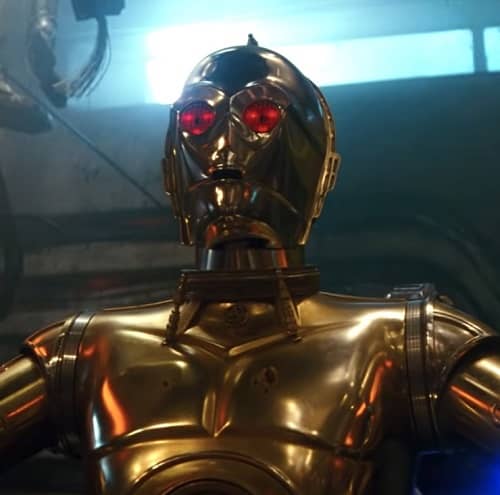 I can’t list every moment that made me grin or laugh or grab my partner’s arm, but there were so many that drew me in, the way a Star Wars movie should. Recognizing a masked Lando’s gait before he reveals his identity. Rey giving Poe hell after he lightspeed-skips the Falcon (and she drops a tree on BB-8). Hux revealing himself as not-quite-a-turncoat. Basically every moment with Threepio, who is still my favorite character and almost losing him was like a gut punch. Rey tuning into the voices of Jedi past and hearing everyone from Anakin to Yoda to Aayla Secura to Qui-Gon Jinn. And on and on, with fantastic worldbuilding and intense action that relies on the idea that Star Wars is an adventure fantasy more than anything else. Imperfect adventure fantasy, but that’s okay.

Bob Byrne said that TROS is “a return to the values, themes and messages of the original trilogy.” I’m not sure what those are, but there’s one moment that sticks out at me as the resounding oomph of this new trilogy. When Poe sees the Battle of Exogol turn and knows the Resistance is done, I already knew Lando had to show up with reinforcements. Hearing Lando’s voice saying, “There’s more of us,” I knew he brought enough help to turn the tide. Seeing the camera pan to that incredible shot of a ragtag fleet led by the Falcon, with the triumphant Star Wars theme music, was breathtaking in the way of fabulous storytelling. But the best moment is when the First Order officers are scrambling to figure out where this fleet came from, and someone says, “It’s not a fleet. It’s just … people.” That was one of the most powerful messages from The Last Jedi – that anyone can be heroic. Prevailing over the dark side doesn’t mean relying on a Skywalker, but banding together like the rebels we are. Sticking to that message and bringing in those reinforcements you expect is more than what writers call “keeping your promises” – it’s playing that out in a way that’s truly magical.

There’s more I could describe about why I loved this finale, and more I could say to critique it. I’m not sure yet where it ranks overall in my Star Wars standings, but I know I loved it. I hope you did, too, but if you didn’t, we can still discuss it. Just remember that perfection is a myth, and rebels shouldn’t be kept in line.

An Ottawa teacher by day, Brandon has been published in On Spec, Pulp Literature, Electric Athenaeum, and elsewhere. You can follow Brandon at brandoncrilly.wordpress.com or on Twitter: @B_Crilly. His latest publication is “Exactly What You Need” in The Best of Abyss & Apex: Volume 3, available now! He also talks fandom on “Broadcasts from the Wasteland,” with co-host Evan May and feature guests like Kelly Robson, Marie Bilodeau, Kevin Hearne, and Amal El-Mohtar. Check it out here: broadcastsfromthewasteland.com

The problem is, these days everyone wants to look for faults and problems, instead of just enjoying (or not) what’s put in front of them. Nothing can be “perfect” for everyone, so just relax and accept the effort made.

Since the rise of social media, everyone seems to think they are an authority, which of course they are not. Just because a dog can bark doesn’t mean it should.

“I’m with you, Poe/Finn shippers.”

It was highly entertaining, but I hated the ending of the Ben Solo/Rey arc. Why the kiss? Hollywood likes the redemption of truly villainous a tad too much.
I would have loved it if it was the love/faith of Finn that would have helped Rey in the end instead of the healing of Ben.

Barsoomia: May I ask why? I thought there was a bunch of potential chemistry written into their dialogue, and the way both Oscar Isaac and John Boyega played their interactions.

JimmyShelter: 100% agree about the kiss. That scene would’ve been perfect without it, since their connection (and Ben’s redemption) didn’t require romance. And good thought about Finn! If he’d had more of a role in saving Rey, that would have made his importance to the story more satisfying for me.

[…] I’m pretty sure that’s it! On the sidelines, I’m still writing occasionally for my column on BlackGate.com. I’ve been hard at work with an agent on a novella that’s quickly becoming a novel. […]