This week, I got fellow Sherlock Holmes friend Andrew Salmon to hold forth on hardboiled pulp. You’d be surprised how many Holmes fans are also pulpsters. Andrew is a leading light in the New Pulp movement (along with some other Black Gate guest posters, like Frank Schildiner, Will Murray and Duane Spurlock – who wrote last week’s post). Today, he takes us international, so read on!

A FRIEND IN TEED – The Lost World of Montreal Noir 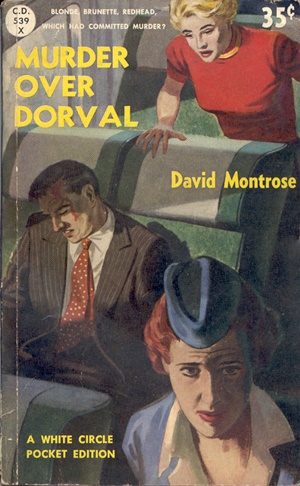 Thoughts of hardboiled fiction’s history conjure Mike Hammer’s New York or the sunny California of Sam Spade and Lew Archer. But the rich tradition of the genre along with Noir has expanded immensely, yielding rich gold mines in Berlin Noir and Dublin Noir to name two of many.

And yet there is a closer example of the universality of mean streets all over the world laid out in grimy exuberance in a hardboiled tale well told – and it is not a recent offshoot. I’m talking about the little known, until recently, forgotten hardboiled Canadian noir of the 1950s.

These were paperbacks to be found on spinner racks on both sides of the border. Issued by small printing houses in small print runs for the much smaller population of Canada, the pulp yarns churned out by a host of writers was long forgotten and scarce hardly sums up their availability. They aren’t collectible offerings from big names in publishing. The books came and went to molder in attics, landfills and to find second use helping to start fires on cold Canadian nights. Lost to time.

Until Ricochet Books, an arm of Vehicule Publishing, decided to pick up the gauntlet laid down by Hard Case Crime Books (among others) and began hunting up these lost gems. The books are widely available now in new editions with the old, classic covers and I urge you to look them up.

For the sake of this piece, however, I’d like to focus on a trio of novels that best fit the hardboiled school. Author Charles Ross Graham, writing as David Montrose, produced three Russell Teed novels between 1950 and 1953. Teed’s a former reporter turned private eye and in typically understated Canadian fashion works insurance claims and other non-violent crimes.

That is until the first book, The Crime on Cote Des Neiges (1951), which has him thrown into the investigation of a bootlegger’s murder. The police are convinced the widow is the guilty party and Teed has to get her out from under before it’s too late. What follows is an engaging mystery the hard drinking Teed weaves his way through amidst an entertaining presentation of Montreal when it was the Sin City of the North.

Graham, as Montrose, followed Teed’s first adventure with Murder Over Dorval (1952), a slight departure from the first though the hard drinking, put upon investigator is saddled with a spin on the locked room case. Flying back from New York City, Teed and the other passengers on the plane are racked with air-sickness and fail to see how a fellow passenger was bludgeoned to death during the flight. When the murder weapon can’t be found, the mystery deepens. But Teed’s got more on his plate to worry about. Folks want him dead and will slice, dice and shoot him if they get the chance. All in the name of a gorgeous redhead looking for her lost father. More great period details emerge in the telling and it is one fun read. 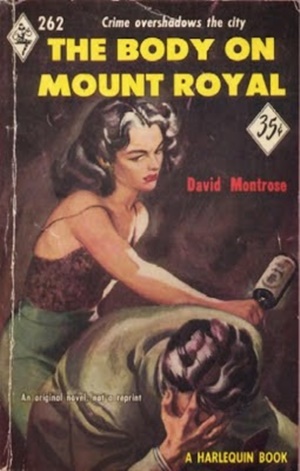 Montrose saved the best for last with The Body on Mount Royal (1953). It’s a shame Graham gave up on Teed after this one because he really hit his stride with the novel. Not only does the reader live and breathe those wild, and deadly, Montreal streets of the 1950s, but Teed has a great mystery to sink his teeth into. The pace, plotting, characterization are all spot on and the novels hums like a well-tooled engine. Booze, broads, gang wars and broken bones for Teed as he tries to discover why a man was beaten to death on Mount Royal. This one will have you shredding your fingers turning the pages.

As a whole, this trio of novels is firmly plucked from the Chandler/Hammett school. Well-plotted and entertaining, the stories break no new ground in that regard. The fun, and not just for this ex-Montrealer, is Graham/Montrose’s inadvertent chronicling of Montreal in the 1950s. Graham was writing what was reality to him with no idea, I’m certain, anyone would be looking at the books 68 years later. The result is three-time capsules of a long-lost time and place not often captured this way in fiction.

Los Angeles, New York City, San Francisco and other traditional locations of hardboiled goodness have been showcased so well from Perry Mason to Dirty Harry Callahan and such trips back in time are fun, making these places seem like home, albeit a dangerous one. Which is why today’s crop of hardboiled, like the brilliant Berlin Noir Bernie Gunther series from the late Philip Kerr, seem fresh and exciting though they cover very familiar plot points. As a novelist engaged in such pursuits myself, I’m familiar with the mountains of research one must do to re-create lost eras – in my case Victorian London in the 1890s – and it’s a great short cut for these great writers of yesteryear to just write what they saw.

The Teed trilogy are but three of more than a dozen reprints from Ricochet Books. All of them capture a Canada many I’m sure never knew existed. It’s a glimpse behind the yellowed pages of the old tourist brochures and Montreal and Toronto (shown in other re-issues) spring to life and one can easily immerse oneself into these lost worlds. If not for these new editions these great, pure pulp reads would remain forgotten and that’s a shame. The Teed trilogy has everything good hardboiled tales should have: heavy drinking, violence, murder, noir, babes, femme fatales and an engaging narrator. The real crime is that these novels have been out of print so long. Sure, they’re not quite ready to shoulder your Hammett, Chandler and Spillane off their revered spot on your bookshelf. But they can go toe to toe with most of the great legacy of hardboiled fun left us by 100s of purple prose pounding wordsmiths.

So if you’re in the mood for trip down some mean streets, 1950s Montreal has your poison and Russell Teed will be your guide – as long as you’re buying the Molsons.

One of the most prominent names in the New Pulp field is that of Andrew Salmon. If you go to his Amazon page (helpfully provided right here!), you’ll see just how much prolific he is! Andrew knows more about Frederick C. Davis than anybody around, which is why he wrote an entry on ‘The Moon Man’ stories in our first Black Gat run. Lately, he’s been making a name in the Sherlock Holmes field with his pastiches, including a trio for Paul Bishop’s Fight Club series.  He lives in Vancouver, British Columbia. He’s hard at work on the first Eby Stokes novel. If you don’t know her, then you need to read those Fight Club tales!