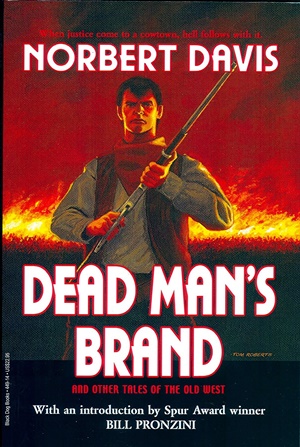 Wasn’t sure what to write about this morning. I went on a mini Sword and Sandals kick and recently finished Scott Oden’s Men of Bronze, and Howard Andrew Jones’ Desert of Souls (reviews coming, time willing). I’ve played a lot of Conan Exiles the past few months (when I could) and I definitely want to do a post on that. It’s Minecraft on Steroids (now THERE’S a post title!). My Game Night group dug into Shadows of Brimstone earlier this year and that was a lot of fun (not as brutal as Descent). And my son and I are revisiting Star Wars Destiny (a neat card/dice game).

I’ve continued to work on what I hope will be the definitive Max Latin (Norbert Davis) essay. Though, to be honest, there isn’t really much competition for that honorific. His Latin stories are even more woefully neglected than Davis himself is. Being in a Davis mood, I decided to get Black Dog Books’ Dead Man’s Brand. Davis is best known for his screwball hardboiled comedies (a style that didn’t get him many sales to Cap Shaw, famed editor of Black Mask).

But he wrote for several pulp genres, as well as for the higher-paying slicks. This collection includes eight solid westerns from the pulps, including Dime Western Magazine and Star Western. There’s a good introduction by Bill Pronzini, and in the afterword, Ed Hulse talks about the lone movie adapted from a Davis story (there’s further proof of the under-valuing of Davis’ work).

Maybe I can talk James Reasoner or Duane Spurlock into doing a much better essay on Davis’ westerns than I could possibly ever hope to write, but I’m just going to talk about the first story: “A Gunsmoke Case for Major Cain,” which appeared in Dime Western in October, 1940.

We don’t learn all the details right away, but the story opens with a young girl named Missy trying to crawl under a covered wagon while her drunken uncle (Pops Reese) whips her with a quirt (a short-handled riding whip with a braided leather lash). The coffee she gave him was too hot and burned his tongue. That’s the kind of guy he is. Well, that, and he’s taking her to the town of Cranston to sell her to the local boss – presumably to become a whore in his saloon.

One of Pops sons, Dade, knocks him out and tells Missy to climb back up into the wagon. He has no familial interest in the girl – he doesn’t want her marked up before they sell her to Jessup. The other, more dangerous son, Hi, had calmly watched the whole thing, whittling with his knife. After a bit, Missy sneaks out of the wagon, off into the brush, and runs away.

We learn in this first chapter, that Missy is ill-used. And that while Pops is the head of the ‘gang,’ he is really just a mean, old, drunk. Dade is the louder, seemingly more dangerous son. But the quiet, unemotional Hi, is really the one to be wary of. Davis tells us that Dade is fast with his gun, but not as dangerous as Hi, with his knife.

The next chapter opens with Cain,

“…a tall man, clad all in black, and his face under the brim of his black dress Stetson had a pale, quietly withdrawn look about it.”

Major Cain is a lawyer, out to serve some justice. He’s accompanied by Stringer, a man as talkative and outgoing as Cain is quiet and serious. Stringer is constantly accompanied by his .45-70 Springfield Army Carbine. Cain uses his words, but backs them up with a pair of pistols when needed.

As the stage arrives in town with Cain and Stringer aboard, the Reese gang is ambushing a young man named Perkins, who was aiding Missy. The Reese’s cry ‘kidnapping’ and Perkins is locked up by the marshal: a fat, spineless hack named Peale, who licks Jessup’s boots.

Cain beards town boss Jessup in his den and encounters the typical psychopath gun-slinging bodyguard, Curly Red. Cain has a terrific response after being told to mind his own business:

“I’m minding my business now. I’m a lawyer, Mr. Jessup. Part of my business is drawing up wills for people who have not long to live. Have you made your will?”

All the pieces are in place for the big showdown. A trial??? Judge Birdo, the travelling Superior Court judge, convenes the trial in the loft above the livery stable, and he’s a no-nonsense character who runs things his way.

“…I’m the fella in charge…and I don’t want nobody to make no mistake about that.”

“This here is a sawed-off eight-gauge, and she’s loaded with buckshot. I don’t stand for no hollerin’ nor swearin’ nor takin’-on in my court. Should you see any of your neighbors getting’ an impulse like that, you better quiet him quick, because when this gun blows she blows mighty wide, and she don’t take no account of how many innocent spectators is in her way. You, in the back row, take off that hat, and take it off mighty damned quick!”

“This here court demands respect and a lot of it, too! This town is a hell-roarin’ place from all I hear, but I’m the biggest and loudest hell-roarer you ever see, and if you don’t believe it, just start inteferin’ with the processes of this court.”

I was sold on Birdo from the start. He’s the type of character Elmore Leonard might have written. He does things his way and tells everybody in the room exactly how that is. Hiram Dandin, the prosecuting attorney, comes across as some sort of poor man’s Polonious. Dirdo has less than no use for his oration: “You’re findin’ too damned many words.” Pops Reese presents himself as a doting uncle, not the drunken pimp he really is. 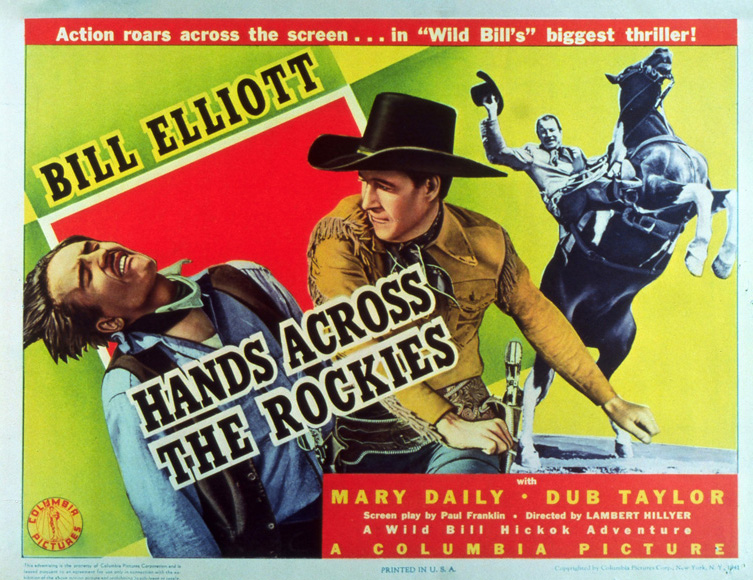 But Cain has summoned some special witnesses who arrive and march down to the front row. They are wives of six members of the jury. Cain has the women examine Missy, in private. Dandin objects, angering jury members who accuse him of not trusting their wives. Cain has turned everything upside down, without drawing a gun. It’s a different kind of western.

Missy’s body is covered in welts from being beaten with the quirt. The judge dismisses the case and sentences Pops to five years for perjury. He gives Peale 120 days in his own jail for contempt of court.

With the courtroom drama resolved, it’s time for some shootin’!

Hi is waiting in the middle of the street, with Dade hiding behind a wagon. Cain is completely calm and cool, firing from the open, making no attempt to avoid shots from the brothers. Dade misses his two shots and Cain kills him. He turns and finishes Hi, who missed his first shot from his carbine.

With the three Reese’s out of the picture, Cain walks into Jessup’s saloon. Jessup is like the cat who ate the canary. But when Red, who was stationed in the balcony for an ambush, falls over the railing, a knife in his back, Jessup screams “in a shrill, unnatural voice.” He snaps off a shot from a derringer, and Cain promptly guns him down. Stringer appears on the balcony and looks down, with a quip.

They catch the next stage out to another town. But there were to be no more stories of Major Cain, for Davis wrote barely a dozen westerns.
Cain was very good at writing characters. He could flesh out several of them in a short story. Cain and Stringer are opposite ‘buddy cops.’ Judge Birdo entertains. Missy’s despair and fear are conveyed in the story’s opening. Pops, Dade, and Hi work. The sheriff, the prosecuting attorney, the jurymen and their wives: Davis was simply very good at developing characters in the confines of a short story.

The story moves from confrontation to confrontation like a runaway stagecoach. Davis constantly moves Cain forward to one encounter after another. And the mixing of a trial with a shootout absolutely works.

While Stringer can be amusing when he talks, there’s none of Davis’ characteristic comedy. This is a cold as iron western. The only real flaw I found was in Cain revealing why he wants to help Perkins. It relates to a dark incident in his own past, and why he gave himself the name of Cain. I understand why he does it, but it feels forced. It’s the only part of the story that does.

This story was turned into Hands Across the Rockies, a 1940 Columbia Pictures release. Cain was replaced by Wild Bill Hickock, played by Bill Elliot. There were six Hickock movies starring Elliot that year. There were some changes (including turning Stringer into a Nigel-Bruceish Watson named Cannonball), but the film is still recognizable as having form from the story. It was a typical b-western that isn’t particularly memorable.

But “A Gunsmoke Case for Major Cain” shows that Davis could write a straight western, with a hardboiled feel. Reading the other stories in Dead Man’s Brand, the point is very clearly made.