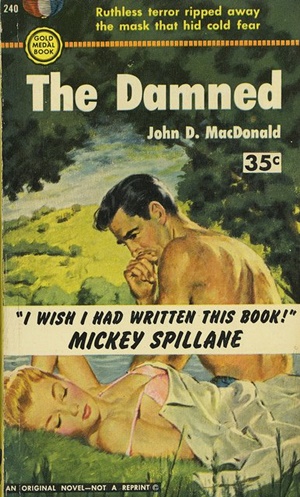 Fans of my writings here at Black Gate (both of you!) know that John D. MacDonald is my favorite author. And I think he’s one of the best in any genre. So today, I’m going to talk a bit about two times that Mickey Spillane, millions-selling author of Mike Hammer, entered into the JDM story.

Especially before the success of his Travis McGee series, MacDonald was “looked down at” during his time because his books were paperback originals. It was rare that he received reviews or high-profile comments. His work sold, but critics ignored it, or dismissed it with a sneer.
Many of his books were published by Fawcett, part of the (still-collectible) Gold Medal paperback line. His first novel, The Brass Cupcake (more on that below) came out in 1950. It was followed in 1951 by Murder for the Bride, Judge Me Not (Hammett-esque and one of my favorites), Weep For Me, and the science fiction novel, Wine of the Dreamers. Which leads us to 1952’s The Damned.

Ralph Daigh, editorial director at Fawcett, let Mickey Spillane read a set of galleys for The Damned. After I, The Jury, in 1947, every other crime writer out there wished he had Spillane’s sales. When the writer came back in to Daigh’s office and returned them, he said, “That’s a good book. I wish I had written it.”

Daigh was a good book man and he wrote it out on a piece of paper and asked Spillane to sign it, which the latter did. And that endorsement was prominently displayed on the cover of the book when it came out.  Spillane’s agent, editor, lawyer (possibly even his pool guy) contacted Gold Medal and said that Spillane didn’t endorse books, and they had to take that quote off of the cover

Unintimidated, Daigh told them all that he had Spillane’s signature, dated, to back it up. They went away. MacDonald remained a fan of Spillane’s.

The book sold two million copies and MacDonald was continuing to hone his novel-writing ability and increasing his sales.  The Damned is as packed full of tension (leading to an explosion) as any book I can remember reading.

MacDonald’s first novel, The Brass Cupcake, was a somewhat hardboiled tale. Along with Judge Me Not, I think it’s the most hardboiled book he produced.

He wrote it for the pulps but his agent, Joe Shaw (the legendary former Black Mask editor), saw an opportunity to make more money and submitted it to Fawcett as a Gold Medal Original. They took it and MacDonald would become the cornerstone of Gold Medal’s mystery/thriller line (just as Louis L’Amour was for their westerns).

MacDonald was appealing to the Mickey Spillane crowd with this book. As an acknowledgement to Spillane, he sent the following parody to Dick Carroll, his editor at Gold Medal:

It was one of those afternoons when the greasy sunshine flooded Third Avenue like a men’s room with a broken john. She came out of the alley lapping at her juicy red lips with her pointed spicy tongue.

Pat shouldered her out of the way. He was picking his greasy teeth with a broken match. A smart cop, that Pat.

“I knew you was going to go kill crazy again, Mike. This has got to stop.”

I knew it couldn’t stop. Not while there were people left in the world. Dirty people in a dirty world. I had to kill all that I could. Even if they lifted my license. He lay there in the greasy alley in the greasy Third Avenue sunshine and he was dead and I was glad I’d shot his greasy skull apart.

“Mike, Mike,” she gasped, stabbing her tongue into my ear. It tickled.

I fingered her haunch, then shoved her away hard. She looked at me with those wide, spicy hot eyes.

“You haven’t fooled me a bit,” I rasped. Then I laughed. My laugh sounded like two Buicks rubbing together.

She knew what I meant. She said, “Look what I can give you, Mike.” She unlatched her Maidenform.

I looked at it. I felt the sadness, the regret. But the anger was there. Pat sucked on the greasy match. He turned his head. He was a good cop.

The first shot nailed her against the alley wall. While she was slipping, her eyes still pleading with me, I wrote my initials across her gut with hot lead. It was tricky shooting.

Pat sighed. He said, “Mike, the D.A.’ll have something to say about this.”

“Screw the D.A.,” I said. My voice sounded like a lead nickel in a stone jukebox.

We walked out of the alley, down through the soggy sunshine. Somehow, I felt very tired.

John D. MacDonald – A Writer’s Writer
A Century of John D. MacDonald
Judge Me Not – The Selling of a Politician’s Self
Birthday Review – Ring Around the Redhead
Steve Scott on Park Falkner

Did Mickey see the parody? (It’s spot on!) If so, how did he react?

Hi Mike – I don’t know if Spillane ever saw it. Or, if he did, commented on it. I think it’s amusing.

Some time, I’ll do a post on the Carroll John Daly/Spillane interaction.

Fritz Leiber did a short story Spillane parody, “The Night He Cried.” Heavy-handed (how could it not be, considering the target) but fun.

I read my first Spillane (I, the Jury) a few years ago. It’s likely to be my last…

Thomas – I’m not much of a Spillane fan. But I recently read some of the ones Max Allen Collins finished (including the short story collection) and I’m warming up a little bit. Not on board yet.

But Carroll John Daly and Raymond Chandler grew on me over the years. Spillane might.

I read the Spillane/Collins western, based on an unproduced screenplay Spillane wrote for John Wayne. I liked it (though one scene of violence was too much for me. That’s a problem I have with Spillane).

A favorite uncle of mine recommended the Travis McGee books when I paid him a visit in 1975. Up until then, I had seen MacDonald’s books on the newsstands and in bookstores, but had bought only “Wine of the Dreamers,” “Ballroom of the Skies,” and “The Girl, the Gold Watch, and Everything.” So I bought and read “The Deep Blue Good-by,” and proceeded to haunt those newsstands and purchased every MacDonald book I could find. I’ve read all the McGee novels, close to 20 other novels, and still have 20-30 somewhere in my basement waiting to be rediscovered. I don’t think I ever saw a Mickey Spillane book anywhere until sometime in the 1980s (?) when Signet republished some of the Mike Hammer books in a less lurid paperback version.I have a half dozen or so, but never read them — yet.

Smitty – I think I’ve read every MacDonald book, except the Judy Garland movie adaptation ‘thing’ he did. I can’t say I’ve loved every one of them, but I don’t recall disliking any of them.

He became my favorite author without any preconceived intentions. Only Robert E. Howard has approached him since, for me.

But I still grab a stand-alone novel a time or two a year and tear through it. And I read a short story now and then.

I wouldn’t mind doing a MacDonald only column when I don’t have a job to work at. His stuff is that goood to me.

I HIGHLY recommend Steve Scott’s ‘Trap of Solid Gold’ blog. It is a FANTASTIC JDM resource, and Scott is the greatest living JDM authority, in my book.

I used two of his essays from the blog for the Park Falkner post a few weeks ago. It’s top quality stuff.

JDM really is at the tip top. I’m one of those heretics who prefer the earlier, non-series novels to the Travis McGee books, good as they are. If there’s a better thriller anywhere than A Bullet for Cinderella, I’d walk a hundred miles to read it.

Thomas – I too am a huge fan of the stand-alones. I’d put The Executioners up with Cinderella (which I quite like).

For some reason, ‘Murder in the Wind’ sticks with me as an almost-great novel, with a great setup. I can’t recall what put me off a bit.

Caper books, business-world settings, politics – there are so many good non-McGee novels.

I’ve said before I think he’s one of the great social commentators of his era.

And I think he’s flat-out, one of the best writers of the 20th century – in any genre.

I’m already working on my next Conan series – one that I will actually write myself this time. I can’t leech off of more talented folks forever. John O’Neill might eventually catch on and give me the boot. Or increase the amount I have to pay to stay on the BG roster…
🙂

And I think, down the line, I’m going to round up another all star roster – this time, to tackle Solomon Kane.

But I think maybe, I could get a dozen or so JDM fans, and have them each write an essay on a favorite novel. I think that would be a pretty great series for Black Gate to add.

Bob, I just visited “The Trap of Solid Gold,” and had to drop a note and say “Thanks!” Wow — I wish I’d known about this ages ago! I plan to be a regular visitor — when I’m not here at Black Gate. By the way, the Spillane parody was priceless — and “The Brass Cupcake” is the only MacDonald book — so far — I’ve read twice. Sometime very soon I hope to start re-reading the Travis McGee series.

Some other Spillane parodies and pastiches, including citations by Bill Pronzini, Matthew Davis and George Kelley in the contents:
http://socialistjazz.blogspot.com/2017/07/ffstories-spillane-parodies-and.html

Or even the comments!