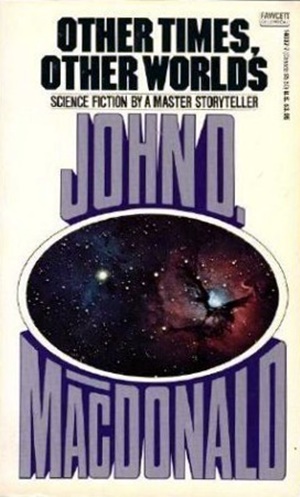 Every so often, I prove that the Black Gate firewall needs some serious tightening up by jumping in and putting up a post where I don’t belong (many readers and fellow bloggers believe that would be the entirety of the Black Gate website…). So, if you’re reading this, the crack web monitoring team hasn’t seen it yet. Don’t tell Steven Silver. He might gnaw through the restraining chain around his ankle and crawl over to my desk in the cellar…basement…journalist’s suite to thrash me.

John Dann MacDonald, my favorite author and one of the best writers of the twentieth century – in any genre – was born on July 24th, 1916. MacDonald, Harvard MBA and a lieutenant colonel in the Office of Strategic Services during World War II, was thirty years old when he began writing for the pulps in 1946. Through hard work and talent, MacDonald quickly became successful, selling to the mystery and sports magazines.

He graduated to the slicks more quickly than most pulpsters and he began writing paperback novels in 1950, mostly for Fawcett Gold Medal and Dell. And in 1960 he created his famous non-private eye, Travis McGee, in The Deep Blue Goodbye. MacDonald wrote over 400 short stories and five dozen novels.

It’s less well-remembered that in the late forties and early fifties, MacDonald wrote a great deal of science fiction: over fifty short stories and two novels. He tired of the genre and essentially quit cold turkey in 1952, writing only seven more stories and one novel (The Girl, The Gold Watch & Everything, which was made into a movie with Robert Hays and Pam Dawber) in the final thirty-four years of his life. He wrote that he tired of science fiction and simply quit writing it.

“Ring Around the Redhead” appeared in the November, 1948 issue of Startling Stories (His “Shenadun” had been in the September issue). It was anthologized in 1953 and again in 1967. I read it in Other Times, Other Worlds, a collection consisting entirely of science fiction stories by MacDonald.

Bill Maloney, an inventor, is on trial for murdering his next door neighbor. There’s no body, just some brain and hair bits. Anita Hempflet, the classic nosy neighbor (you know, the kind that says “I don’t mind anybody’s business but my own” and then proceeds to gossip like it’s an Olympic event) weighs in with her nose in the air, saying that Bill has been shacked up (remember: it’s 1948) with a pretty redhead who seems to be deaf and was wearing some odd, metallic clothing when she appeared.

She adds that Bill and the neighbor argued not long after the woman appeared. Miss Hempflet even asks around and opines that such an immoral girl must have hitchhiked into town. It’s too bad she’s not the one on trial. She reminds me of the really annoying aunts in Jane Austen novels.

Maloney says that a recent atomic bomb mishap at the local military base opened up a strange room in his basement, where he found a large metallic ring. Being an inventor, he realizes it is a portal to another dimension. He extracts all kinds of neat stuff, including Rejapachalandakeena, the gorgeous female. Unfortunately, he can’t return the freaked out woman and he teaches her the basics of English. Accepting the name ‘Keena,’ she reveals that she’s from a society with no war and disease and mental powers, such as telepathy.

Maloney made the mistake of telling his neighbor, Jim Finch, who was immediately enamored with the commercial possibilities. Finch is the clear villain of the piece and he steals the ring, refusing to give it back. He ‘explores’ the other dimensions with all the respect the Spanish gave the Americas in pre-colonial times.

Well, he angers some world and it costs him dearly. Though things look bad, Maloney’s defense rests on Keena explaining everything. Except, the night before she’s due to testify, she disappears. Presumably taken back to her own home. Uh-oh!

I won’t tell you the rest of the story, though things work out pretty satisfactorily in just about all aspects. MacDonald was a writer of the first stripe and his sci-fi stories, while clearly in the nineteen fifties style, are solid pieces of workmanship and a couple I’ve read are quite good.

The story was adapted in 1985 for an episode of Tales from the Darkside, starring John Heard and Penelope Ann Miller. By all accounts, it was forgettable and did not justice to MacDonald’s writing. Sadly, MacDonald’s works have only been filmed twice since this episode. There’s a goldmine of material waiting to be adapted.

While I’ve written about MacDonald here and here at Black Gate, Steve Scott’s blog, The Trap of Solid Gold is the best JDM site on the web you’re likely to find.

I always wonder what MacDonald would have produced had he stayed with SF – not that I’m at all sorry to have his wonderful mystery/suspense work.

Bob, I believe the first McGee was The Deep Blue Good-Bye. Nightmare in Pink was second in the series.

Bob, I’m sure the sterling Mr. Silver is happy to get at least one day off!

R.K. – Oops. Thanks. Nightmare is probably my least favorite in the series. Don’t know how I had that first.

Thomas – Good to see you commenting on one of my posts again! I recall that in The Red Hot Typewriter, MacDonald comments along the lines of scifi was easy and he was getting bored of writing it. I’ll have to look that up again.

I’m not much of a science fiction reader and I’m not all that keen on his stories in the genre, either.

I have found that those writers who complain that SF is too easy and they are getting bored usually aren’t writing very good SF anyway.

Hi Rich – I’m okay with some of his science fiction, including ‘Spectator Sport.’ I’m just not much of a scifi fan overall.

I did think ‘Ballroom of the Skies’ was good and I’ve read it twice. I don’t recall re-reading ‘Wine of the Dreamers,’ though.

It’s the same in that after MacDonald, Robert E. Howard is my favorite writer, but I’m not into his horror stuff (or the genre).

Pretty much any MacDonald is worth reading once. Guy was simply excellent.